BY Heather R Brueck on May 14, 2017 | Comments: Leave Comments
Related : Once Upon A Time, Recap, Television, TV 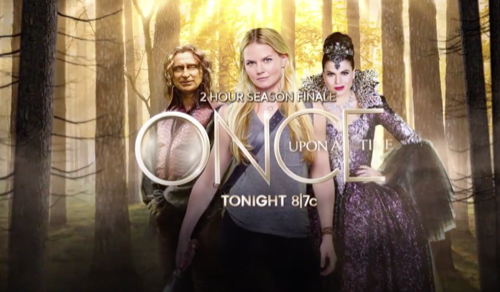 Tonight on ABC their popular fantasy drama Once Upon A Time returns for an all-new Sunday, May 14, 2017, season 6 finale episode and we have your Once Upon A Time recap below. On tonight’s OUAT season 6 episode 21 finale “The Final Battle Part 1; The Final Battle Part 2”  as per the ABC synopsis, “In the sixth-season finale, Henry (Jared S. Gilmore) awakens to a cursed Storybrooke where the Black Fairy (Jaime Murray) reigns as mayor and Emma (Jennifer Morrison) has been in a mental hospital. Meanwhile, Snow, (Ginnifer Goodwin) Charming,  (Josh Dallas) Regina, (Lana Parrilla) Zelena (Rebecca Mader) and Hook (Colin O’Donoghue) are trapped in a crumbling Fairy Tale Land.”

Tonight’s Sunday May 14 Once Upon A Time recap begins now: The show begins in the Enchanted Forrest as Tom is being chased. He makes it home and sends his daughter out with the Once Upon A Time storybook. She has to keep it safe. Henry wakes up on a roof top with the storybook in his hands. He goes to find his mom and she is in the hospital.

As they talk Fiona comes in and takes the storybook away from Henry. Henry leaves but whispers to Emma that she has to resist Fiona and help him because the final battle is near. Snow, Hook and Regina wake up in the Enchanted Forrest and realize the evil fairy was good to her word and ripped their family apart. They must fight the curse. Fiona tells Emma that she must burn the storybook if she wants to be released from the hospital. She refuses.

Snow, Regina and the rest realize that the final battle is really a battle for Emma’s soul. If Fiona can get Emma to stop believing, all of the realms will be destroyed. They have to figure out a way to stop the Black Fairy. Fiona brings lunch to Rumple and ask that he fix her watch. She also offers her support due to the death of his wife.

As Emma loses her faith more and more of the realms are being lost. The characters take shelter in the castle. Henry breaks Emma out of the hospital. Hook and Prince Charming climb the bean stock in hopes of finding the magic bean. Henry takes Emma to the roof top in hopes that she will remember her wedding to hook.

As she stands there her memories start return. She still has doubts and just wants to return to Boston. If she stays Fiona will put her back into the hospital. Henry agrees to help her if she will wait until nightfall.

Gideon is angry that Bella left him. He thinks Fiona was more of a mother to him then Bella ever was. Rumple tries to soften his heart but he doesn’t want to hear it. Regina and Zelena try to work on a potion but most of her ingredients are gone. Evil Regina arrives at the castle and offers to help good Regina fight the Evil Fairy. Henry goes to steal the storybook back and is caught by Fiona. She realizes he is awake and will use him to control Emma. As he tries to run away she pushes him down the stairs.

Rumple asks Fiona to reopen the investigation into Belle’s disappearance. She tries to talk him out of it. Hook and Charming search for the magic bean. They find it but must out run a fire breathing dragon. Fiona shows Rumple photos of Bella enjoying her life in another country.

He needs to move on. Fiona is thrilled he brought her story. Henry wakes up in the hospital as Fiona and Emma arrive. Fiona convinces Emma to burn the book. It the only way to end Henry’s delusions and keep him safe.

Emma throws the book into the furnace and as it burns all the realms are destroyed. The little girl from the beginning of the show returns home to find everything burned. She runs into Tiger Lily who says they must take the book to her mother.

Part 2 Begins: Fiona brings the burnt remnants to Henry and gloats that Emma lost her faith. Not all of the realms have been destroyed. Charming and Hook are still fighting to save their family. Emma leaves Storybrooke to return to Boston.

She arrives safely and finds a manuscript Henry put in her bag. Regina and the Evil Queen don’t have enough magic left in them to connect with Emma to help her remember. Snow finds Charming and he is unconscious. Her kiss awakes him. He reminds her that darkness never wins.

Henry goes to Rumple’s shop and tells him that he is his grandson. He knows that Rumble is awake and he needs his help. Rumple only cares about finding Belle. Henry is on his own. He decides he must fight Fiona by himself.

The Evil Queen tries to fight to protect the castle while the rest of the characters join together and wait. Henry is their only hope. Henry is about to fight Fiona as Emma arrives. She now believes that she is the savior. The realms start to reappear.

Rumple finds Belle hiding and tries to explain that the Black Fairy has done to her. Fiona goes to Rumple’s shop and tells Gideon that she has his heart and needs his help looking for her wand. It is somewhere in the shop. Gideon finds it and Fiona uses it to decipher Henry’s writings. Fiona now knows his plan. Rumple returns to his shop and confronts Fiona.

She tells him that once she wins the final battle the curse will be lifted and they can be a family once again. She will have the power to bring back the dead. Fiona will bring back his first born son.

Rumple is not willing to pay the price that magic costs and kills the Evil Fairy. Before she dies she tells him that evil can never kill good. Only good can kill good. She still has Gideon’s heart and she has commanded him to kill Emma. Gideon confronts Emma and tells her he has been sent to kill her.

Belle returns to Rumple. The spell has been broken and she is awake. Henry arrives and he and Emma escape from Gideon before he can stab her. Rumple searches for Gideon’s heart. Now that the Black Fairy is dead the curse on all the characters has been broken. They all return to help Emma and Henry. Emma has to hold Gideon off until Rumple can find his heart.

Gideon and Emma fight with swords in the street until Emma throws down her sword and Gideon stabs her. She dies in the street but then Henry revives her with a kiss. Rumple finds Gideon’s heart and knows he must return it to him. Belle and Rumple find a baby and realize it is Gideon. They have a fresh start. It is their happy ending. Belle says no a happy beginning.

The final page of Henry’s book writes itself. It says, “Both good and evil did the right thing, faith was restored and the final battle was won”. Snow says the story isn’t over. All the characters return to the Enchanted Forrest to be together forever doing what they love. They are also happily together in real time. Years later the girl from the beginning of the show arrives in Seattle and delivers a copy of the story to an adult Henry Mills. She tells him she is his daughter and he has to come with her because his family needs him.