BY Annemarie LeBlanc on April 16, 2017 | Comments: Leave Comments
Related : Once Upon A Time, Recap, Television, TV 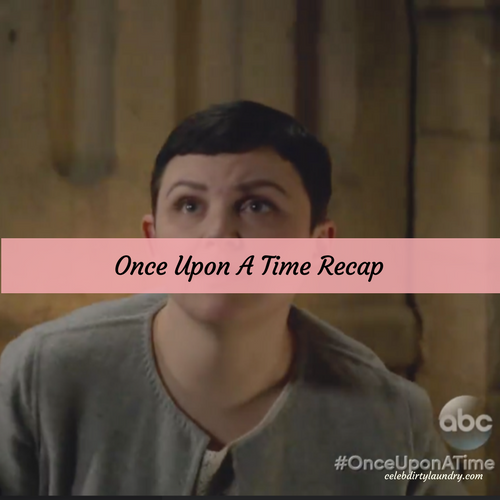 Tonight on ABC their popular fantasy drama Once Upon A Time returns for an all-new Sunday, April 16, 2017, episode and we have your Once Upon A Time recap below. On tonight’s OUAT season 6 episode 17 “Awake”  as per the ABC synopsis, “Still trapped in Neverland, Hook aligns himself with Tiger Lily, (Sara Tomko)  hoping to find a way back to Emma. (Jennifer Morrison) Back in Storybook, Regina (Lana Parrilla) works to break the sleeping curse that David (Josh Dallas) and Snow (Ginnifer Goodwin) are under, and Gold (Robert Carlyle) denies The Black Fairy, (Jaime Murray) which brings the two of them to a fearsome impasse.”

Hook is running from the lost boys in Neverland. They corner him. They want to make him pay for Pan. Hook takes out his sword. He’s ready to fight and get it over with. One of the lost boys is shot in the neck, its Tiger Lily. She and Hook say their hellos before she takes him down with a shot to the neck. He drops to the ground.

Emma learns from Regina about the final battle. David wants Regina to break the curse. Regina isn’t ready yet, she is still testing. David tells her to do anything she can, even if it isn’t ready.

Flash back to the past

Snow is walking through Storybrooke to deliver flowers to John Doe. Everyone in the town is glum and moody. She bumps into Regina, who says that John Doe may never wake up. Snow picks a flower and brings it to John Doe. He wakes. He is afraid of the evil queen. Snow thinks it is something she did wrong. She thinks he is delusional. David explains further. He touches her hand. She realizes he is Charming.

Regina has prepped a potion. Snow knows it is a risk but she is willing to do it. David is sleeping. Emma is awake. The potion backfires. By the end of the day they will both be asleep.

Snow gets Charming clothes so they can leave the hospital. Regina shows up. She wants to know where John Doe went.

David tells Emma the bad news. David gets a last minute idea – pixie dust. Meanwhile, the black fairy shows up at Rumple’s shop. He is shocked. Gideon is with her. Belle comes from the backroom. The black fairy tells Rumple that when the darkness comes he will join her.

David pays a visit to Rumple’s shop. She mentions Emma. Rumple decides to help him. David wants to know where his daughter is. Rumple tells him that dust from a pixie can reunite anyone.

Tiger Lily wants Hook to deliver a weapon to another realm. He doesn’t want to. He wants to get back to Emma. Tiger tells him it is to help the savior. They realize they are talking about the same person. They develop a plan.

Regina and Snow are out in the woods looking for John Doe. Regina catches on that Mary Margret is Snow.

Emma and Snow locate the pixie flowers in a field. The fairy and Gideon come out of the woods. The black fairy tells Emma that this isn’t their time to battle, she will know when it is time. Snow threatens her. The fairy laughs and disappears with Gideon. The pixie flowers disappear with them.

Hook and Tiger Lily watch the lost boys dance around a fire. Tiger Lily distracts them while Hook tries to get home through the magic rock.

The lost boys pull him down. He manages to get the weapon to a dark magical flying figure who will take it to Emma.

Snow and Charming finally meet up. They are going to save their daughter. Rumple comes out of the darkness. He can’t let them find her. He has the potion that is the only way forward.

Emma finds one lonely pixie flower in the snow. Snow and David use the dust. A magical door appears. They see Emma, as a child sitting on a bed. Snow can’t make herself go through the door, she has to let Emma become the savior. David disagrees. Snow tells him that they have to believe that she is strong enough to grow up without them. They shut the door and kiss goodbye. David takes the potion quickly as the search party looks for them.

The black figure brings Emma the wand. She cries. She needs to find out where Hook is. Snow gives her the pixie dust to find Hook. Snow doesn’t want it to break their sleeping curse. She wants Emma to be happy.

Hook and Tiger Lily are caught by the lost boys. Emma comes out of a magical door and grabs Hook. She brings him home. They apologize to one another. Hook proposes. Emma accepts. The town gets together to drink from the cup to break the curse while Snow and David sleep. They wake to find everyone sleeping. They wake them. It worked!