Once Upon a Time Spring Premiere Recap 3/5/17: Season 6 Episode 11 “Tougher Than the Rest”

BY Sarah Luoma on March 5, 2017 | Comments: Leave Comments
Related : Once Upon A Time, Recap, Television, TV 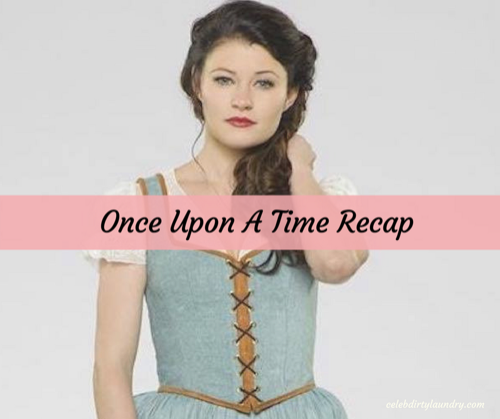 Tonight on ABC their popular fantasy drama Once Upon A Time returns for an all-new Sunday, March 5, 2017, episode and we have your Once Upon A Time recap below. On tonight’s OUAT season 6 episode 11 Spring Premiere “Tougher Than the Rest”  as per the ABC synopsis, “Gideon (Giles Matthey) makes a confession to Belle (Emilie de Ravin) and Gold (Robert Carlyle) concerning his past whereabouts. Meanwhile, David and Hook try to stop Gideon from confronting Emma; (Jennifer Morrison) Regina worries that an alternate world presents a better outcome; and Emma learns how to change her fate.“

It’s Minneapolis, the winter of 1990, a little girl tears the pages out of a book to kee warm outside under a bridge. A teenage boy approaches. He asks her what she’s doing. She ran away from a crappy group home. He asks her not to burn the story – The Ugly Duckling. It’s his favorite. He thinks it’s a beautiful story about belief. She sees it as the opposite. She changes her mind and doesn’t burn the story after he tells her things will get better. He brings her to the local police. She tells an employee that her name is Emma Swan.

Present Day in an alternate universe

Emma and Regina hand over their jewelry to a man with a bow. They hear horses in the distance. The man runs off. The women hide. The men on horses take off. Emma has an idea – she thinks she knows how to get back.

Back at home, David thinks this is all on him. Hook reassures him. They are going to work together.

Henry has had visions of defeating the savior. Once he kills Emma Swan he will finally be a hero.

Emma and Regina watch a group from a distance. Emma tells Regina to stay behind. She goes to visit Pinocchio. He is happy to see her. Emma and Regina tell him that they need his help to get them home. They need the wardrobe he once had. Pinocchio doesn’t have it anymore, though. But he has his father’s old tools. He can replicate it. Emma turns to see what Regina thinks, but she is gone. There is a note. She trusts that Emma will get home, but she isn’t ready to go. She needs to find answers. Is robin better off without her?

At the local pub, Regina sees the man with the lion tattoo through the window. She enters. Everyone runs away, shouting the Evil Queen. The man stays put. She talks to him, asks him if he is happy.  He is. She gets up to leave. He wants to know why she cares. She is about to tell him when Nottingham and his men come in. They take them away.

Emma and Pinocchio are in the Enchanted Woods. He remembers how she liked tea and dresses. Where she comes from she is a savior. A man comes out of nowhere, its Captain Hook. He is there to save Emma.

Rumplestiltskin tries to talk to Henry about his path. His childhood was full of pain. He is to blame. He taunts Henry to hit him. When he doesn’t, he offers him help, but Henry turns it down.

Captain Hook has Pinocchio at knife point. Emma begs him to stop. She doesn’t need rescuing. The men go round in circles. Emma zaps Hook with her powers and sends him back. During the fight, Rumplestiltskin’s magic is lost. He can’t help Emma.

Robin and Regina are in a cage. He is mad that they are trapped. He tells Regina that he steals from the rich to make himself rich. Regina is confused. He must be Marian. He confesses that he hasn’t been happy for a longtime. A yell comes from the distance.

David can’t wake Snow. He tells her that he is going to find their daughter and fix this. Belle shows up and tells Hook and David that her son Gideon is the one trying to kill Emma. She needs to find him and talk to him. Talk him out of it.

Regina and Robin are thrown into a cell. He believes her when she tells him about an alternate universe where he is dead. He is happy that it sounds like a good life even if it is short. He breaks them out.

Emma is going through the tools. She finds a box. It has swan inside. She asks Pinocchio why it has her name on it. His father gave it to him. She realizes that he is the boy under the bridge who loved The Ugly Duckling. She tells him he can help her by believing. They return to the tree. He begins carving the tree, finishing up at his shop.

Regina arrives with Robin. She sees the tree. Regina apologizes to Robin. He gives her his lucky feather. It was her Robin’s feather. She thinks he leaves on in her. Emma tells her to bring him back. Regina says that he isn’t real. Emma talks her into grabbing her fate. Robin is in. The three leave through the magical wooden door.

Emma and Regina make it to the other side. Robin doesn’t. Regina needs a minute. Seconds pass. Robin comes out of the tree. Robin wants to know where they are. Storybrooke, Regina tells him.

Gideon approaches Emma on the dark street. He calls her Savior. He begins fighting her with his sword. She fights back. He takes her sword. The gang shows up. Belle yells to him. Stop, you don’t have to do this. He freezes them in their tracks. He is going to kill her. She zaps him back. She is on him with a knife to his throat, but he manages to disappear. Emma is reunited with everyone, hugging her son. She tells them everything is going to be all right.

Belle tells Rump at the wishing well that Gideon has the power to change his choices. He doesn’t want him to kill Emma. They decide that they will help him together. Meanwhile, Gideon smashes the clock tower.