Pretty Little Liars Recap 4/25/17: Season 7 Episode 12 “These Boots Were Made for Stalking” 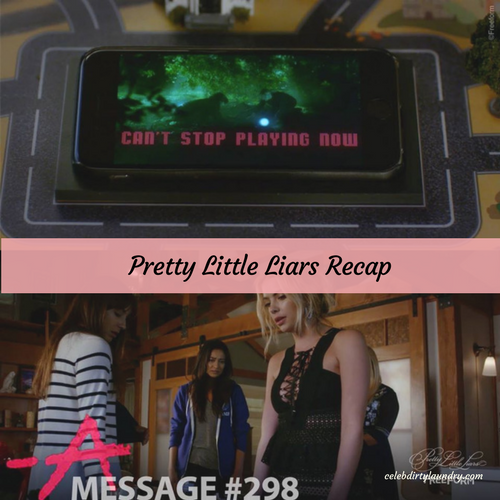 The girls all stand around the board game trying to figure out who is behind it and who knows they dug up Rollins. Emily is done. She doesn’t want to play this game.

Aria is leaving Ezra’s when a reporter stops her. He is looking for Ezra. He wants to do a human interest piece being united with his fiancé. Aria corrects him. She is he fiancé. She walks off.

Em and Paige are talking in the locker room about Ally. Addison overhears them. Em tells her to get to class. Spencer comes home to see her mom on the phone. They hang up. Spencer wants to know how long her father is going to avoid her.

Mona shows up at Hanna’s. She has the dress Katie wants to wear. It’s a dress Hanna isn’t willing to let her wear. She isn’t telling her why.

Em comes in to Ally’s class. Addison is in there. Em tells her there isn’t any record of her leaving early. She missed practice while her team was working. Addison leaves the room. She stays outside the room, spying on Ally and Em. They hug. Addison takes pictures.

Hanna explains to her boyfriend that Claudia really damaged her confidence when it came to the black dress. He reassures her. They kiss.

Addison asks Paige to talk. She was benched for skipping practice. She skipped because Em makes her uncomfortable. She is touchy, over the line and watches her change in the locker room. Paige asks her to forward the pictures she has on her phone.

Aria visits Holden. He has a lot of cooking to do. She offers to help him. He declines but then accepts. She takes off her ring and puts on an apron. She is still bothered by that reporter. She asks Holden if he thinks Ezra was engaged to Nicole. Maybe she didn’t know. Maybe he didn’t mention it because she was missing.

Paige tells Em what Addison told her. Em is angry. Paige will handle it before Em does anything about it.

Spencer meets with the Detective Fury after showing him the letter she found from her biological mother. Jenna comes in, interrupting them. Fury asks she has been. Hiding she explains. But she can’t any longer. Jenna explains that Noel wanted to kill her too. He was a sociopath. He kept telling her that some of the money Charlotte left behind was hers. She was going to use it for her eyes. He recruited her, he wanted the money. He lured her to her own school so he could get rid of her too. She brought the gun to protect herself. Everything she said to Spencer was for Noel’s benefit. Spencer gets angry. Fury tells an officer to escort Jenna to another room.

Jenna leaves. Spencer tells Furey that Jenna is the real sociopath. He tells her that he can’t charge her. Unless Spencer knows something.

Hanna can’t get in touch with Claudia. She gets a text from Spencer about Jenna. Spencer goes to visit Aria. She tells her about Jenna and how Furey is helping her find Mary.

Em is at the coffee shop. Jenna shows up. Em also sees Addison there, on her phone alone.

Spencer returns home. She tells her mom she will be looking for other work. Her mother tells her that they have decided to sell the house. Spencer tells her to do what she wants. Their home doesn’t feel the same anyways.

Aria gets an alert. An article featuring Ezra and Nicole has been published. They look cozy and in love.

Hanna and Mona are at a restaurant. Jenna comes in. She is wearing one of Hanna’s dresses. Mona asks her where she got it. She won’t answer.

Em thinks AD is behind Addison. She wants the key to the barn. Ally doesn’t want to give it to her. Em wants answers. Ally agrees to go with her.

Hanna and Caleb see Jenna outside a cobbler’s shop. Caleb gets out to ask her what she is up to. She is there to rehearse for a show. Caleb warns her. Hanna goes into the shoe shop. She calls to the owner but he doesn’t answer. She goes in the backroom. It’s dark. She is locked in by someone unseen.

Ally and Em are delivered a video on the game. It shows Addison with her boyfriend. She is with him at the same time she should be at practice.

Hanna yells for Caleb. Someone begins drilling random holes into the walls. Hanna drops to the ground. Caleb comes in to save her. She sits in the corner in shock.

Em confronts Addison in the locker room. She starts to yell, but Paige comes in and stops her. Paige has an email sent by Addison to another student in computer class, bragging about how she was planning on getting rid of Emily. Her father is in the principal’s office waiting for her.

Aria asks Holden if she should return the ring to Ezra.

Em checks her mailbox at the school. She finds a puzzle piece. After seeing it she receives a text from AD. She brings it to the girls. They don’t know what to make of it. Someone is watching them through the window while they talk.