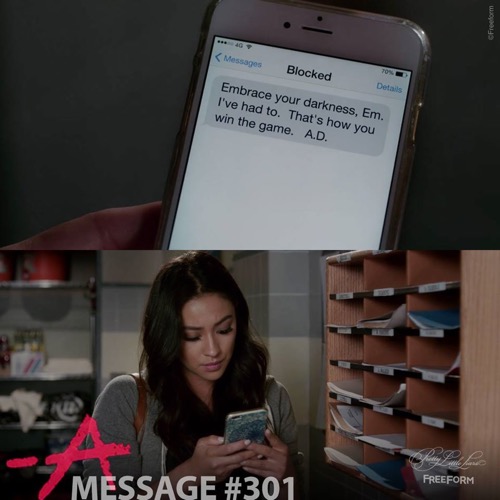 Spencer wakes up to the sound of a baby crying. It is coming from the phone and she can’t get it to stop. She calls the other girls in and they try to think of a way to make it stop and also to figure out who is doing it. Hanna says she has to keep the phone because it is her turn to play. Hanna has an article the front page of the paper about her designs. Caleb, Hanna and Emily have a drink to celebrate. Emily reads further and sees that the paper says Hanna stole the design of the dress. Spencer runs into Toby and he says Yvonne is out of the coma and improving. The detective shows up and asks Spencer out. Hanna asks Aria’s helping in figuring out who says she stole the design. Hanna thinks it might have been Jenna. Caleb thinks Sydney is the best bet in finding Jenna.

Aria says she knows she and Ezra will find their way back to each other again. Emily talks to Toby at the hospital as Yvonne sleeps. She wake ups and says Toby. Hanna gets a message on the phone that it is time to play and that she needs to open the door. Just then there is a loud knock at the door. Caleb answers it to find a mannequin with a Hanna’s face sewn on it. There is a string that Caleb pulls and the mannequin says please see the appendix.

Spencer and the detective play ping-pong. Yvonne is able to do some simple tasks and Toby asks her to marry him today. He doesn’t wait another minute. She says yes. Lucas meets with Hanna to prepare for their meeting. She is nervous that the newspaper article will spook the investors. Aria and Emily search for Sydney and realize she was at the same benefit as the senator’s daughter the night she wore the dress.
Caleb scans the game trying to figure out who it is powered but comes up with nothing. Hanna cuts open the mannequin at its appendix and blood spurts out. She finds an envelope that says “wear me”.

Spencer and the detective have fun together. They kiss. Emily goes to talk to Sydney with a hacker device in her purse. The devise will let Aria download all of the information from Sydney’s phone. The bag has a very short dress in it that Hanna knows if she wears to the meeting with the investors it will blow the deal. Caleb encourages her not to wear it. He says just flip the board and stop playing the game. Sydney asks Emily why is she involves in this high school drama.

Aria sees that Sydney has an appointment at the Eye Institute and she and Emily head there to see if Jenna shows up. Jenna doesn’t show up and Sydney tells them she doesn’t where she is and that she is dangerous. Aria puts a GPS tracker in her bag as she walks away. Hanna heads to her meeting wearing the dress. Caleb pries a piece of the game board off and is sprayed in the face by a strange substance and can’t breathe. Spencer calls 911.

Hanna and Lucas are about to meet the investors but she gets a text that Caleb is in the hospital and she leaves to be with him. Toby and Yvonne get married. Caleb is fine and Hanna gets a message on the phone that she didn’t finish her turn so she loses. They girls bicker but Emily says they have to stop. The game is trying to make them turn on each other so they don’t focus on figuring out who AD is. Emily sees that Sydney is on the move and goes to follow her. Toby tells Spencer at the hospital that Yvonne died. Aria comes home to find Nicole in her living room. The detective opens an envelope that says Rosewood PD and finds a severed finger.