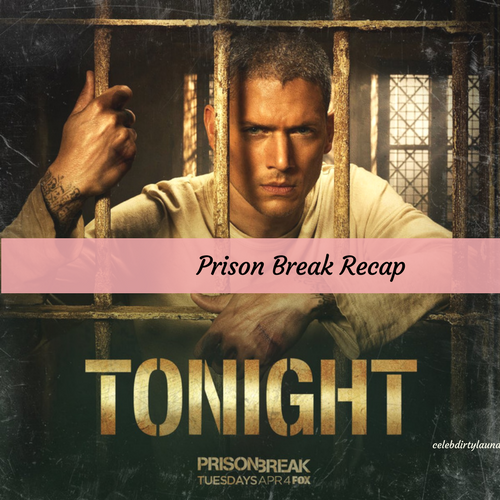 Tonight on FOX in the next chapter of their popular drama Prison Break a new Tuesday, April 4, 2017, premieres and we have your Prison Break recap below.  On tonight’s Prison break season 5 premiere called, “Ogygia,” as per the FOX synopsis, “It’s been seven years since Michael Scofield (Wentworth Miller) was presumed dead, but when clues suggest that he might still be alive, Lincoln Burrows (Dominic Purcell) reunites with Sara Tancredi (Sarah Wayne Callies) to help track down the truth.”

He says the dead talk, if you listen, they are there with you, reaching out, trying to tell you something. Not all deaths are the same, some are real while others are a story; but the question is, do you believe the story and was the man who died who you thought he was?

At Fox River Penitentiary, Theodore “T-Bag” Bagwell is given his walking papers, his laptop, money and an envelope with no return address. In Chicago, Lincoln is being chased by a car full of gunmen whom he owes 100 grand. He taunts him saying he was the big tough guy who made it out of the neighborhood, only to come back to his roots, nothing but a small time crook who can’t pay his debts. He warns him that he will find him and open him up.

Lincoln arrives home to see T-Bag on his deck, he threatens him to leave or he’ll crack his skull open. T-Bag shows him the envelope he received saying fate has joined them at the hip again. He says he has no angle to come there and inform him that his brother might actually be alive; inside the envelope is a picture of Michael behind bars.

Once inside, Lincoln says it is impossible, both wondering why it was sent to T-Bag. He re-reads the words, saying he is trying to help him, when he questions who sent it and why; Lincoln tells him to get out.

Lincoln lands in Syracuse, New York; after he rents a car, he notices another couple who rented from the same place are following him; they turn off and suddenly there is a big pickup behind him. He is just being paranoid. He comes to see Sarah, saying he wasn’t in the right head space to see her or his nephew but now it was impossible to stay away.

She looks at the picture and believes someone has a sick sense of humor. She understands why he would want it to be true, but before they could discuss it any more; Sarah’s husband, Jacob Anton Ness (Mark Feuerstein) comes home. He learns his nephew, Mike idolizes both Lincoln and Michael. When Jacob and Mike leave the room, she tells him to consider the source this came from, even if they both want it to be true.

T-Bag is in a hotel room when he gets a notification, about a prosthetic research appointment. Lincoln visits Michael’s grave, saying Sarah is right and that he has fallen back into his old ways, something he wouldn’t have tolerated, but admits he does have good in him and it’d just be nice if he was there to help him find it.

Lincoln notices something on the photo and erases some of the lettering revealing the word “Ogygia”. He discovers that Ogygia is a prison in Yemen, he decides there is only one way to figure out if this is true and digs up Michael’s grave.

T-Bag goes to see Dr. Whitcombe, director of prosthetics, who tells him this meeting was private because he didn’t want people to see him associating with someone like him. He announces that T-Bag is his first recipient to receive this new hand via an anonymous donor. He has booked a lab and if he is interested.

T-Bag looks outside and repeats the words that were on the picture. Lincoln opens the coffin and discovers there is a body in there, but the head is wrapped in newspaper. He drops back at the shock of bugs and smell.

Lincoln rips back the suit, digging through everything, finding it wasn’t a body just balls of something. He looks to see if Michael left him something but nothing is there.

As Lincoln leaves and is stopped at an intersection, when the light turns green the man who was at the car rental places pulls up beside him and takes control of his car’s computer, causing him to crash. Lincoln is thrown from the car, the man attempts to see Lincoln when a witness stops to see if he is okay, he says he will call police.

Lincoln calls Sarah and informs her that he dug up Michael’s grave and there was nothing in it. He warns her to be careful because someone just tried to kill him. Just as he is describing the truck as the second vehicle, she sees it at her house, tells Jacob to get the gun in the brick wall.

She calls 9-11 saying there is an intruder in the house, while Jacob grabs the gun. She grabs Mike and holds Jacob down after he was shot in the leg. At the hospital, Mike confronts both Lincoln and his mom saying this has to be able his real father because he can see it in his mom’s face.

Sarah wants to know if Michael is alive where is he and why did he abandon his own son. Lincoln says they need to go to Yemen to find out and fight back. Sarah is called in to see Jacob and Lincoln says he will go to Yemen and find someone to help him there.

In Buffalo, NY Lincoln visits Benjamin Miles “C-Note” Franklin (Rockmond Dubar) and shares what he knows about his brother. He tells him that there must be some pretty powerful players who are able to keep this a secret for 7 years.

One of his friends says the photo is legit, C-Note calls the prison and they tell him there is no Michael Scofield there. He says Yemen is on the brink of war and no white American man is safe to go there right now. Lincoln learns someone is erasing his brother from history.

Lincoln is determined to go to Yemen, C-Note suggests that Michael is not caught in the middle of something and he could have possibly faked his own death. He tells Lincoln to think twice before going into a war zone.

T-Bag shows up to have the prosthetic and bickers about being put under for the surgery. Just before he goes under he says, “Fate you are a mysterious bitch, why are you doing this to me?”

Lincoln puts on the suit jacket his brother had on in the casket, he hears a noise and punches the man before seeing who it was; turns out it is Fernando Sucre “Sucre” (Amaury Nolasco) who says Michael is his best friend and he is going with Lincoln.

At the airport C-Note is coming with Linc and Sucre, he can help because he can speak Arabic. Linc says there is going to be a time he will need him, and Sucre tells him he better call him when he finds him and for anything he needs. The people who attempted to kill him and Sarah earlier, take a photo of Linc and say they need him gone from this world, where no amount of digging can bring him back.

Linc notices they are the only two coming into the country, they are greeted by one of C-Note’s contacts who drives them to their destination. C-Note says this isn’t right, he tells Linc to grab his stuff and for them to go, the exit the cab and meet men with heavy chains.

They get into a physical fight, managing to beat the men. C-Note says, Greetings from the US prison system bitches!” Linc finds a phone and tells C-Note they have been set up. Sheba (Inbar Lavi) arrives revealing someone at the airport told her they got into the wrong cab.

T-Bag’s surgery is complete, as he wakes up the doctor says it went well and he is free to go. He wants to know what the doctor put in him and who is behind this. The doctor tells him the benefactors only identify themselves by one word and his was Outis which is Greek for “Nobody”.

In Yemen, Linc washes up, as he looks closer at the suit jacket and it says Custom Made For Kaniel Outis. He returns to the living room and meets Omar (Akin Gazi) who can arrange a visit to the prison. There is a man matching his brother’s description, but he must give up his US passport to see him.

Omar explains they will keep it, as a US passport is like gold there and can be a ticket to freedom for someone else. Sheba says it isn’t ideal and C-Note begs him not to do it, but Lincoln hands it over. Omar promises he will see his brother soon.

They arrive inside the prison, Sheba and C-Note speak to the guards who say there is no Michael Scofield in the prison; Sheba says Omar is her most trusted ally. They show him the picture, and the guard says Kaniel Outis; Lincoln says that is his name and the guard says.

C-Note tells Lincoln that Kaniel Outis is a big time terrorist that they have in the prison for murder and working with ISIL trying to take down the government. Linc doesn’t believe that is his brother Michael.

Back in the US, Mike asks his mother what his real father was like. She says he is a storm, was beautiful and frightening and mysterious, someone who would show up in your life like the clear blue sky and then he would disappear just as quickly. Mike says storms always come back, she says the question is when they come back, have they changed.

In the prison, Linc meets Michael. C-Note records the conversation. He says he isn’t Michael and has no idea who they are. He shows his hands that have open eyes tattooed on them; Linc begs for Michael to tell him what he is doing. He cries as Michael ignores him.