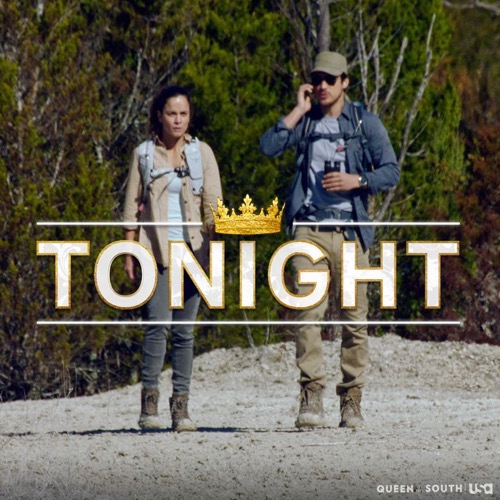 Tonight’s Thursday June 22 Queen of the South recap begins now – Refresh Page often to get the most current updates!

Teresa and Guero are shown three months earlier in bed as he gets a text from Epifano. He needs him to make a run. As Guero gets ready to take off in his plane the DEA come and arrest him. As they drive away Guero’s plane explodes. Guero has the DEA agent call Teresa to tell her he is dead and that she needs to get out of the house NOW.

Back to current time, Guero is telling Teresa the story of the day he “died”. He asks for her forgiveness and asks if they can pick up where they left off. As they talk two DEA agents enter the bar and arrest Teresa. He says he didn’t set her up as she is taken away.

The head DEA agent tells Teresa they need her to cooperate with them in their investigation of Camila. He can keep she and Guero safe. If she doesn’t help them she will be deported and Epifano will surely kill her. Teresa returns to Camila’s compound and they talk about Epifano’s plan to flood the Texas market with his product. They have to cut off his supply route before his drugs can reach Texas. Camila send James and Teresa to the border to stop Epifano.

Epifano and the Colonel meet with Reynoldo to assure him that they can move his product safely. Izzy ignores a call from Camila. Camila leaves a message telling her Happy Birthday and she loves her. Camila meets with her lawyer who reassures her the DEA will not be a problem for her, especially since Teo’s recent death. James and Teresa find the entrance to Epifano’s tunnel at the border and realize Epifano has the military working for him now. Teresa is bitten by a scorpion as they leave the desert.

Camila’s lawyer meets with the DEA who ask about Teo’s suicide. They also ask to see Camila’s files. He gives them two boxes he had ready for them. James is captured by Epifano’s men before he and Teresa can get out of the desert.

It turns out it wasn’t Epifano’s men but rather a militia that caught James. Teresa makes it to the truck but drives right into the militia’s camp by mistake. She is starting to hallucinate from the bite. The man in charge gives Teresa medicine and she tells him about the tunnel being used to move drugs. They join forces to blow up the tunnel and stop the drugs from coming into Texas. The DEA reviews Camila’s files but find nothing. Guero creates a distraction and gets away from his DEA tale.

James tells Teresa it was stupid to come back for him but he won’t forget it. The Colonel tells Epifano that the tunnel has been blown up and three men were killed. Epifano is furious and tells him to go clean up his mess. The Colonel makes a threat towards Izzy and Epifano says he will kill him if he ever says her name again. Camila gives Teresa a BMW as a thank you for her work on the tunnel. Teresa meets with Guero and tells him she won’t work with the DEA. She chooses Camila. She wants him to come work with Camila too. He has to decide what he wants.