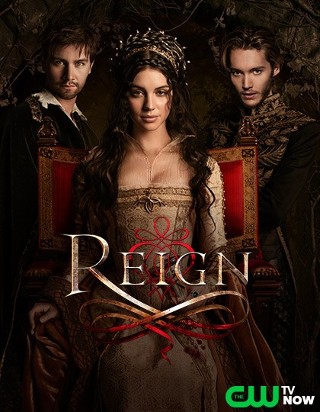 Reign on the CW continues tonight with an all new Friday, February 10, season 4 premiere called “With Friends Like These,” and we have your weekly Reign recap below. On tonight’s Reign’s episode as per the CW synopsis, “In the fourth-season opener, Mary (Adelaide Kane) tests her brother after he meets with John Knox, (Jonathan Goad) because she’s unsure about whom she can trust. Meanwhile, Elizabeth (Rachel Skarsten)  schemes to sabotage Lord Darnley’s  (Will Kemp) relationship with Mary.”

So make sure to bookmark this spot and come back between 8PM – 9PM for our Reign recap.  While you wait for our recap make sure to check out all our Reign photos, news, pics, videos, recaps & more, right here!

Reign season 4 premiere begins with Queen Mary (Adelaide Kane) sword training in Scotland, determined to be the winner between her and Queen Elizabeth (Rachel Skarsten). Mary discusses marrying Lord Darnley (Will Kemp) and hopefully produce an heir, unlike Elizabeth who refuses both. She insists that Scotland is Protestant now and even if she were to marry a Catholic man, it will remain Protestant.

In England, Elizabeth is meeting with Lord Darnley’s mother, who quips that he isn’t there because she can barely read letters these days; but Elizabeth confronts her with the fact that she is exchanging letters with Mary. Elizabeth reveals that Mary is her enemy and if Darnley pursues her, he will be her enemy too. She orders that Darnley comes to court or she will have him dragged there on his knees.

In Spain, the Queen and her ladies are joking about converting their people to Catholicism. She says they don’t force them to convert, but after torture if they agree, then they have simply agreed. Don Carlos (Mark Ghanime), her stepson, comes running in from the forest naked shouting that he loves her, and guards drag him away.

In France, the Queen of Spain shares her tales of Don Carlos with Catherine (Megan Follows); she says the Prince of Spain came to France whole and returned with a big stick sticking out of his skull when he returned; Catherine says it is not her fault. She tells Catherine they need to strengthen their Catholic ties.

She turns to Princess Claude (Rose Williams) and talks about her marriage to Martel (Lewis Kirk). Claude is upset and confronts her mother about promising her she could marry Leith (Jonathan Keltz).

Greer (Celina Sinden) comes to visit Mary where Mary confirms that she doesn’t trust her brother. Greer learns Gideon (Ben Geurens) refuses Mary’s request to seduce Elizabeth, so they are no longer together. Together Greer and Mary mourn for Lola when Mary doesn’t feel well but she orders for Greer to stay with Lola’s parents.

Mary passed out in the carriage after she asks the driver where they are going since the castle is in the other direction. Greer arrives back at the castle and informs James (Dan Jeannotte) that Mary has been kidnapped, and he believes he knows who took her.

Mary awaken in the North where an Earl admits he drugged her in the communion wafer. She escapes the room to see everyone dancing, they are prepared for him to marry George, the Earl’s son. She is told she has to marry him in order to keep her throne.

Gideon visits with Elizabeth telling her Mary maintains their innocence and she didn’t attempt to kill Elizabeth. She orders that Darnley needs to be found and Mary needs to be neutralized. Gideon goes to see Narcisse (Craig Parker) in his dungeon, asking him to trust him that Mary would never harm her friend and his wife, Lola. Narcisse says she would if her country was at risk. Together they believe Renee, the nanny of John was the one who betrayed them, and now she has Lola’s son.

Claude is furious with her mother, saying Leith is alive, she can feel it in her blood. Catherine tells Claude to be more diplomatic and they need to keep their alliance with Spain. She doesn’t want Claude to marry Martel because she had his father killed. They are interrupted by Martel asking Claude to consider their union. He produces a letter she wrote to Leith that they found on a burnt body.

Gideon arrives at Renee’s offering to help her and the boy, confirming he knows she was involved in the assassination attempt of Elizabeth. He takes John but Renee is killed by archers outside.

John Knox (Jonathan Goad) offers to rescue Mary, simply to stop her from marrying a man from the North, a Catholic. James feels like he is betraying his sister but Knox says its better to choose the good side for now. The Earl tells her if she doesn’t marry his son, he will make sure the entire kingdom turns against her.

Elizabeth is angry Gideon didn’t find Darnley for her and accuses Mary turning him against her. He encourages Elizabeth to meet with Mary and talk; she says they are pawns in a much larger game and the last thing she wants is to know her and feel for her if one day she needs to kill her. He brings Elizabeth to John and asks her to explain why his mother is never coming back.

As they gather for dinner in France, Catherine stops Claude from killing Martel. She reveals Martel had Leith killed because she knows for certain the letter he had was not with Leith when he was burned, it was in the castle. Catherine promises she will help her kill Martel and from now on she must always remember her mother is always on her side.

George arrives to help Mary with her dress, where he says it wasn’t his idea and his family are good people. She taunts him about never being with a woman and when she tells him to take off his belt, he falls to the ground. She manages to kill one of the guards, she steals a horse and escapes.

James and his men are on the road when Mary comes galloping up. James says she needs to return to the castle while him and his 100 men forge ahead. Mary demands to know what he promised Knox in return for his help. Mary is furious that he will kill her strongest Catholic supporters and orders them to follow her and if the Earl doesn’t agree, he is to die.

Elizabeth tells Narcisse that Knox is the enemy but he blames Elizabeth for his wife’s death. He tells her Lola was not her friend, but her prisoner. Elizabeth says the reason Lola agreed to come was to get away from Narcisse; because of his help he is being released from the tower and is able to be with his stepson John and France can negotiate his freedom.

Mary tells the Earl, as his Queen she is to beg for her forgiveness but he won’t beg since she surrounds herself with Protestants and offers to protect her. She questions her brother, James’ loyalty telling him to help her bring order and be the executioner. She orders him to kill the Catholic saying he cannot play both side and if he wants to stay her adviser he will do as she says. He kills him threatening to kill all the Catholics. Mary tells them to pledge their loyalty to keep their lives.

Catherine and Claude walk together, and Martel drops with a rope around his neck. Catherine comforts her saying justice has a price. Claude is devastated as Catherine presents a suicide note to Queen Louisa of Spain. She asks her mother if she did it. Catherine says she could do an inquiry but it wouldn’t look good.

Louisa reveals she will be staying indefinitely and Catherine is happy that Spain is stepping in to take care of France. Meanwhile, John Knox is furious with James and threatens to tell everyone that he is a Catholic sympathizer. James says royalty is in his veins, something a commoner like Knox will never have.

The search for Darnley continues, his mother urgently wants him to go to Scotland to form an alliance with Mary, but she is told he got a letter from Queen Elizabeth and he has gone to be in England. He has come to her court to bargain, saying he is in love with a woman who is to marry another and as Queen she can stop that. If she does that for him, he will stay in England with the woman he loves and without him Mary will be powerless against her.

Greer visits Mary, who gives her a letter from Gideon. She tells James that John Knox was behind the assassination attempt on Elizabeth, he forged a letter in her handwriting ordering Lola to kill Elizabeth. Lola died believing she was following Mary’s command. Mary says there are still 2 queens and only 1 English throne.

She asks James if he knew and he admits he knew after the fact. She angrily tells him she doesn’t need to prove anything to him as she is his queen and he chose to serve the Protestant agenda. She tells him he has a long road before she can trust him again. She says she is going to marry Darnley to have power and the Catholics behind her. She needs a husband that all the Catholics will stand behind and that is Lord Darnley.