BY Sarah Luoma on May 25, 2017 | Comments: Leave Comments
Related : Uncategorized 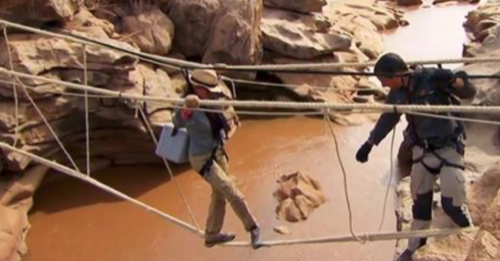 Tonight on NBC their new show Running With Bear Grylls airs with an all new Monday, May 25, season 3 episode 9 called, “Julia Roberts” and we’ve got your Running wild with Bear Grylls recap down below. On tonight’s episode as per the NBC synopsis, “Julia Roberts joins Bear on a special desert mission delivering life-saving vaccines to a remote village in Kenya. On their way there, they jump from a moving plane, navigate through dense underbrush and cross a river full of crocodiles and hippos.”

Julia is on her way to Wamba, Kenya to get vaccines to bring to a remote village. Meanwhile, Bear is getting in a helicopter to make his way there. Julia plays with children at a small clinic while the nurse gets everything ready. Julia is given vaccines in a cooler. She must get them to the village, keeping them cool. Julia heads to the Wamba airport to meet Bear. She knows he will make a grand entrance. He shows up in a small jet plane and helps her get on as the wind whips around them. There is live stock on the plane. She laughs the entire time in between gasps and screams as they take off.

They make a bumpy landing. Bear tells her to hold tight. They get out and walk a bit to find Bear’s land rover that is a bit beat. The engine grinds and wont turn over for a few seconds. But Bear gets it going. They drive, seeing waterbuck on their way. Julia explains that when she was a kid she was an average tomboy.

Bear prepares her for crocodiles up ahead. They get a flat tire. Julia and Bear change the tire and then head west through the hot flat lands. After several miles more they must travel on foot because the terrain becomes dense. They come to a makeshift bridge with crocodiles below. Julia is fearful. She thinks they need to discuss a plan. She hates heights. She is sweating a lot now. Bear goes first. Julia takes deep breaths as she watches.

Julia thinks this is a terrible plan after Bear sees a croc below. She crosses slowly and makes it to the other side. She is still in shock that she just made it. They smell smoke. They make it to the village. They are happy to see Julia with vaccines. After she meets with the family they give her a present – a goat head. They head back out to travel to the next village. They find a place to settle for the night. Julia tells Bear that she wanted to be a veterinarian when she was younger. Her family is all actors so she fell into the business. Her big break was Mystic Pizza. She later took a 2 year break from acting but realized she may have made a mistake. She returned when she was given the role in Pelican Brief.

Bear asks her how she stays grounded. Because of her husband, Julia shares. She finds it an honor to find your partner in life and make a family. Bear cooks the goat head. Julia can’t bring herself to eat it. She would rather eat poop. She tries it and shakes with disgust.

Its night, she hears baboons. She wakes Bear. She tells them that they sound mad. The next morning, they pack up quick as the temperature rises. They finally reach the village. They need to get the vaccine drops in them quickly. Julia begins to administer 2 drops to each child. Bear starts helping too when more and more families show up.