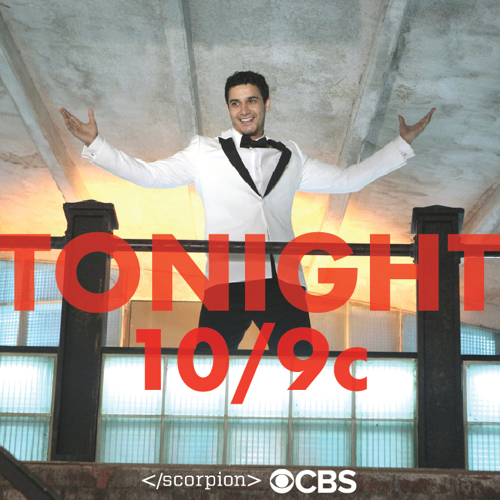 Tonight on CBS their hit drama/comedy Scorpion airs with an all-new Monday, September 25, 2017, season 4 premiere episode and we have your Scorpion recap below!  On tonight’s Scorpion season 4 episode 1 premiere as per the CBS synopsis,  “Season 4 begins with Team Scorpion being forced to work with their old nemesis Mark Collins in order to prevent the extinction of mankind. Meanwhile, Walter and Paige awkwardly navigate their new relationship.”

Paige wakes up and asks Walter how he feels this morning. In his head, Walter is performing a musical number with Paige. Sly cuts in. He has bagels. Walter tells him they have no time. Happy dances in pink. Paige calls him name again. He snaps out of his daydream. His phone rings. He has a phone call from a correction facility.

Sly meets with his dungeon dragons club. They replaced him when they thought he was dead. Happy and Toby are ready to leave on their honeymoon. Walter calls Happy. Collins called.

Cabe and Walter arrive at prison. They visit with Collins in his cell. Collins has been tracking environmental patterns. There is an extinction event on the rise. In 30 days, Collins says half of humankind will be gone. Collins wants in on the case. Cabe tells him no way. Walter tells Cabe they need him.

Cabe reports to his higher up. He needs to take Collins on a field trip. His boss tells him his butt is on the line. Walter and the gang meet up. Happy is nervous Collins will try to kill Toby again. They are only half moved in!
Collins arrives to reunite with the team. It is a very cold reunion. Happy reminds him that they aren’t his friends. Cabe juices him. Collins disrespected Paige.

They all get in the car. They fight because they are sitting so close. Walter yells at all of them. At the warehouse, the team goes over what they will need.

They are in the car in Norway riding around trying to find the methane leak. Collins locates the area. They all get out of the car. Collins starts to run. He is shocked by Cabe and drops. He was trying to alert the team to their leaking chemicals. Paige asks Walter to speak for a minute. She was wondering why he didn’t consult with her about Collins joining the team for this case. She is after all the Scorpion whisperer. He informs her that he is the founder of the team so therefore he has the ultimate say. Paige doesn’t like his answer.

The team gets to work trying to drill for the chemicals they need now that they spilled their own. Happy and Sly drop down in a whole to drill. Sly isn’t himself. Happy wants to know why. He explains about reading his own obituary after his club thought he was dead. It was pathetic.

Meanwhile, Collins, Walter, Cabe and Toby go on the hunt for more supplies. Collins pulls Walter aside. He saw him and Paige fighting. He warns him. They are two very different people.

Sly starts talking nonsense to Happy. She realizes he is high from the gases. She yells to Paige to pull them up. On the radio, Toby hears and freaks out. Collins bumps him into a whole in the ice.

Toby is trapped underwater. They try to locate him. Walter starts hacking at the ice with a pick axe. They see him. Cabe opens up a whole. Collin dips in and grabs him. They pull him out. Meanwhile, Paige is pulling Sly and Happy up by ropes with the help of the truck. Sly realizes he lost his wedding band and freaks out. Sly jumps up and runs to the truck he begs Paige to lower him back down. When Happy doesn’t come up he runs to the ledge. She tried to get the ring but it slipped off.

In the truck, Toby thanks Collins. He tells Toby he is a new man. Walter loads up the bacteria. They leave to head back to the others. Toby hugs Happy. Collins gets out of the truck. Happy lunges at him. They all vouch for Collins. It was a mistake.

They get to work. Walter asks Paige for help. She doesn’t help him. She is still mad. Paige walks away. Collins catches up with her. He congratulates her on Walter. He has changed a lot. Their conversation comes to an end when they are all rocked by aftershock. A piece of equipment goes up in the air and comes down, almost chopping off Toby’s manhood. His eyes go wide!

A methane pocket has caused an explosion. Walter thinks they need to harness the fire to melt ice into water down into the leak of the methane leak. They need to use the truck for assistance. They elect Cabe. Sly tells him he needs to go 45mph to get the job done right without blowing them all up.

During their experiment, the truck lunges down into the cave with Collins in it. Toby cannot believe they need to save him. Cabe must jump down into the back. He pulls Collins out and saves his life. Cabe touches base with his headquarters. They are headed out to pick up Cabe and Collins. The team will finish up here. Collins tells them all he has changed. Even if they don’t believe him, he cares about them. He says his goodbyes.

Walter and Paige make up after discussing how different they are from one another. Walter has another musical moment. But this time he is actually acting it out. They all stare at him. They are all feeling lightheaded. Happy takes a look around. It’s the methane in the air. They didn’t fix the problem!
To Be Continued…..