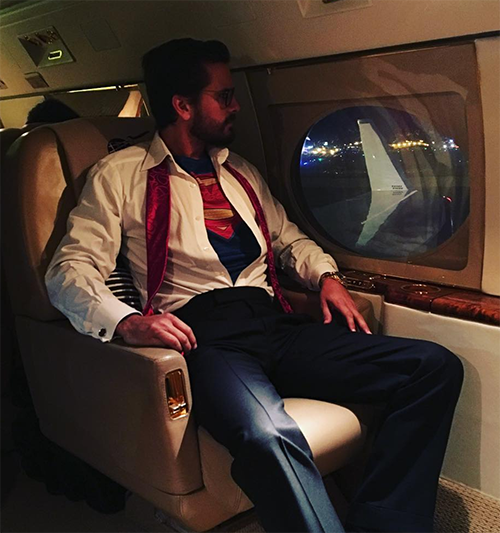 It looks as though things have gotten quite nasty between Scott Disick and the rest of the Kardashian family. In fact, there’s a new report that said Scott allegedly had a major blow out with Kris Jenner and Kim Kardashian during their family vacation in Costa Rica last week. Apparently, that’s why Scott abruptly left Kourtney Kardashian and their children behind and jetted off to be with his new model girlfriend in Miami instead.

Insiders say that Kris Jenner and Kim Kardashian were both livid when they found out that Scott secretly flew in a mystery woman to be with him in Costa Rica. Scott was trying to keep her away from the rest of the Kardashians, but a ‘Keeping Up With The Kardashians’ crewmember ratted him out to Kris.

Both Kris and Kim confronted Scott over the girl and the three of them got into a big blowout fight. They blamed Scott for being disrespectful to Kourtney, even though the two have been broken up for sometime now. In fact, he was only there to help Kourtney co-parent their three young kids, Mason, Penelope and Reign. Eyewitnesses say that Scott immediately bolted back to Miami right after the fight.

Of course, no one really knows what happened behind closed doors between Scott Disick and the rest of the Kardashians. Scott made it clear that he won’t be running back to be with the Kardashians anytime soon. He was spotted getting very hot and heavy with model J Lynne at a Miami hotel this past weekend.

If that weren’t enough, he was also getting very up close and personal with a number of different models during his stay at the Setai Hotel. If Scott is looking to send a message to Kourtney and her family, he is certainly doing it with the help of his new girlfriends.

Tell us, do you think Scott will be able to reconcile with Kourtney and the rest of the Kardashians? So far Scott has not made any public comments about the fight or his relationship status with Kourtney for that matter. Yet some fans believe this might blow over, too. After all, Scott and Kourtney have been on-again and off-again for many years. Drop us a line with your thoughts in our comments section below. Also, check back with CDL for all the latest news and updates on Scott Disick right here!