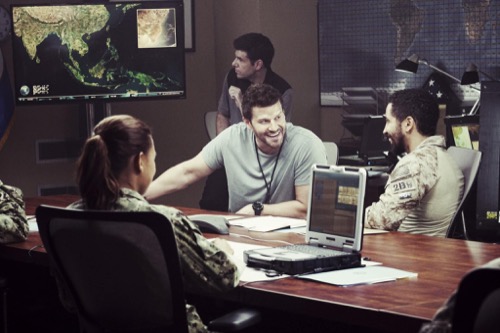 Tonight on CBS their new military drama Seal Team airs with an all new Wednesday, October 11th, 2017 episode and we have your Seal Team recap below.  On tonight’s Seal Team season 1 episode 3,“Boarding Party,” as per the CBS synopsis, “Jason and the SEAL team must rescue a group of researchers being held hostage on a ship in the South China Sea. Meanwhile, Clay is ranked in the bottom five of his class, jeopardizing his future as a SEAL.”

So make sure to come back to this spot between 9PM and 10PM ET for our Seal Team recap.  While you wait for our recap make sure to check out all our television news, spoilers, photos, recaps and more, right here!

Julia (Kelsey Slepser) is gathering samples from the ocean when Vince (Shaan Sharma), teases her about procedure, she says she almost doesn’t like him but he reminds her she is marrying him. Suddenly gunfire erupts, she hides her knife in her boot and raises her hands as a gunman enters the tent.

Jason Hayes (David Boreanaz) comes to his house and tells Emma (Kerri Medders0) that clearly her generation has a different definition of “begin ready”, as she stands in front of him with a towel on her head and brushing her teeth. He tells her to rush and goes into the kitchen where his estranged wife, Alana (Michaela McManus) is standing. They banter, then she confronts him about discovering Nate’s (Daniel Gillies) burner phone in his tool box; and when she asks him if he was having an affair on Molly, he doesn’t answer. Alana confirms she has no intention of talking to Molly about it.

Jason and Ray (Neil Brown Jr.) watch as the trainees at the Naval Combat Training Center run the course; he is complaining about Clay Spenser (Max Thieriot) pushing his team too hard but Ray thinks it’s more about Jason’s ego because Spenser is beating his record. When they are done the run, Adam (Michael Irby) tells him his team is only as good as their slowest guy.

Meanwhile, Mandy Ellis (Jessica Pare) calls in the Seal Team, let’s them hear the recording of a US research vessel being hijacked in the South China Sea. She reveals who was on the ship and Mandy introduces the team to her South East Asia expert Sam Roberts (Johnathan McClain), the top analysis on piracy of the area. Jason is angry that they are waiting on a green light to go, because of the war on terror.
Clay sits at the bar with Brian (Jay Hayden), who is struggling with being in the bottom 5 of the crew. Brian says he is better than this and he is good but the guys only listed him because of the attitude he has had since he the moment he got there. Brian said the whole time they were in Team 3, Clay was the only guy he was 100% certain would be Tier 1 operator and he wants to know what happened to THAT guy.

Stella walks over to sit with Clay, saying she is tired of waiting for him to call her and jokes that he really isn’t Dog the Bounty Hunter. She wants to know if she is a color or a number; he is surprised she is familiar with “frog hogs” and wants to know why she would hang out here. He says he knows what she is, calling her a “tourist”, someone looking for an adventure before she settles down in her ivory tower kind of life. She is offended and says he didn’t disappoint her, just stopped surprising her and she walks away.

Sonny (A.J. Buckley) and Davis (Toni Trucks) bicker as they work with the model of the ship, trying to figure out where the hostages are. Sonny is not a fan of swimming, but it’s their only way to get in’; with two assault teams with sniper over-watch. Davis knows exactly what to prep.

As they walk, Jason asks Ray about the NSA surveillance thing he did last year, wondering about tracking phones. Jason admits that Alana found a burner phone and assumes it’s a “hoe-phone” but Ray jokes that maybe he was a talking to a reporter like “Deep Throat” style. Ray wants Jason to reunite with his wife, Alana but sniffing through Nate’s phone is not going to get him back there.

Jason and Ray go to the church where Molly donated Nate’s car. Nancy (Tia Cosey) gives them the keys; when they sit in the car, Ray gives Jason the times and dates of the calls and they discover Nate was in Norfolk at that time; both curious to know what is there, as it is the same address too.

Mandy is concerned that the ship suddenly disappeared off of radar, and the GPS was just turned off. Jason and Ray get the call and race off to the base where Mandy informs them that by the time they get to the area, the ship could be anywhere in an area the size of the continental United States.

On the plane, Mandy says they need to figure out where they’re going. Its Typhoon season that intensifies the current. Lt. Commander Blackbunr (Judd Lormond) says he is confident enough to turn off his GPS. Mandy figures out that with the currents, they are most likely close to the Philippines and quickly makes a call.

Back at training, Clay dives on a grenade to save his team member. Adam says that’s some real Chuck Norris action and would make a great chapter in his book but like his daddy he would be too dead to write one. Clay says he was only thinking of saving a hostage and his team mate. Adam says his mission was to get the hostage to safety and not go medal jumping; he is told to make sure the grenade goes high and they go low.

Mandy tells the Seal team that her source says they are headed to Gilligan City where they are meeting someone to buy the hostages. The buyer is Eduardo Mercado (Lloyd Barachina), also believed for the bombing of a ferry last month that killed 70 people. He wants to buy his way to the world stage and the cheap way is to buy American hostages and chop their heads off live on the internet. Ray reminds everyone what they will be doing, all of them are bugging Sonny about the waters being shark ravaged waters.

Ray tells Jason they don’t have the right to be poking around in Nate’s life like this and encourages him to tell Alana that the phone was a dead end; he wants to know what telling her is going to solve.

At Clark Air Base, Davis tells Mandy figuring out where they are, was smart. They have eyes on the ship when 3 vehicles arrive and a dozen people emerge; they attempt to call off the recon but the team is underwater and communication won’t work until they surface.
As they reach the boat, Jason shakes his head when he sees the men on the ship. They wait until nightfall and Jason tells Sonny they need to do this quick and dirty. Ray climbs the later and kills one of the men, finally the communication kicks in and they learn they have 12 hostiles and that the hostages are being rounded up for transport. Alpha team is told to stand by while Bravo goes below decks.

Alpha team goes to the bridge when Jason tells them the Bravo team is making entry. When Alpha reaches the bridge they hear a call out for backup because they are under attack; another crew is heading in and they have 4 minutes. 11 hostages are secured while they are in pursuit of the last 2. Mandy tells them they have to expel the hostages immediately as they only have 2 minutes to get them out. Jason gives Ray that dreaded look, saying that’s not the only way in the room.

Sonny and Ray are preparing for Jason to breech the room from the outside; he tells Ray to buy some time as the ones approaching are not friendly. Jason repels down the side of the ship, stabilizes his shoes and shoots the gunman in the head, they managed to rescue Vince as a firefight ensues. All the hostages are on a boat and they manage to escape, one of the American ships arrive and use automatic weapons and destroy the men on the pier.

Spenser returns to the gym where he sees Brian and apologizes for being a dick as Brian says he was being real preachy. Clay says there is something about the selection process that make him reevaluate his life because now he is faced with the possibility of not being about to do what he dreamed of doing his entire life. Brian reminds him that is a lot of weight to put on himself. Brian tells Clay he may own Stella an apology too and she would be good for him and all of them because she might be the only who can keep his ego in check.
Davis runs into Mandy in the hallway, but she declines to join them for a drink. Mandy says it’s not that she doesn’t want to hang out, it’s her role there that makes it complicated; Davis agrees that it’s better to stay on the outside. Mandy keeps her distance because she has to, not because she wants to.

Clay meets with Stella as they walk up to her place. He hands her a book, saying she is one hell of a writer. She says this is pretty good for an apology and she would give him a B+. He says he should hit the road and she says he should come in for a minute. She smiles at the flowers on her table as he says Seals prepare for all scenarios. She finds it hot that he used his ninja skills to get in there. They end up in her room, ripping each others clothes off.

Jason sits outside the address on Nate’s phone, watches a woman leave the address. She walks directly past his truck and he takes a photo.