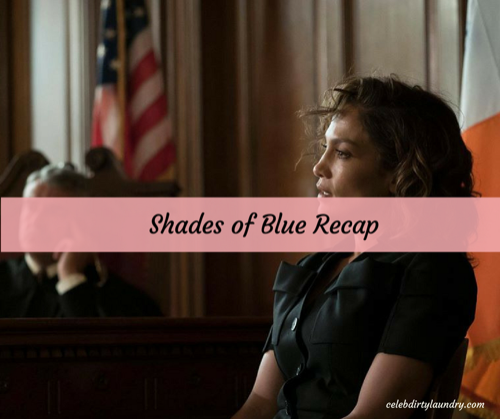 Shades of Blue airs on NBC tonight with an all new Sunday, March 12, season 2 episode 2 called, “Eye of the Hurricane,” and we have your weekly Shades Of Blue recap below. On tonight’s Shades of Blue season 2 episode 2 as per the ABC synopsis, “Wozniak (Ray Liotta) launches an all-out war against Stahl after learning that his target is Wozniak’s close friend Julia Ayers, who’s running for mayor. In other events, Harlee (Jennifer Lopez) pursues a case that makes her a target of Wozniak and the FBI; and a new presence at the precinct threatens to uncover the crew’s deepest secrets.”

Woz had called Harlee out of the blue one night and her to meet him at the dinner. But Woz hadn’t been clear with Harless because she showed up at the dinner believing he was finally going to forgive her and instead he said he needed a translator. Woz had a meeting with Stahl and he claimed he needed Harlee to translate “rat” for him. So Harlee could have gotten upset however she stayed at the table and didn’t leave even when Stahl implied that she should. And so Harlee eventually started to act like a translator.

She told Stahl that the reason Woz wasn’t returning any of his calls was because Woz was never going to turn on one of his own. But Stahl reminded them both that he still had everything he needed to put Woz in jail and that principles didn’t really matter. So Harlee had tried to tell Stahl that they had already framed a member of the mob for him and that it was the extent of what they could do yet Stahl still demanded more from them and there was nothing they could do other than ignore him or wait till he sent them to jail.

But Harlee had gone to court the next morning like nothing was wrong because she had to testify in that mobster’s hearing and so she had to deal with the repercussions of what she did. She had framed someone that was rich and power though she forgot to mention that to the ADA she was sleeping with and so she hadn’t told him why she had been spooked when the hearing totally collapsed right in front of their eyes when a judge clearly on the take decided to throw the case out of court.

The judge had said that there was little evidence and that the cops had made a bad arrest. But they were framing someone and therefore went out of their way to make the evidence seem credible. So Judge Foweler had no grounds to stand on and he had rightfully looked away ashamed when they saw him after court, but the mobster had waylaid Harlee in the elevator and he had a few things to ask her. Like who told her about his meeting that night? So Harlee had tried to say that it was an anonymous tip and he told her that she should be careful where she parked her car.

So Harlee became interested in the judge because she wanted to find some dirt on him and she found out that he had gotten arrested for a DUI upstate though the case had surprisingly been dismissed before it could affect the judge’s reputation. But Woz had told Harlee to back off. He said that things with Bianchi would be fine and that she shouldn’t be looking into the judge even if there was something there because everyone was corrupt. There were corrupt police and corrupt judges so Woz didn’t want make a fuss over just one.

Only Woz was also dealing with the blowback from Stahl that was making him testy. Stahl had frozen all of Woz’s accounts and that locked out Woz as well as his wife. But Woz had found a way to get revenge. He had given the recording he had made of Stahl and the prostitute to Stahl’s ex and thereby the custody case that Stahl was fighting much harder. So it was tit for tat with them and both firm believers in the scorched earth policy though it wasn’t doing either of them any favors and just made Woz’s life worse.

Woz later got into it with his wife Linda. She had found out that her husband had been cheating on her with men and she had wanted answers. Linda had wanted to know who was the first and what had felt for Donnie because Stahl had given her a recording of her husband with his lover. But Stahl had also made Harlee a visit. He told her that he was going to go after her like never before because of what she and Woz had costed him. So, in other words, things hadn’t worked in his favor during the custody hearing and now Stahl wanted blood from everyone.

So Stahl had made some threats and he had admitted that he had been obsessed with Harlee, but he told her very clearing that there was nothing stopping him and he hadn’t cared about what she had found out about Julia Ayres. But what Harlee found could have been important to him. She had found out that Julia had gotten to the judge and that she most likely got rid of the judge’s arrest record during Hurricane Sandy because that’s when everything became crazy and no one was paying attention to what was going on.

But Stahl who had been wrapped up in what was going on in his own life, had walked out of Harlee’s apartment vowing retaliation and had run right into Woz. So Woz attacked Stahl for hurting his marriage and he would have killed him if Harlee had threatened him to stand down yet Woz said that there was no going back because his life was ruined. And with Tess taking money on the side without his permission and another detectives looking into his unit – Woz just might be right when he said his life was ruined.