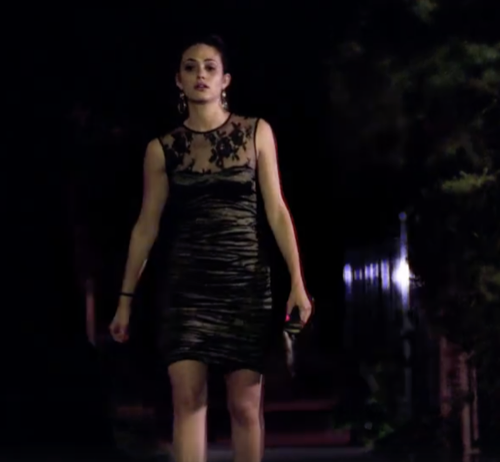 Tonight on Showtime the uniquely twisted and highly entertaining show Shameless returns with an all-new Sunday, November 5, season 8 episode 1 Premiere called, “We Become What We … Frank!” and we have your weekly Shameless recap below. On tonight’s Shameless episode, as per the Showtime synopsis, “The Gallaghers find themselves with money to burn as Carl sells their inheritance from Monica. Meanwhile, Fiona swears off random hookups to focus on her new apartment building; Lip deals with the sacrifice that comes with sobriety; and Frank emerges out of a meth-induced haze to make amends for decades of depravity. Season 8 premiere.”

Tonight’s Shameless season 8 episode 1 Premiere is going to be great, and you won’t want to miss it. So be sure to bookmark this page and tune in for our coverage of Shameless tonight between 9 PM – 10 PM ET! While you wait for our recap, make sure to check out all our Shameless spoilers, recap, news & more, right here!

Carl Gallagher (Ethan Cutkosky) turns off his alarm as Lip (Jeremy Allen White) asks him what time it is; Carl says he is staying on military time so be doesn’t get soft over the summer. Fiona is just coming home as Lip comes outside for a cigarette, she says she is turning over a new leaf and closing her tinder account, now wanting connection and shared interest. Lip says he woke up wanting a drink so he chose to run to work instead.

Inside, Carl is making breakfast for Liam (Christian Isaiah), when Fiona joins them in the kitchen. Ian (Cameron Monaghan) comes into the kitchen as they discuss how Carl is distributing the meth that was left in a box in their deceased mother’s storage locker; they all call it their “Monica money.”

Suddenly, in a Shaolin temple, Frank Gallagher (William H. Macy) is chanting and focusing on a photo of his beloved wife, Monica (Annabelle Apsion). He has the meth with him as he smokes a crack rock of it in the temple.

Debbie (Emma Kenney) arrives at work with her baby and an animal crate. She quickly puts the baby in it as her co-worker, Berta leaves for the day. Fiona drops Liam off at school, where she is chastised for allowing him to ride in the front seat. Lip is at work, fixing a motorcycle at the shop, he learns from Brad (Scott Michael Campbell) that Eddie (Levy Tran) beat up a bouncer at a bar.

At her restaurant, Fiona admits to Veronica (Shanola Hampton) that she is done with tinder and meaningless relationships. Veronica misses intimacy with Kevin (Steve Howey) and jokes about running over Svetlana (Isidora Goreshter) with Kevin’s truck; and is willing to do 4 years to kill her. Fiona tells her it is enough with her Svetlana killing fantasies.

Ian and Sue (Alicia Coppola) are riding their ambulance, where she agrees to go to the shelter until they get a call. Frank is outside the temple, just raising his arms to the sky. Meanwhile, Fiona goes to the new building she bought and meets one of the tenants, Nessa. Fiona admits she hasn’t met any of the tenants and Nessa gives her the down low on everyone living there as Fiona jokes about getting her deposit back. She confirms she plans on renting the apartment she is fixing; Fiona suddenly tells her she isn’t gay while Nessa says she isn’t her type, she likes blond and bitchy. Mel, her girlfriend, walks in and makes her point obvious.

Liam is told to go outside and have fun, he isn’t pleased to have to play among the kindergarteners; but it quickly becomes obvious they are using the fact that he is African American to bring in new students.

Ian hands out condoms, joking that he shoplifts them but Trevor says that isn’t true as Sue explains Ian will go broke buying them for everyone on the South Side. Ian learns that Trevor is going out on a date, dinner and a movie and Ian isn’t included; they get a call and are off.

At the parking booth, a man cannot find his ticket and threatens Debbie; she says if he do get out of his truck she will have to tase him and glue his eye lids shut until the police came. Back in school, Liam continues to be the focus of the “diversity” of his academic school, and constantly in the playground.

Frank returns to the house, with cuts and burns all over his body. He talks to Carl, telling him he smoked half his meth and gave the other half to the needy when he asks if he could sell it for him. He pulls out one of his molars and says the meth has nasty side effects though; just then a truck arrives with the hot tub Carl bought with his mother’s inheritance and Frank says she would have loved it.

Fiona talks to Veronica about the apartment in her building. Kevin comes into the restaurant, saying they can’t sue Svetlana because Russians always win; they are desperate to get ownership of the bar back. Both Veronica and Kevin feel Fiona won’t get that much for the apartment.

Poor Liam is called outside of his class again, to be used as a puppet to promote the school but before he leaves his art class you can see he drew a house, with 5 dead people and red paint smeared on them. Lip, Brad and a couple buddies join him at a diner to eat. Fiona is talking to Veronica still about the apartment when suddenly ICE shows up and she tells everyone it is not a drill and people scatter, as they round up some of her staff.

Carl talks to his dad, who says he is thinking about making amends to people he harmed while under his wife’s intoxicating spell. He takes Carl by the shoulders and apologizes, says he made a list and is off to start, Veronica walks into the bar that she owns with her husband Kevin; Svetlana is behind the bar and Veronica wants her to do the right thing but she calls her and Kevin stupid people. Veronica punches her in the face, removes her earrings and takes her down; one of the patrons asks if he should stop him and he says not until the clothes come off.

Frank goes to someone’s house to apologize for robbing her but it wasn’t her. Debbie returns home, hands her fiance, Neil the baby, tells him what to feed her and rushes off to school. Frank continues on his apology tour; only making himself worse for admitting things he did that others didn’t remember nor knew what he did. Meanwhile, Debbie says its time for her to stop focusing on what people did to her in the past because she is woman and she is strong. She is determined to do her welding and do it well.

Sierra (Ruby Modine) can’t watch Lucas because she has a date with Charlie. Lip offers to babysit, but is shocked because he thought she had given up on him. She says he is Lucas’ father and she felt like giving him another chance.

Kevin is working at a gay strip club as Debbie is out with the people from work. A guy named Duran comes over, saying he works at a beauty salon and wants to cut a piece of her hair off but before anything can happen, one goes outside and chases an uBer car because he used to be a taxi driver before uBer wiped them out.

The brothers all sit together in the hottub, Carl just gave Lip his “Monica” money. Liam tells them that some “crack told him his life mattered!” Frank rushes over, saying he smoked all his meth, got over their mother and is a new man, making amends to everyone; asking if he could make amends to them tomorrow. Frank asks to join them. He gets butt naked and jumps in with them.

Kevin allows a man to get near him, and he can get near him, but not touch it, as per his wife’s request. He touches Kevin’s chest and tells him he feels a lump, saying he can refer him to an oncologist.

Fiona and her brothers are eating breakfast; she tells Liam she will drop him off at school. Frank comes down saying he is off to continue with his amends, he grabs Fiona, telling her she is beautiful and he is sorry for any harm he has done to her through the years. He says he is off to try to learn to be a grown up. Ian says he smoked a pound of meth, and it could be brain damage but too early to tell.

Lip comes in to pay Sierra’s utility bill, that she was on the phone with, worried it was getting shut off. Fiona is asking $850 for the new apartment, Nessa say it is a bit high but she promises she can put the extra back into the building. Several potential tenants come in and a bidding war begins, as Nessa smiles at her.

Homeland Security arrives and Veronica learns Russians are not a priority until she tells them they are involved in human trafficking and prostitution. He tells them to load up quickly as they have Russian prostitutes. Kevin is at the onologist, while Debbie unloads her welding gear. ICE arrives and invades the bar as Russians attempt to scramble. Veronica points to Svetlana saying she is the leader.

Ian is with Trevor, he apologizes and suggests buying him a used car. He reveals he is doing okay but misses his mother. He again asks Trevor for one drink, but he says he has to go; Ian says he will come back again tomorrow. Kevin has a 4 cm mass in his right breast and they need to do a biopsy immediately. Frank goes to the cemetery, going from one grave stone to the next with apologies.

Nessa and Fiona sit outside the apartment smoking a joint. Fiona shows her a dick pic from the guy from the other night and Nessa is grossed out that she lets those things near her. Fiona says they are better when you’re drunk. Nessa’s girlfriend calls for her to go inside, instead of hitting on their new landlady all night.

Lip knocks on Professor Youens (Alan Rosenberg) door to pay him back, thanking him for the rehab and takes off running again.

Carl has the alarm going off, raises the American Flag and says “America First, F***kers!”