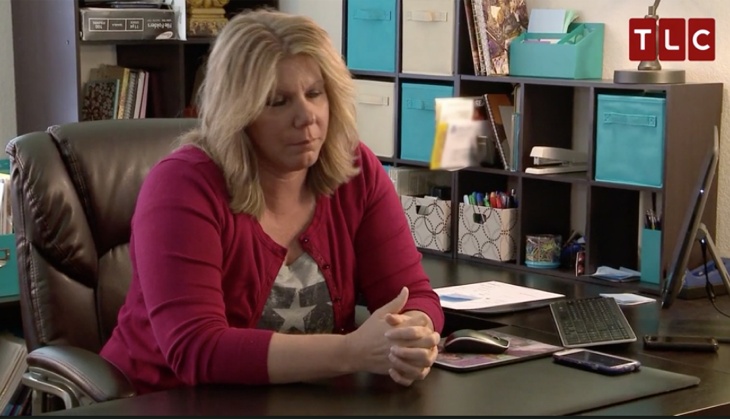 TLC’s reality show about a polygamist family Sister Wives returns tonight with an all-new Sunday, January 8, 2017, season 7 episode 6 called “A Shocking Revelation” and we have your weekly Sister Wives recap below. On tonight’s Sister Wives season 7 episode 6 as per the TLC synopsis, “Meri’s only daughter Mariah makes a stunning announcement. Then the whole family heads to a mountain resort where Meri struggles to connect with Mariah, who is still angry about the recent catfishing.”

Mariah had dropped a bombshell on everyone. They had all thought that she wanted to tell them that she was dating someone serious or even considering marriage however no one had expected that Mariah would tell them that she was gay. But she hadn’t been joking and more than anything she had wanted her family to accept the fact she was gay. So that’s what she received. The family had gathered around Mariah in support and she had been listened to as she explained how hard it had been to come forward with her own truth. And so some members of the family did see where Mariah was coming from.

Robyn had said that it had been hard for her and for everyone in the family coming forward as a plural family. So Robyn knew that Mariah owning her truth was more important than what they may have been taught in church or even doctrine and she as well Janelle just accepted their daughter immediately yet Meri and Kody on the other hand had needed to time to process Mariah’s news. Kody had admitted to himself that he was facing one of his hypocrisies when Mariah told him she was gay. However, Kody what had helped Kody to terms with everything had been the fact that he had once thought of the possibility.

Kody had thought about the possibility of one of his children being gay some years ago. Yet, he had told himself that he never wanted one of his children to feel unloved because that was duty as a father and so that had given him the push to reassure Mariah that he was going to love her for the rest of their lives. So Kody’s acceptance had come a little easier to him when he said it was his job to love and god’s job to judge though he later had to help Meri get to a place where she accepts Mariah’s sexuality because Meri hadn’t reached the place he had. Meri had simply gotten upset because she wondered why she didn’t know or at least suspect this about her own daughter.

Meri had always assumed that her daughter was straight and that she would have a son one day when Mariah married a nice young man. Though adjusting to something different and that she had gotten it so wrong about Mariah had been hard for Meri. So Meri had asked for Kody and Robyn to come over and she had told them what she had been struggling with, but one of the things that she had been told was what she shouldn’t bring her confusing emotions to Mariah. Meri’s thought were all over the place because she didn’t fully understood her own feelings much less what Mariah was going through and so both Kody and Robyn had wanted Meri to think about something before she possibly hurt her relationship with Mariah even further.

But Meri later chose the family vacation as the best time to talk to Mariah. The family had gone to a Mountain Resort and the place had been a beautiful as well as familiar. The resort had looked like a giant house and it had made everyone feel like they were living all together again. So the vacation had helped some lower their guard however Meri knew she had to be careful with what she said to Mariah and so that made her even more self-conscious. Meri had found Mariah by herself so she knew that was the best time and she had made sure to ask Mariah a very important question to start with. Would you mind if we talked?

Meri had asked that because she wanted Mariah to feel comfortable around her and Mariah had wanted to give her mom a say. However, Meri hadn’t truly grasped the advice she had been given and so that same awkwardness she had before had come out with Mariah. Meri had wanted to know Mariah’s process on how she knew and then she had felt slightly upset that Mariah had said the process was personal. So Meri had tried being honest and saying that she doesn’t know how to correctly put her feelings yet she made a mistake when she said it was weird. Meri had been saying that her feeling were weird and unfortunately that got long because of the context.

Mariah had felt that her mother was saying her marrying a woman was weird and so things had gotten worse after that. Meri had tried to say that she knew she could still help Mariah plan a wedding and that Mariah could still have children though what she had said and the constant nervous laughter ended up destroying what little headway she had with Mariah. Yet, the worst thing that Meri had done had been the fact she brought up their estrangement. Meri had wanted Mariah to let her into her life and Mariah wasn’t there yet. She could one day be and she hadn’t liked snapping at her mother. And so Meri didn’t have a trust about when or where.

Meri has to accept that Mariah needs her space and that Mariah wasn’t going to share every little thing with her. Though sadly that’s what Meri wanted. Meri had wanted that mother-daughter relationship where they shared things and were each other best friends, but Mariah had liked her independence and had said being away from everyone was how she was able to figure things out for herself. So Meri was still in the exact same position with her daughter and things weren’t going to get better until Meri let go some of that control she wanted to have. And so both Meri and Mariah had just tried to enjoy their vacation afterward.

Someone had come up with the idea to play wedding and so Solomon married his mother Robyn for one hour. Which was cute and it was just something nice for the family to do. But one thing everyone regretted was putting Tony and Gabe on the stove. The guys had been in the kitchen with Christine and Mykelti and it had been their job to plan lunch however the guys had made a crticial mistake when they went near a stove. The mistake had been that they went near a stove. The two hadn’t known how to turn it on or that a cook sheet shouldn’t be on it once they turned it on. So they had been a spark, a boom, and then some laughter once everyone in the kitchen realized the guys hadn’t burned the place down.

So Christine did get an insight the that she wanted into Tony and Mykelti. Christine had wanted to make sure that her daughter was making the right decision and wasn’t rushing into things like she normal does. However, she was finally able to feel comfortable once she saw how well the young couple complimented each other. Tony could be just as crazy as Mykelti and seemed to love Mykelti’s crazier side more than Christine could imagine. And so it wasn’t hard for Christine to give her blessing because she had gotten what she wanted for ant of her daughters. She had gotten a future son-in-law that loved her daughter exactly as she was. So that sort of made up for Tony creating a kitchen fire.

Yet, Christine would have preferred it if Mykelti and Tony didn’t get too handsy or bait her. The young couple had liked to play tricks and they goaded each other though Christine hadn’t known that the couple were messing around with each other when her daughter told her that Tony liked her hair to be down because that had made everyone believe that Tony could only get Mykelti to change her mind about her hair. So Robyn had had to step in and tell everyone that something more was going on. Robyn had said that Mykelti was too strong will to listen to anyone unless she wanted and so she reassured them that Mykelti was the one that eventually would make her own decisions. And one of Mykelti’s first decision had been to announce that Tony would make out with her if her hair was down.

Which is something Mykelti’s said as a way of goading Tony. So Mykelti is still Mykelti and there was no changing her, but later Mykelti showed a little more tact when the older siblings went out to dinner and everyone had had questions for Mariah. Mariah had known that coming out would come up in the conversation so she wasn’t offended that anyone had questions like if she felt a weight had been lifted now. But everyone had respected what it took for Mariah to tell them that she was gay and no one had a problem with it. They had loved Mariah like they’ve always loved her and so Mariah felt more comfortable about opening up to her siblings about when she knew. And her brother Logan was the first person she told she was gay.

Meri however had wanted to be that person. Meri and Robyn had talked about the wall she felt was coming between her and her daughter. But Meri had listened to Robyn when the other woman had said that she needed to let Mariah come to her and so Meri hadn’t gone back to Mariah with her questions. Meri simply sat back even as the other kids wanted to hang out with their mother and it’s good that she’s finally taking Robyn’s advice. Robyn had felt that a child shouldn’t have to help their mother understand her own feelings and that had been true. So Meri shouldn’t have gone to her daughter and try to make what Mariah was going through about herself or why she doesn’t have the relationship she wanted with Mariah.