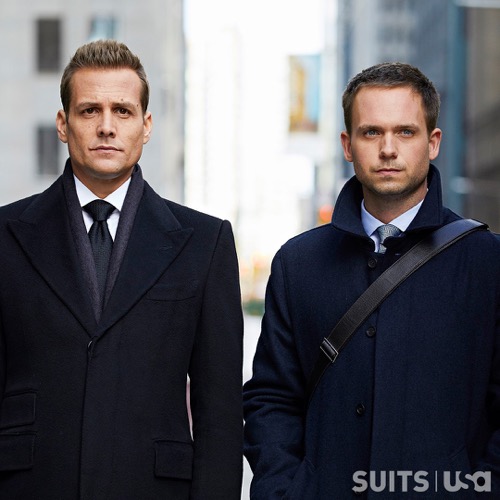 Tonight on the USA Network their critically acclaimed drama, Suits returns with an all-new Wednesday,  September 13, 2017, premiere episode and we have your Suits recap below. On tonight’s Suits season 7 episode 10 Fall Finale called, “Donna,” as per the USA Network synopsis, “Mike and Harvey’s power move is countered, putting their backs up against the ropes. Rachel fears her father’s judgment is clouded by the past. Louis aids Alex when his client comes under fire.”

Harvey is trying on his 3rd tie. Paula takes notice. She asks him if he is all right. Is it because the attorney general is going after Donna? Paula is not threatened that he cares about Donna. She is proud he is so loyal and caring for those in is life. She tells him good luck.

Harvey talks to Alex when he gets in the office. Alex looks concerned. Gould is after them. They took care of Bratton, but now the other partner is threatening them. Harvey doesn’t have time to deal with them. He tells Alex to go get them.

Robert talks to his sister Jasmine in the yard. He tells her to get transferred, leave quietly and things will be all right. Rachel comes in, breaking Robert from his day dream. She wants to talk about the case.

Back at the firm, Louis comes in to tell Donna that she won’t have to get up on the stand. Harvey comes in. He wants to know what the hold-up is. Louis tells them both that because Donna worked with Harvey at the DA’s office so she is protected, her testimony is privileged. Harvey calls him a genius.

Harvey tells Mike the news about Donna, Mike wants to know if this is a good idea. He knows how Harvey acts when it involves people he really cares about.

Alex visits Gould. He is sick of him pouching his clients. He serves him a law suit from his client.

At court, Donna is called to the stand. Mike informs them she won’t be speaking because her testimony is privileged. Meanwhile, Robert and Rachel fight their case, winning over the judge. Mr. Kittredge must submit to a deposition. Donna is called to the stand after the judge rules against Mike. She admits to destroying documents. Her cross examination gets heated when she is accused of doing distasteful acts in order to become the COO. The judge rules that the case will move forward and the missing memo will be admitted. Harvey is angry while Donna tears up on the stand.

Jasmine wants Robert to take her case. He doesn’t want to take the case because it will ruin his career. She is angry and walks out of the kitchen.

Harvey and Mike discuss court. Harvey wants to find the person the memo was given to.

Alex tells Louis about Gould and his threats. Louis tells Alex to take all of the associates he needs because they are family.

Harvey and Mike visit a reporter who wrote the story about their client and the memo she received. They want the reporter’s source. He isn’t willing to give up any information.

Rachel informs Robert that she reached out for a settlement. She doesn’t think they can win. Robert gets mad. He isn’t backing down this time. Rachel agrees that they can keep fighting even though she fears for Robert’s mental state.

Louis comes in to see Donna. She is angry, angry that Louis didn’t help her. He left her high and dry.

Louis is telling his therapist that he is upset about Donna laying into him. He gave them a fool proof plan. Maybe Louis is upset because he is confusing this situation for the one he is experiencing with Sheila. Louis storms out.

Donna comes in the office to tell Mike and Harvey that she thinks Holly Cromwell is the source, the person who told the reporter.

Alex tells Louis that he has pulled out all the stops and he is having trouble against Gould. Louis starts thinking about how to beat them. He wants to play a bluff. Alex isn’t a fan of this idea.

Donna finds Holly. She needs her help. Holly reminds her that she doesn’t have the best past. Donna reassures her that whatever they have on her, Harvey and Mike can protect her.

Robert and Rachel are in their deposition with Kittredge. Robert loses is at Kittredge’s arrogance. He tells him he will get back at him for his sister if it is the last thing. Robert’s threats on camera to retaliate doesn’t bode well for their case. He is upset with himself.

Harvey comes into the office to see Donna. She tells him that she found Holly. Harvey tells her that Holly has to come forward it can’t be on Donna’s word. Harvey has another plan.

Robert gets off the phone. His wife asks him what is wrong. He tells her Jasmine has died. He regrets not being there for her. He is crying. A young Rachel comes in the room. Robert snaps out of his thoughts to Rachel.

Mike visits Donna in her office. He tells Donna to tell Harvey how she feels. She might lose her chance. He wants her to be happy. Donna reassures him that she and Harvey don’t want to be together.

Harvey and Mike visit Andy. He manufactured a piece of evidence and they are going to the judge with it. Or he can drop the suit.

Robert and Rachel serve up a settlement that has Kittredge’s board left with the only choice but to drop him.

Harvey visits Mike to thank him for their win. Mike asks him if he has talked to Donna. Harvey hasn’t but when he does he plans on making her feel better by telling her they stuck it to Andy good.

Alex visits Gould. He records their conversation, turning the tables so that Gould can no longer harass him.

Andy visits Harvey. He isn’t through with him yet. He is going to have Jessica disbarred. Harvey is beside himself. He heads home to find Jessica there. She knew this would happen when she admitted she knew about Mike. She is ready to take her name off the wall. She needs him to talk to Louis and figure out how they will deal with this.

Louis goes to Donna and explains that he is sorry he let her down. He could not prepare her because he can’t imagine having his whole life out there, being put on trial. He gives Donna a lot to think about. Louis is in pain knowing that the love of his life is marrying someone else. Louis leaves. Harvey comes in. Donna walks to him and kisses him. He is confused and taken aback. She tells him sorry, she just had to know before she walks off.