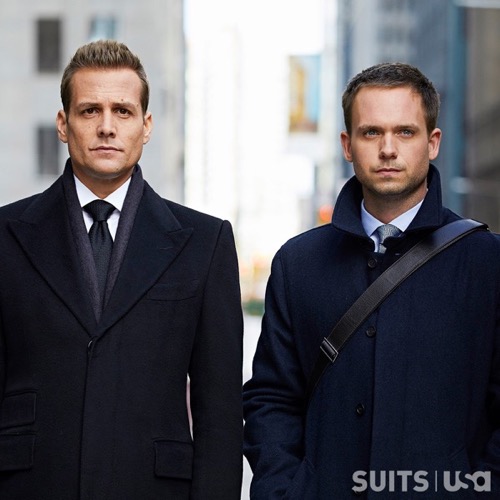 Tonight on the USA Network their critically acclaimed drama, Suits returns with an all-new Wednesday,  July 26, 2017, premiere episode and we have your Suits recap below. On tonight’s Suits season 7 episode 3 called, “Mudmare,” as per the USA Network synopsis, “Louis and Harvey (Gabriel Macht) wrangle with new firm dynamics; Mike’s latest success brings him unexpected new business; and Rachel’s leadership is challenged by an insubordinate associate.”

Louis is sitting in a mud bath, something he has always wanted to do. Harvey sits beside him in another mud bath. Alex arrives. Louis wants to know why he is there. He is upset. He starts to scream. It’s all a bad dream, he explains to his therapist as he sits in the couch. His therapist tells him he should worry less about Alex and Harvey and make a new friend.

Louis has flowers in his hand. Donna comes up behind him. She tells him to leave him alone. She has her eyes on him. Louis tells her to buzz off. He brings the flowers to Alex as a peace offering. They got off on the wrong foot. Alex brings up the poaching of his major client. Louis apologizes and offers to take him out to lunch. Alex accepts.

Mike meets with a new client. He read Mike’s interview, it’s similar to his son’s situation. His son never got out though. He died in person at a young age. Mike tells him he has to wait a little bit. The man is worried, the statute of limitations is 2 weeks away. His son was caught with an ounce of marijuana. He wants to bring him justice.

Rachel talks to an associate, who has been leaning on a co-worker to catalog for her. Rachel gives her a new project to do on her own.

Paula calls Harvey. She wants to have dinner tonight. Harvey is willing since she canceled last time. Mike comes in. He wants to give Harvey a case back so that he can take the man’s pro bono case. Harvey agrees.

Harvey heads in to see Alex. He wants him to go and meet a client. Business before lunch. He tells Alex to cancel with Louis. Alex calls him. Louis is defeated by the cancellation.

Mike goes to meet Ms. Snyder. He introduces himself. He wants to know what happened to Chris, the young inmate who died. She tells him that Chris was in a fight. He went to solitary. He had a hard time breathing. Mike wants reports, the guard’s names. She is unwilling. It’s all private. He tells her that he will get it when he files suit so she should just give it to him now.

Mike brings the victim’s father the prison report. He refuses to believe that this has happened. His son was not a fighter. Someone must have come for him.

Harvey introduces Alex to Chase. Alex gets right to it. He wants to know why Chase secretly inserted a Claus in the back of his contract. Harvey tells Chase he needs to bow out or get kicked out. Alex is close friends with someone at the DOJ. The company doesn’t need two councils.

Louis calls his therapist Stan. He is upset. He feels betrayed by Harvey after he saw him and Alex on their way out of the building. Stan tells him he needs to calm down and use his breathing exercise.

Alex and Harvey sit and have drinks. Harvey has to explain to Alex about Louis. He is Frank Burns from Mash. Alex wants to know if Louis is going to be okay with him. Harvey believes so.

Mike is at the prison. He sees the guards who were on duty when Chris died. The men get angry. Mike just wants to ask a few questions. Later that day, Mike sits down next to one of the guards at the bar. Mike knows that he is the scape goat. He wants details. The guard admits that he pulled Chris out of the hole. He had trouble breathing. He told his supervisor who in turn was going to call the doctor. The guard gets up to leave. Mike insists there is more to the story that he isn’t telling him. Angry, the man tells him there isn’t a conspiracy. The prison is cheap. To watch their bottom line they had a lean crew of guards on that night, making it difficult to get to Chris while he was getting beat on.

Harvey and Paula eat by candle light. She tells him she has an early morning. She needs to head out. Harvey asks her what is wrong. She feels ashamed of their relationship. It hit her this afternoon when she was having lunch with her mentor. When the woman asked who she was seeing, she said no-one. She is having doubts.

Rachel goes to Donna. She tells her that she gave an associate an assignment and she passed it off again. Donna tells Rachel that this is the 2nd offense. Maybe she needs to be fired. Donna tells her she needs to show her authority. Or they are going to walk all over her.

Mike calls Chris’ dad. He is going to file the lawsuit tonight.

Alex pops in to Harvey’s office. He wants Mike to drop his case. There is a conflict. The company that builds the prisons is Alex’s biggest client. Harvey tells him no. He gave Mike his word, he let him take the case.

Rachel confronts the associate who brushes her off. Donna intervenes. She tells the associate to do the assignment and respect Rachel or she will be shown the door. The associate takes the file and leaves. Donna walks away too, leaving Rachel standing there.

Harvey pays Mike a visit in the office. He tells him he needs to drop the pro bono. Mike doesn’t care. Harvey explains that this person is Alex’s biggest client. Harvey tells him to drop it or the deal they have is over.

Rachel confronts Donna in the bathroom. Donna thinks what she did was okay. Rachel is mad because she felt belittled and embarrassed. Donna suggest that maybe she wasn’t ready for her new position.

Louis is using the copier when Mike comes in angry. Mike tells him the story. Louis heads to Harvey’s office. Donna comes in. The three of them dispute over the case. Donna and Louis think Harvey has made a mistake while Harvey thinks Louis’ feelings are hurt over Alex.

Mike finds Oliver. He wants to give him his pro bono case. Oliver turns it down. He is still angry at Mike. Mike explains that he almost died in prison. Chris is him. He wants Oliver to see it through. Oliver accepts.

Rachel comes in to Donna’s office. Donna apologizes. She is sorry that she made things worse for Rachel. She got things really wrong today. “Maybe not all wrong,” Rachel tells her. She doesn’t want to supervise anyone right now. She just wants to be a lawyer.

Mike heads into Harvey’s office. Harvey asks him if he gave the pro bono case to the clinic. Mike admits he did and he doesn’t plan to do anything with it. Harvey wants it in writing, he wants Mike’s word.

Harvey pays Paula a visit. He doesn’t want her to throw away what they have because of a figment of her imagination. She admits she is scared. He tells her that they should be scared together.

Mike introduces himself to Alex. He wants to offer Alex a chance to review all of his cases to avoid any confrontation. Alex senses his hostility. Mike heads out to leave. Alex explains that he has spoken to his client – he never wants to be bulldozed. Mike agrees. They are in the same boat. They realize they have something in common. They shakes hands and smile at one another.