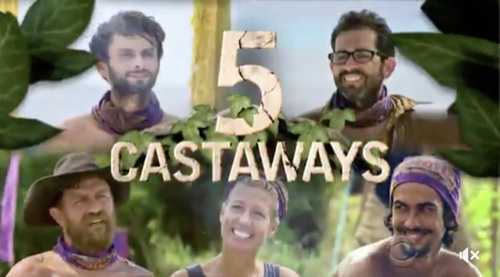 Tonight on CBS Survivor: Heroes vs Healers vs Hustlers airs with an all-new Wednesday, December 20, 2017, Season 35 Episode 14 Finale and we have your Survivor recap below. On tonight’s Survivor season, 35 episode 14 called “Million Dollar Night,” as per the CBS synopsis, “Castaways compete in an all-new immunity challenge, and a new twist is unleashed into the game. Then, one castaway will be crowned sole Survivor and awarded the $1 million dollar prize, on the two-hour season finale.”

Only five remain, Ben has turned into enemy number one – with no allies in the game can he find a way to keep his torch lit. Mike is the only healer left in the game and besides from being excluded from nearly every vote, this doctor has found a way to stay alive. Devon, true to his nature, he has hustled his way through the game controlling votes and orchestrating blindsides, but with only five players left will that grit be able to get him to the end. Ryan, this super fan of the game helped him find advantages and idols, but it’s his strong social abilities and his alliance with Chrissy that has kept him in the game; will that loyalty pay off.

Chrissy, a rough start almost sent her home and then she had control of the game, when the tides turned again she had to win immunity and she did – she is the only woman left in the game. Night 36 at Solewa, Chrissy is happy that Ashley is gone and that Ben played his idol. Mike says that Ben is a bad guy in any horror movie, you keep trying to get rid of him and he keeps coming back. The four decide that Ben is the next to go. Meanwhile, Ben knows he is vulnerable and is out looking for another immunity idol; this is more than a game to him, its a mission. Day 37, Ben is so exhausted, he looked everywhere and found nothing. All of a sudden, Ben finds a hidden immunity idol – it paid off.

Devon is up and starts the fire. Chrissy decides to make up with Ben, she asks him if they can be friends again; they hug it out and little does he know, she is only doing it for gameplay – she doesn’t trust him and wants to make sure she gets to the final four. Meanwhile, Ben doesn’t trust Chrissy and plans to play his idol and get rid of her because she is a strong competitor. Time to get the immunity challenge; for this challenge, they have to swim out to a platform, climb up a stack of crates, leap off and retrieve a set of keys.

They will then cross a balance beam and retrieve the second set of keys, they will use those keys to unlock a puzzle where they have to match corresponding balls and colors. Mike and Devon are the first ones to retrieve both keys. Mike lost time trying to unlock the puzzle, which has put Chrissy back in the game. Its down to Ben, Mike, and Chrissy. Chrissy has won individual immunity and a guaranteed spot in the final four and gets to choose two people to share comfort food with her, she chooses Devon and Mike.

Back at camp, Mike, Devon, and Chrissy went through their whole feast looking for an idol, they didn’t find any. Chrissy tells them that they should not lose the thought that Ben may just have another idol. Mike comes up with a plan to plant a fake immunity idol out of the dead super idol, so Ben finds it and stops looking for a real idol. Chrissy approaches Ben, tells him that she found an idol. Ryan thinks Ben bought it, but he didn’t and knows Chrissy’s idol is fake. Ben thinks they underestimate them and knows he has his hands on everyone’s fate. Time for tribal council, Ben is clearly the common enemy.

Chrissy pulls out a necklace and puts is on – she says it is an immunity idol and tells Jeff she will give it to someone before the end of the vote. Chrissy is gloating. Jeff asks Ben how he feels, that tonight could be the end. Ben says it sucks, it’s a hard pill to swallow. Time to vote. Ben pulls out his immunity idol to a shocked group at tribal council. Time to read the votes. Its a tie – one vote Mike and one vote Devon, all other votes for Ben are canceled out. Time to vote again, Mike is voted out.

Ben knows the final immunity challenge is very important because he has no alliance. Everyone is wondering what the twist is. Chrissy knows she can beat Ben but is really worried about what the twist is. Day 38, time for the final immunity challenge. Today they have to stack letter blocks on a very wobbly platform. The first person to spell, Heroes, Healers, and Hustlers, wins immunity and guarantees themselves a spot in the final tribal council and chance to win the million dollar prize. Time for the twist, the winner of this immunity challenge also wins the final secret advantage in the game. The stakes don’t get any bigger. It is a very tough challenge, they have to remain calm, it’s not easy.

Ryan has the early lead, but it means nothing. Ben is in the lead and nobody is close to him. No secret that Ben has been the target, he is just a few letters away from winning this and securing himself a spot in the final tribal council. Ben had one letter turned upside down and its a disaster, most of his letters fall. Most of Ryan’s letters fall. Everyone is going back to the beginning and the door is wide open for anyone to win. Ben lost again, they had to take their time and go slow. Chrissy wins the final immunity.

Back at camp, everyone hugs and congratulates each other. Ben is bumped, he knows he had to win to stay in the game and because of a silly mistake, it all slipped away from him and hurts. Chrissy says that she does feel for Ben as a person. Ben knows he is the only target, he asks Chrissy if there is any way at all that he could sit next to her at the end of the game. Chrissy doesn’t want to shut him out and promises to listen to him at tribal council, but she has no intention of keeping him.

Chrissy reads her advantage, she gets to choose one person to sit next to her in the final three. The other two will have to battle it out in a fire-making challenge. She is going to keep Ryan and make Devon and Ben battle it out, she thinks Devon can beat Ben. Ryan is thrilled, his inability to make fire is putting him in the final three. Devon starts practicing to make fire. Time for tribal council. Jeff talks about Ben having more shots on goal with the final immunity challenge and he lost it for a simple mistake. Jeff talks to Chrissy about her secret advantage, she reveals she shared it with everyone except for Ben. Chrissy reads it out, Ben appears to be happy that he is back in charge of his own fate. Chrissy chooses Ryan to sit beside her, Devon and Ben have to battle it out. 38 days in, they both should be able to make fire.

Time for the fire challenge, it is essentially a million dollar challenge. Ben has the first flame, he puts some sticks on it, can he keep it going. Ben is the only one that wants Ben to win, everyone is pulling for Devon. Ben wins the fire showdown and the final seat in the final three. Sadly for Devon, after 38 days he is going home. Day 39, Ryan is thrilled that he is there and plans on lying to the jury and telling them that he was in control of the game from the beginning. Chrissy is shocked that she set a record for winning the most immunity challenges in one season by any women. Ben feels like he has been full throttle from the beginning and plans on continuing to battle but go in front of the jury humble and confident. Its time for the final tribal council, all the jury members are called in and tonight the power shifts to the jury. The final tribal council is centered around the three aspects of the game; outwit, outplay and outlast.

Desi is up first, she tells Ryan that everyone felt they could beat him in the final three and that is why he is sitting there. Ryan says that is game was a social game, he aligned with Chrissy and he is the one who created the seven alliance. Devon confirms that Ryan’s game was a social one.

Ben gets the social question and says it is hard for him having been in the Marine Corp, he is not very social. Chrissy jumps in and says that she got to the final three because she stayed loyal to her alliance and was very social, she knows things about everyone’s personal lives. Ashley calls Chrissy a genius for getting to know personal details about the other tribemates so she could figure out how they tick Cole calls out Ryan for having barely any survivor skills; Ryan agrees and says he left it to everyone else because they were better at it. Ryan reminds everyone that he found the first advantage.

Chrissy says that she was terrified of the first challenge and somehow she found the courage and ended up winning four of them. Ben says that he had no alliance, in the end, he looked for idols all the time when everyone else was sleeping because the only one that was going to save him was him.

Mike tells Ben that win or lose, he has played one of the best games in Survivor history and win or lose, he wants to know why he believes that he should win. Ben says that he never quit looking, he never quit battling – nobody helped him in the game. He admits he suffered from PTSD and it has been hard, he did this for his family and it can be done. Chrissy says that she kicked ass in the challenges by playing a good clean game and all moms are heroes.

Time to head over to the reunion show and to find out who won Survivor HERE!