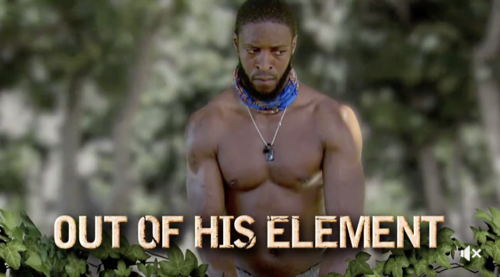 Tonight on CBS Survivor: Heroes vs Healers vs Hustlerss airs withan all new Wednesday, October 11, 2017, Season 35 Episode 3 and we have your Survivor recap below. On tonight’s Survivor season, 35 episode 3 called “My Kisses Are Very Private,” as per the CBS synopsis, “One castaway’s romantic feelings for another tribemate may cause them to spill secrets, and another player’s lack of social skills threatens their game.

Tonight, Survivor Season 35 continues on Day 7, with 16 survivors remaining. We begin in at the Hustlers (Yawa) tribe’s camp. Ryan jokes that Simone left a lot of clothing behind so it was kind of like a yard sale that morning and Patrick puts on a suit and Ryan laughs that her knee high boots would be practical and finally Simone is showing her worth in some capacity. Both Patrick and Ryan feel that Ali is an asset to their tribe while Lauren has nothing to really offer the group and both feel she is the next one to go.

Lauren and Ali wash in the ocean and talk about trying to keep it the same for the next few days. Lauren knows she survived tribal council but still feels like she is on the outside. Devon joins them in the water agreeing that Patrick made them all feel uneasy when he blurted out that he didn’t trust everyone; Ali worries if Patrick goes he is strong in challenges and works extremely hard, but he doesn’t understand how the social aspect of the game is vital too. Ali feels she needs him, so she needs him to stop rubbing people the wrong way.

Day 7 at the Heroes (Levu) camp, Chrissy and Ben feel everyone needs to work with them as they are in the prime position; moving forward they need to figure out who is the next target as they seem to be the ones driving the tribe – Alan is a loose cannon and a hothead, but JP is walking around like he doesn’t know what is going on, but JP is good to keep around because of his fishing skills.

Alan is upset with himself because he is unable to open a coconut, while the rest of the tribe can. He says this is not his element at all and it’s tough out there. Ashley admits that JP is getting dreamier and dreamier every day, especially when he has a different creature on the end of his spear each time. He is becoming more and more the provider in the tribe and less and less like Alan; but she can’t talk to him alone because of Alan accusing them of being a “power couple” from the beginning.

She is ready for Alan to go because he is unpredictable; she voices her opinions to Ben about Alan and that JP can be their puppy but Ben thinks he can easily be led by another. Ben is still uncertain whether JP and Ashley are a couple or not.

Day 7 at the Healers’ (Soko) camp, Joe is concerned that Cole knows he has the idol and may end up telling Jessica. They love deepening their connection while fishing but outside of Survivor, Jessica admits she moves like a slug when it comes to romance and isn’t even sure she knows what romance means. She comes from a super religious family and is still a virgin, she hopes though, that they have a long time together still.

While lying on the beach, Cole guarantees her that she is safe. He thinks she is his dream girl and reveals that Joe has the idol, they found it together. She knows it’s to her benefit to have that knowledge and kisses him on the cheek.

As Day 8 begins, Patrick walks off and everyone knows he is off searching for the idol. Ryan feels this is not a good thing for relationship building and makes people paranoid. Patrick has idol fever but doesn’t care what the others think. Ali tells Patrick that him going idol crazy is going to make people wonder why he is so worried. He appreciates it but feels he can’t calm down and develop friendships if he can’t be himself.

Tribe Soko, is eating and Joe is complaining about the cooking and instead of offering it to someone else to eat, he throws it in the woods in disgust. Desi feels that is “off putting” as food is scarce. Cole is concerned that Joe has all the power and he is rubbing everyone the wrong way. Cole talks to Jessica about blindsiding Joe and send him home with the idol in his pocket, so he decides to go around and tell Desi and Roark; Jessica worries it was too soon to share that kind of information; she feels he should have waited until after the challenge and then speak to her again. He is convincing everyone to pick Joe over Mike.

Host Jeff Probst welcomes the tribes, and they learn Simone was voted out at the last tribal council. Today’s Immunity Challenge they will have to race through a series of obstacles, then use sandbags to knock blocks off a ledge. They must then stack those blocks one on top of the other, the first two tribes to finish win immunity safe from the vote. There are also rewards tonight – first tribe to finish will receive 4 chickens (1 rooster, 3 hens) and the second tribe to finish will get a dozen eggs. The Healers choose to let Mike sit out of the challenge.

Heroes and Healers switch out players but Patrick refuses to swap out. Healers is up first to gather their blocks, then Heroes but Patrick is still firing for the Hustlers, while the other 2 teams are stacking. Jeff says this is reminiscent of their first challenge and having to use each others shoulders. The Healers think they are done, but don’t see the one block sitting behind a pole, they quickly rush but Heroes are done first, then the Healers are second and the Hustlers are back to Tribal council again.

Patrick says it’s quite depressing going back to tribal council but Lauren says they have to do it. They lost the challenge, but it’s because Patrick feels he is a one-man show and she wants to be sure Patrick goes home tonight.

Back at camp, Patrick apologizes for not going fast enough and should have had someone take over; Lauren says he cannot justify it. Everyone else tells him not to be sorry because he tried his hardest, Lauren walks away and they say Lauren wants Patrick out but they are voting her out instead. Patrick joins in the water, saying he feels terrible but wants her to have a sense of safety and enjoy her time before she goes home. Lauren says it makes no sense that Patrick cost them the win but they are voting her to go.

Lauren says today should have been a win for them and says that Patrick should have made it a team and not an individual challenge. She says he needs to realize they need to win as a team and lose as a team. Patrick says he understands. Ali doesn’t like to dwell on things and says even if they switched it out, it could have been even longer. Patrick is glad he isn’t being held totally accountable for the loss. Lauren protests, saying Patrick is all about the idol and she hasn’t looked at all. Patrick says now he thinks Lauren has an idol, she winks at Ali and says she has two of them. Lauren says she has never trusted a red-head in her life.

Ryan admits they are not a happy group and they aren’t successful so someone is influencing the group in a negative way; Devon says his vote is based on what can make the chemistry flowing in their group. Lauren agrees as Ryan talks about merges. Patrick says he gets along with everybody as Ali rolls her eyes because if that is the case, how come he can’t get along with Lauren. It is time to vote and Lauren is up first.

The votes are in, Jeff goes to tally the votes; no one has a hidden immunity idol to play. Patrick – Lauren – Patrick – Patrick; that is three votes and enough to vote off Patrick, who brings up his torch as his fire is extinguished. Patrick says, “You guys are awful!”