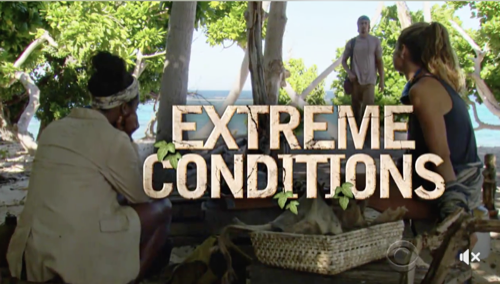 Tonight on CBS Survivor: Heroes vs Healers vs Hustlers airs with an all-new Wednesday, November 8, 2017, Season 35 Episode 7 and we have your Survivor recap below. On tonight’s Survivor season, 35 episode 7 called “This Is Why You Play Survivor,” as per the CBS synopsis, “The castaways drop their buffs and merge for a big feast. Later, the first individual immunity challenge takes place.”

Day 16 at the Soko camp, Chrissy reveals how badly she wanted to smile when Ali was voted off and feels she is dominating the social aspect of the game and both guys are close with her, than they are with each other, which leaves her potentially in the power position.

Day 16 in the Yawa tribe camp, Cole feels great with his tribe because they trust each other explicitly now. Ben is good, Lauren will stick with them and him, Jessica and Mike still have the bond of being healers still from the beginning. He doesn’t see any of the other teams staying strong together; Ben says if they go into the merge, guns blazing and five strong, they can do all right, but his concern is Cole and it’s hard to trust them as him and Jessica play pattycake all night long.

At the Levu camp, Ashley says they are a broken tribe, her and Devon versus Joe and Desi. She feels things need to get better because, on top of all that, they are out of all food – no rice, no chicken nor fruits, and vegetables. She says Survivor is no joke because if they don’t get food today, they might die. Devon is barely moving, running on empty, they are eating the little bits of sugar they can find in their jar. He feels this is the saddest point of his life and if they don’t get this win in the reward challenge, he doesn’t know what he is going to do.

Before they begin what they thought was the reward challenge, Desi admits to Jeff that they are worn down as they literally have nothing to eat at their camp. Jeff tells them to drop their buffs are they are merged and everyone says this is the greatest feeling ever because once the merge happens, that is when Survivor really begins. Everyone is given a purple buff and worry that there is a catch.

Jeff says they are right because typically when you merge you get a big Survivor feast but that is not going to be the case today because they have something better and have brought Outback Steakhouse to Fiji. They celebrate as Jeff explains the decadent food they are getting today. Chrissy says this is the first chance she has had to meet Joe and she is glad she hasn’t met him before because he is so loud and obnoxious. She doesn’t trust that Joe may have the second idol when he openly admits he had the first one. Chrissy is thrilled to be with Ben again, but he isn’t liking that she is talking with him so openly, worrying people will think they are a tight alliance because now its time for himself and individuals.

The tribe gets together and begin to build shelters, Cole worries that he needs to find something as people will be talking a lot and strategizing, but as he picks up a nail he totally misses a message among the nails. Everyone begins to go their own way to build their own alliances. Jessica hopes all the healers will work together, while Ryan and Devon feel it could be the hustlers and heroes together against the healers.

Day 18 with new Tribe Solewa, they all feel the strongest truly made it to the last 12. Heroes and Hustlers want the Healers gone but Lauren doesn’t agree as her alliance is with the healers; she tells Mike what Ryan and Devon told her about taking out the healers. Mike knows the line has been drawn in the sand and he expects a war.

Devon tells Ben and Chrissy that their best case scenario is to take out Cole or Joe; Chrissy admits she couldn’t even handle a whole lunch with Joe. Joe knows how to play the game so that makes him a threat to others while Cole is a physical threat. Ben is listening to everyone but could go either way as it boils down to him trusting Cole because he is selfish and doesn’t respect anyone. Jessica acknowledges the big mistakes Cole is making but Cole is her number one and has a deep connection with him and feels it’s time for another chat. Jessica reveals everything to Cole about what Ben just said to her.

Ben talks to Mike, saying Cole is the biggest threat and if they vote out Cole now, everything they worked on the last 9 days goes out the window. Mike tells Cole that everyone is gunning for him or Joe. Cole hopes his alliance will keep him going.

Day 19 arrives and so does their first individual Immunity Challenge. Jeff explains the rules – they are to stand on a narrow beam while spinning a ball inside a circular wooden track, at regular intervals they will be moving down the beam, making it more difficult. If the ball drops or they step off the beam, they are out of the challenge. The last person standing, wins immunity and is safe at tribal council and one of the losers will be the 7th person voted out of the game.

Ryan is out, two seconds into the challenge. Mike drops his ball when he takes his first step and we are down to 10 in this brand new Survivor challenge. Another step is taken and balance becomes more difficult, Jessica drops as Joe sweats profusely. Ben can’t make the transfer, JP drops and is out too, Devon is out and we are down to 6. Lauren drops. Joe drops and they are down to 4 – Desi – Cole – Chrissy – Ashley all fighting for immunity.

Ten minutes elapse and Cole is out, as soon as he drops, so does Chrissy, leaving Desi versus Ashley for immunity. It is time for sudden death where both feet need to be in the narrowest part of the beam, Ashley can’t make the move and Desi wins the first individual immunity and the first person to wear the Immunity necklace!

Back at camp, everyone was impressed with Desi and Ashley’s performance. Cole is worried because of how his eating habits are rubbing people the wrong way. He goes to speak to Ben, apologizing admitting he doesn’t really think about what he has been doing. Ben says that is a first step but he needs to think tactically, not emotionally and if he has to work with Cole to get further in the game, he will.

Cole goes to speak to Joe, revealing that him, Ben, Jessica, Mike and Lauren are all voting the same and have a pact. Joe warns him that Ben is playing both sides and Joe jokes, saying he goes off at tribal, he has an idol he can use and it will be his decision at the last minute. Mike feels that Chrissy is a bigger threat and they need to get rid of her because she is super smart; he attempts to bring Desi in with them but Mike questions whether Ben is with them or against them.

Lauren talks to Ben, who are really caught in the middle and it feels like a whole new game, making it very hard to make the right decision. Chrissy feels they need a plan B in case one of them has an idol, so they have someone next in line for backup. She suggests they should split up Jessica and Cole, as they are getting too tight. Ben worries if he has to break things with Chrissy and stick with the Yawa tribe. Tonight battle lines will be drawn and it will not be pretty!

Everyone lights their torches who hasn’t been there before. 5 Healers, 4 Heroes and 3 Hustlers left going into tribal council; Ryan says they have those original divisions but also the divisions of the tribes they had for the last 8 days as well. Mike says he sees people scrambling and today they have really heard only 3 names, so for all 12 people to be nervous, he is calling BS. Cole says he trusts his tribe and alliance and isn’t worried. Lauren says now they need to think of the threat level of everyone for right now and down the road or if they just get on your nerves; Chrissy agrees, so does Joe.

Joe talks about some of the people backstabbing the others; Mike mocks him as Joe is exactly who did that to him from day one. Joe pulls out his second idol, puts it around his neck and everyone feels it is ridiculous. Devon is worried that this is his first and last tribal council. Jessica says idols change this whole game. Devon says he still trusts Joe as Ben says the lines are drawn and they will see who is aligned with who as it is time to vote.