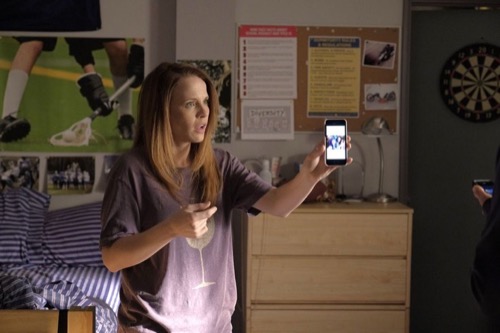 Switched At Birth returns to Freeform tonight with an all new Tuesday, February 7, season 5 episode 2 called “This Has to Do With Me,” and we have your Switched At Birth recap below. On tonight’s Switched At birth season 5 episode 2 as per the Freeform synopsis, “A photo of Daphne (Katie Leclerc) and Mingo dressed up as famous singers at a party goes viral, prompting a discussion on race relations and free speech. Meanwhile, Bay (Vanessa Marano) seeks a job a tattoo parlor; Kathryn and John (D. W. Moffett) court a new shortstop; and Regina and Luca work on a school project together.”

Daphne wakes up to find Mingo sleeping on her floor. He receives a text telling him he is a racist because of his costume as lil Wayne at the party the night before. Daphne also gets many negative responses about her white privilege. Kathryn and John talk about a new perspective pitcher who would be a great addition to the team.

Bay stops by the house and let her parents know she plans to interview at the best tattoo parlor in town. Regina and Luca talk in class and he tries to convince her he isn’t too young for her. Mingo and Daphne try to figure out why dressing up like their favorite musician is racists. Mingo can’t figure out why no one at the party had a problem with them but now it is a huge deal.

Bay shows up at the tattoo parlor without an appointment and interrupts the owner as she is in the middle of a tattoo. Bay is told they are NOT hiring. However, there are several sorority girls waiting for tattoos and Bay convinces the owner to let her help out.

Daphne goes to speak to Iris about the lil Wayne issue. Iris tells her that she was very offended and leaves. Bay impresses the owner with her skills but is told that she does not have any openings. The owner offers Bay an apprenticeship if she wants that. Bay eagerly accepts the offer.

Bay meets Travis and shares her news but he is angry because she is late. He leaves in a huff but does congratulate her on the job. Daphne runs into Sharee on campus and asks her if she was offend by the costume. Daphne says she feels like she needs to do something about all the negativity. Sharee suggests she let it go.

Kathryn and John have dinner with the possible new pitcher, Chris and try to convince him to join their team. He says he would love to come but he will need a car. Kathryn replies it would violate NCAA rules for them to buy him a car. Chris responses that the school he visited the day before offered him a Mustang. He again states he wants a car.

Regina, Luca and their classmate meet to discuss their group project. Daphne is shocked when she is asked to sign a petition to remove Mingo from his RA because of the “racist” costume he wore at the party.

Bay and Daphne are at their apartment and work together to write an OP-ED piece for the school paper in response to the petition. Bay says the response is bold and asks if Daphne is sure that she wants to step into the spotlight. Daphne says she has to. It is a matter of free speech.

John argues with Kathryn that he NEEDS Chris for his team and that his players deserve to be paid. John says he knows a car dealer who would lend Chris a car to use while he is at school. Kathryn says it is still against the rules. She tells him she will not let him break the rules and brings up their old tax problems.

Bay works at the tattoo parlor answering the telephone. A customer looks through her book and asks Bay to do her tattoo. Bay tells the girl she needs to speak with Noelle (the owner) but after some convincing Bay completes the tattoo.

Regina and her classmates bring in games to the coffee shop as part of their class project. Daphne and her classmates have a debate about freedom and speech versus students fearing their RA is a racist. The argument gets very heated and Daphne is quite upset.

Mingo and Daphne meet and she offers him support before his meeting to defend his job with the RA board. Regina offers Daphne support but says she would have also been offended. Daphne understands but argues in our county it is our right to act offensive AND to be offended. That is what freedom is about. Regina is proud of Daphne of standing up for what she believes in.

Noelle confronts Bay when she sees the tattoo she gave the customer in her shop and fires her. Kathryn meets with Chris and tells him there will be no car and no money, but if he comes to their school he will be working with an incredible coach. He will also get a wonderful education. Chris leaves saying if he isn’t paid he won’t be coming to their school.

Bay tells Travis she got fired. He is sorry but has to go to practice and can’t talk with Bay. She wishes they never left China. The game night for the class project goes well for Regina and Luka. Mingo is thrilled to tell Daphne that he gets to keep his RA job. She goes to speak to Iris and finds out she has moved out of the dorm.

Bay returns to the tattoo parlor to get her portfolio that she left behind. She over hears three men speaking in Chinese talking about robbing Noelle. Bay chases the men away. Noelle reviews the portfolio and tells Bay she has talent.

Regina and Luka happily talk about the success of the project and they kiss. Kathryn and John talk about their disappointment about Chris not joining the team. As they talk there is a knock at the door. Chris turns in his signed letter of intent. Not because he changed his mind but because the news of the car became public and the other school rescinded their offer.

Bay returns home to candles burning and Travis standing happily in the living room. He has decorated that apartment as if they are still in China. They kiss. Daphne finds Isis and they argue about Daphne’s newspaper piece. Isis helps Daphne understand her feelings and why she is moving out of the dorm. Daphne feels horrible about the situation.