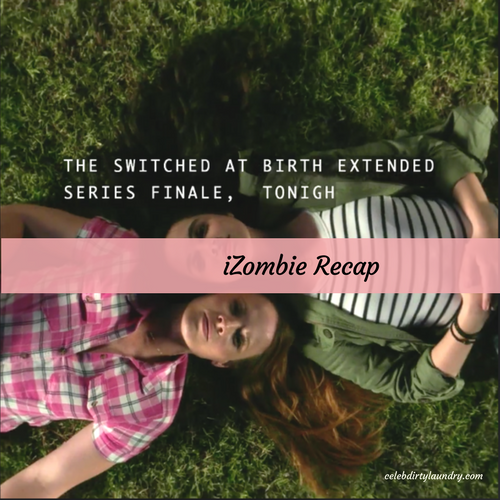 Switched At Birth returns to Freeform tonight with an all new Tuesday, April 11, season 5 episode 10 called “The Wolf Is Waiting,” and we have your Switched At Birth recap below. On tonight’s Switched At birth season 5 episode 10 as per the Freeform synopsis, “In the series finale, Kathryn realizes it has been five years since the switch was discovered and uncovers a long-buried family secret. Meanwhile, Daphne competes against Mingo for a paid internship; Bay is celebrated for her tattoo work in a magazine.”

Kathryn and Regina talk and Kathryn can sense something is off. Regina explains that it has been five years since they met. They reminisce of the battles they had when they first met. Regina decides its time she move out of the guest house freeing it up for Toby and his family. She so appreciates Kathryn and John’s generosity. Bey is thrilled to share with Kathryn and John that she is going to be featured in a magazine and they are all invited to the party celebrating her accomplishment. John presses Travis for his decision about playing in Japan and he says he will go. John is thrilled but Travis hasn’t told Bey yet. He wants to wait until after the party.

Iris and Daphne run into Mingo on campus and he apologizes for everything that happened between them. She accepts. Mingo is also going to a lecture Daphne will be attending. Toby is not as happy as he used to be about being a DJ. Luka asks Regina to move together and she accepts. Bey is down because her dad is not thrilled about her job. Her boss tells her she has to give a celebrity a tattoo and her name will become well known. Mingo and Daphne both apply for the same internship.

Regina feels guilty about the kiss she shared with Eric when he returned. She realizes that she is still in love with him. She toys with the idea of joining him. She realizes she has to be honest with Luka. Daphne is very excited about the internship. It feels like all part of her life come together with this opportunity. Iris helps her with the interview. Emmitt and Melody decide to move to Washington DC since she has been offered a job as Dean of Gallaudet. Kathryn is looking through old papers and finds the DNA results and finds an unopened letter. The letter and realizes he knew about the switch and never told her.

Daphne’s interview is cut short because the surgeon treats her horrible once he realizes she is deaf. He tells her to leave because she is living in a fantasy world if she thinks she can be a surgeon. There is no way due to her disability. The party for Bey is incredible and the photo’s in the magazine are also great. They were shot by Emmitt and he did a great job. Kathryn tried to slyly ask John about the day they found out about the switch but he quickly changes the subject. Bey is proud of her accomplishments but John struggles to be excited. He can’t hide his pride of Daphne’s wish to be a doctor however. Bey is obviously hurt. She tells Daphne and Toby that their dad thinks she is a failure.

They laugh about the many times they got in trouble with their parents and all the crazy things they have done. Bey’s boss introduces her to a big start at the party and she says she wants Bey to give her her next tattoo. Bey is thrilled. Regina breaks up with Luka, she still loves Eric.

Daphne tells Kathryn that she can’t be a doctor because of her disability. Her deafness is just too big an obstacle. Kathryn tells her she can do anything she sets her mind to. Daphne cries and they hug. Toby has a job interview in a club that is interrupted by a man with Down syndrome who is laughing loudly. The man is asked to leave and he gets upset. Toby intervenes and helps calm the situation.

Bey tells her dad about the new big client she just landed. He asks her if this is really her plan. They argue and he says this isn’t a career. Bey argues that she has turned her art into a career but he disagrees. Bey says he doesn’t support her because she isn’t his blood. He denies it but she feels he 100% supports Daphne because she is his biological daughter.

She also can’t believe he kicked her boyfriend off the team. He yells that he is the reason Travis will play professional ball in Japan. She doesn’t know what he is talking about.

Travis tells her he knows it’s a lot to ask but he wants Bey to come with him to Japan. He wants them to be together forever and he promises when this is over he will go anywhere with her. She will think about it. Kathryn confronts John and he admits he had the DNA test done but had no idea the girls had been switched. He thought she had cheated on him and another man was Bey’s father.

Daphne and Regina talk about her recent breakup and the last five years. Bey gets advice from Kathryn about if she should go to Japan. Kathryn forgives John when she realizes he didn’t leave her when he thought she had cheated on him. He says they are family no matter what. She encourages him to talk to Bey.

Bey asks Emmitt to help her with something crazy. Toby’s experience in the club makes him realize he wants to go to school to learn how to advocate for people with disabilities. Emmitt want to go with Travis to Japan but Bey is going to stay. She knows that they are strong enough to make it in a long distance relationship.

Daphne and Iris go back to the Dr. who treated Daphne so badly and she tells him off. She recites the American’s with Disabilities Act and tells him she will be a surgeon. Regina goes to Eric and begs him to turn himself in. He may have to go to prison for a short time but she will take care of Will and they will be waiting for him when he gets home. Mingo tells Daphne that he broke up with Amy because he is in love with her. They kiss.

Kathryn throws a DNA party and the whole family is there. John and Bey make amends when John apologizes. Regina tells the family she is moving and will be raising Will until John gets out of prison. Kathryn is so thankful they all learned the truth five years ago. Daphne asks Kathryn if she can call her mom. The whole family hugs and cries. They go to the front lawn to watch a comet go over head. It is a once in a life time event.