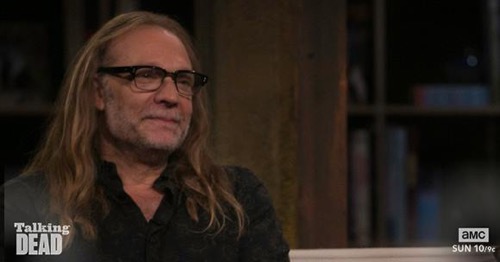 Tonight on AMC their highly anticipated series Talking Dead featuring Chris Hardwick airs for an all-new Sunday, February 12, 2017, episode and we have your Talking Dead recap below.  On tonight’s Talking Dead Season 7 Episode 9 Winter Premiere the “Rock in the Road” as per the AMC synopsis, “Khary Payton (King Ezekiel), Executive Producer Greg Nicotero and NFL running back DeAngelo Williams discuss the Season 7 Mid-Season Premiere, “Rock in the Road” from The Walking Dead. Hosted by Chris Hardwick.”

Nicotero explains that filming this mid-season premiere was the opposite of filming the season premiere. Everyone wants Negan dead. People tell him on the street, and everywhere he goes that Negan needs to be gone! Rick is back though, he isn’t going to take it anymore. Rick and Michonne are on the same page as seen with the car splitting walker scene.

Payton explains that it was weird for him with the second half of the season premiere. He finally got to meet the whole cast and crew. Acting with all of them in his first scene was surreal, he actually forgot his lines. He was star struck, having been a Walking Dead fan.

DiAngelo explains that he first became a fan of TWD when he was on a flight to China. He played TWD game and by the time he got off the flight he knew he was going to be addicted to the show. He made his wife wed him in a traditional wedding, but the next day they had a Walking Dead wedding. Nicotero shows off DiAngelos’ NFL trading card where he is a zombie. Khary wants one of himself!

Lenny James talks about what happened for his character Morgan in this premiere. He lied about not knowing where Carol is, he lied about killing someone to Rick and Daryl and how he learned about who Negan killed. He knows a storm is coming and why Rick is there.

Payton discusses how his character tries to keep the peace and how he wants to keep his people safe. Ezekiel is the 1 leader who has avoided getting his people killed.

Chris wants to know why Ezekiel asks Morgan his thoughts on fighting the saviors. Payton thinks Morgan reminds him of home, he is a badass, he is a thoughtful warrior. Ezekiel doesn’t know Rick and his people. He isn’t just going to go to war. He needs to think of his people.

Andrew Lincoln discusses how Rick and Morgan first spoke after being reunited. His concern was with Carol. They is a great deal of suspicion and confusion.

Greg explains the Easter eggs seen in the Kingdom. Nicotero shares that his kids were in this episode, shooting arrows in the background in the Kingdom. Payton has named all of the pieces of Ezekiel’s wardrobe; Mulder, Captain Jack and so on.

Nictero explains that he tries to shoot at the opposite angle of the character for scenes to give them a chance to work up their momentum.

Hardwicke talks about Gregory. DiAngelo thinks he is a coward. Not everyone wants to lead so he managed to step up into the role, a role he doesn’t deserve.

DiAngelo and Payton fight over DiAngelo being a Falcons fan.

Khary, how does Ezekial feel when Benjamin tells him they need to fight? Khary thinks his character appreciates Benjamin’s opinion. He needs to take everything in from all angles before making a decision.

DiAngelo thinks the King needs to leave her alone. She might put him in harms way.

It’s just one big battle scene. Andrew Lincoln felt like it was a Mission Impossible moment. It felt good, like they were back.

It was like wiping out a football field of walkers. It’s a difficult sequence to pull off.

Nictero shows the storyboard art behind the scene. They shot the sequence in 2 days. So many elements go into a scene like this. DiAngelo doesn’t understand how the gang new there was gas in the cars. Nictero explains that the Saviors put the cars there.

The sneak peek for next week reveals Ezekiel meeting with the saviors. Ezekiel gives them his delivery. They think it looks light. One of the saviors doesn’t think Richard should have a gun. They both pull their guns. There is trouble ahead.