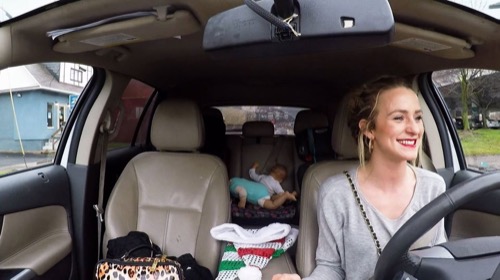 Tonight on MTV Teen Mom 2 returns with an all-new Monday, July 24, 2017, episode and we have your Teen Mom 2 recap below. On tonight’s Teen Mom 2 Season 8 episode 2 as per the MTV synopsis, “Briana is faced with a heart-wrenching decision; Kailyn’s friend reveals some very personal information; Jenelle and Nathan confront each other in court; Leah tries to reunite Addie with Jeremy; and Chelsea brings home new baby, Watson.”

Teen Mom 2 should be another episode filled with crazy drama. So make sure to bookmark this spot and come back for our Teen Mom OG recap tonight from 9PM – 10PM ET! While you wait, don’t forget to check out all our Teen Mom 2 recaps, spoilers, news & More, right here.

Briana had found out that ugly truth. She had learned from Luis’s other girlfriend that he had been cheating on her for months and that he wasn’t only with Briana because of the baby. But Briana had thought that they were going to be a family and so she had needed to speak to her own mother about this new position she was in however her mother hadn’t taken the news wells. She thought that Briana was set and had been devastated to find out that her daughter was in the same position as before – a new baby and no father to rely on. So Briana’s mom was heart-broken.

The older woman knew that she couldn’t be there for Briana like she was with her older granddaughter and so she worried about Briana doing things with little help from anyone else. However, Briana’s sister on the other hand was more concerned about what Briana would do about her relationship with Luis. The sister thought Briana should just break up with Luis because he clearly didn’t deserve her yet Briana wasn’t so sure about what she should do. She had thought that Luis was different and so she wasn’t sure about what she wants now.

Yet, Jenelle and David had made up. The two had been arguing over what to do with Kaiser and Jenelle said that she couldn’t handle the toddler on her own because she was heavily pregnant though her fiancée David had wanted both her and Kaiser out of the way as he moved their stuff to the new house. So what should have been a simple fight blew up to the point that Jenelle took the baby and went to a hotel seeing as she felt she wasn’t getting the necessary support. And the two didn’t return home until David had apologized.

David had later realized that he could have been a little better about his position and so he had apologized for cursing at Jenelle. Though Jenelle had reminded him that he had had an attitude with her all day and so he also had to apologize for that as well. So Jenelle and David were able to finish moving and the new house was slowing coming together, but some of the bigger issues surrounding their fight had seemingly been pushed to the side and they were once again a happy family. And even little Kaiser had liked his new room.

So not that long after Jenelle complained about being on her own without help that she decided to change her ex’s visitation. Jenelle had told David that she wanted to rearrange Nathan’s visits because she couldn’t trust leaving him her son Kaiser alone with his father Nathan and so she wanted to lower the amount of time Kaiser was with his dad as well as demand that Nathan was monitored whenever he had visitation. But that wasn’t the only thing that Jenelle had gotten into. She also didn’t want to tell her mother that she moved and has been holding off on mentioning anything.

She said that she didn’t want her mom starting anything with her and she would be happy not to say anything to the other woman, but she had needed to give her new address to her mom in order for her son Jace to come over. However, before Jenelle could truly oust people out of her life, she first had to go to mediation with Nathan. Nathan had once taken her to court to establish his parental rights and had said that he regretted giving up on that once before. So he will surely have something to say if Jenelle tries to take even more weekends away from him.

Chelsea on the other hand was finally on a great position with her new husband and two children. The family welcomed Watson Cole DeBoer on January 25th and the baby’s big sister Aubree is still adjusting. The little girl for example had tried telling her mother that she was still her baby and that she was also small however she didn’t appear to hold any sort of grudge against Watson and had been happy to both hug as well as tickle him. So it was an adjustment and so far the happy family are doing well. And thankfully they’ll always have grandpa.

Chelsea’s father was a big help to her when she first found herself pregnant with Aubree and he continues to be very supportive. He had been one of the first people to come over and see his new grandson yet he also taken Aubree out so that she could still have some of sort of quality time. Though Aubree still threw the occasional tantrum. She grew upset in the car when she found out that Cole was going to hang out with his friends and wasn’t going to take her. So she cried until her mother threaten to take away the IPad.

It would have helped, though, if Cole hadn’t laughed. He had tendency to laugh as a way to release some of the tension and so Chelsea had called him out on that because she thought he was just making it worse by laughing. But while Cole and Chelsea were dealing with his laughter, Nathan had surprised everyone and had agreed with all of Jenelle’s demands. He said that his lawyer had advised him to bend over backwards and that he had only did it because he hadn’t wanted to give up joint custody.

Nathan had said that maintaining joint custody was his primary concern and so he didn’t mind his mother supervising his visits with Kaiser. However, he thought that Jenelle was going to keep coming for him until she gets what she wants. So he said that he didn’t mind paying more child support or seeing Kaiser every other weekend rather than three weeks out of the month yet he thought that Jenelle wanted primary custody. And he had apparently accused her of that while they were in mediation.

Kailyn though was still getting used to her divorcee and she found herself trying to establish boundaries between her and her ex-husband Javi. Javi would visit her after he dropped off the boys and he would do things like going through her fridge which frustrated her. She kept having to tell him that he couldn’t just go in her fridge and that he should talk things over with her before he said anything to the boys. Like when he told them that he could be redeploying soon and hadn’t waited it until that had been confirmed before he upset the boys.

Though other than that, Kailyn and Javi were having an easier time of co-parenting. She would take her other son Isaac to go spend time with Javi and Lincoln so Javi had meant it when he said that he wanted to stay a part of Isaac’s life as well. So things would have been going great for her if she hadn’t just broken up with someone and found out she was pregnant on top of it, but the news was out there now and so Kailyn decided to embrace it. She decided that she was going to start filming as being pregnant and that came as a shock to Isaac’s father.

In the meantime, though, Leah had had some difficulties with arranging her daughter’s time with her ex-husband Jeremy. Jeremy traveled for work and so his daughter Addie couldn’t see him as much as her sister saw their father however Leah had talked things over with Jeremy and he had agreed to take Addie only to be late for the drop-off. Which caused the little go to sleep and she was cranky when her dad finally came to pick her up. And so Leah was glad that Jeremy was making an effort except she wishes that he would be more prompt in the future.

And while Luis had said that he wanted to be part of both Briana and her daughters’ lives, Briana had started to think about adoption and she was questioning if that would be best for everyone in the long run.