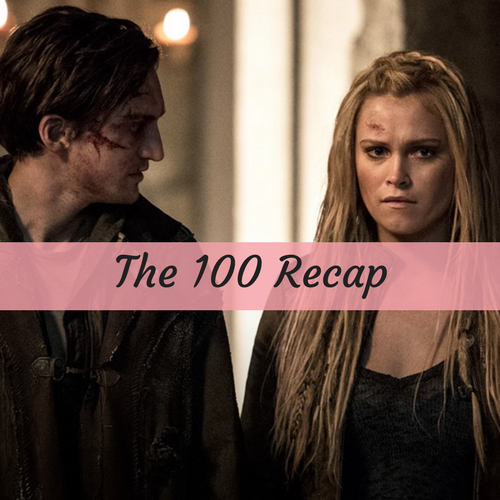 Tonight the CW series The 100 airs with a Wednesday, March 15, 2017, season 4 episode 6 and we have your The 100 recap below. On tonight’s episode called, “We Will Rise” as per the CW synopsis, “Clarke and Roan travel through hostile territory in order to deliver an invaluable asset to Abby and her team.”

So make sure to bookmark this spot and come back between 8 PM – 10 PM ET for our The 100 recap. While you wait for the recap make sure to check out all our The 100 news, spoilers, recaps & more, right here!

The Ark is destroyed. A crowd of angry men attack Ilian because of what he did to the Ark but Kane comes to his rescue. Raven uses the pod to practice entering orbit but runs out of fuel and the pod explodes. She needs more practice before she can actually fly the pod. She tries the simulation again. Clarke leaves Niyleh’s bed to take the jet fuel to her mother. She asks her to wait for her to return and they kiss goodbye. Monty assesses the Ark and the damage is too great to be repaired.

Clarke, Bellamy and Roan leave to take the fuel to Abby but the journey is very dangerous due to how volatile the fuel is. This is the last hope for their survival. Bellamy goes to check on Octavia but she refuses to speak to him. She will never forgive him for killing Lincoln. Raven fails the simulation again. She lashes out at Murphy and has to be restrained by Luna. She tries to fly the ship again.

The caravan comes up to a gang of Trecrew. Their leader is injured and Clarke tries to help him but can’t. They realize Roan is with them and attack but Bellamy drives the caravan away before anyone is hurt. The caravan comes upon a river and try to find a place to cross. Luna and Murphy talk and she tries to encourage him to make peace with his demons. Octavia does therapy on her leg and gets stronger every day. She tells Ilian he doesn’t have long to live.

Roan and Bellamy return after finding a place to cross the river but everyone is gone except for one of Roan’s men who is dead. They realize it must have been Trecrew and they head to Polis to find them.

The people in Arkadia are still calling for the killing of Ilian. Monty begs Jaha to say something to calm them down but he refuses. Raven decides to try landing the pod in the water in the next simulation and it works. Roan and Bellamy are attacked by Trecrew and Roan realizes they don’t have Clarke and the fuel. His people took it. The angry men attack the med bay and overpower Kane. They take Ilian and string him up outside. Roan and Bellamy catch up to Clarke and Roan jumps onto the truck. He pushes the traitor off and secures the fuel. Bellamy shoots the man in the cab with Clarke and she stops the truck just in time before it crashes into Bellamy.

Monty begs Octavia not to kill Ilian but she won’t listen. Just then Jaha tells the guard to sound the alarm that black rain is coming. Everyone runs inside Kane is able to get Octavia to drop the gun. She runs out of the camp and they let Ilian go. Jaha declares, “from the ashes we shall rise.” The caravan makes it to the lab but Roan realizes one of the barrels of fuel is empty because it was hit by a Trecrew arrow. Raven has a seizure.