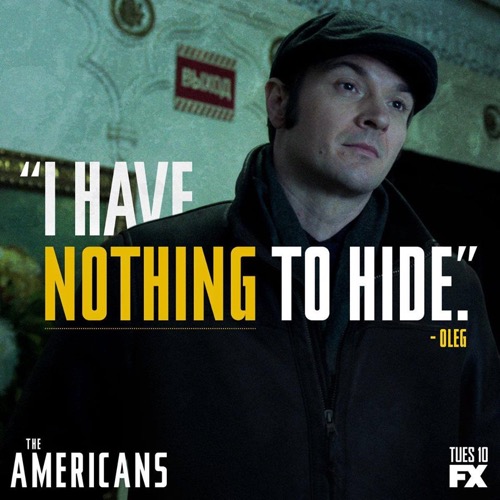 Tonight on FX The Americans airs with an all new Tuesday, May 2, 2017, episode and we have your The Americans recap below.  On tonight’s The Americans season 5 episode 9 called, “IHOP” as per the FX synopsis, “Philip and Elizabeth (Keri Russell) are thrown off balance when things with Tuan take an unexpected turn. Meanwhile, Henry makes a startling proposition and Stan has a disturbing encounter with Frank Gaad’s widow.”

Kinsey celebrates her 17th birthday. Elizabeth and Phillip talk about Henry’s report card and how much better his grades are then Paige’s. Dr. Tippens’ office calls to say Dr. Penderson will be covering for Dr. Tippens. Phillip is to see him Tuesday. Stan learns that KGB officers where in the country the same time as the murders. Elizabeth goes to Tuan’s house but he isn’t home. Phillip listens in on Stan.

Elizabeth calls Pasha to see if Tuan is there but he is not. It is very late and he is still not home so Elizabeth searches his room. She doesn’t find anything and he never returns home. She tells Phillip something doesn’t feel right. He tells her on the tape he heard that a group died of a hemorrhagic attack. It was the same virus they gave the CIA.

Phillip goes to the hospital to meet Dr. Penderson and he says Phillip needs to protect himself. Stan visits Frank’s widow and it is very awkward. He asks her if she knows anything about Bangkok. She tells Stan Frank would want revenge for his death. Elizabeth and Phillip talk to Henry and he asks if he can go to a boarding school in New Hampshire. He would leave in the fall.

Gabriel goes to see Martha. He asks how her Russian is coming. She wonders if her parents know where she is and he says no. He is retired now and Clark thinks of her often. She tells him to leave and to never come back. Tuan is being followed. Elizabeth and Phillip talk about Henry’s request and Elizabeth thinks they should let him go but Phillip does not. Tuan is spotted at the bus station and Elizabeth sees him board a bus bound for Harrisburg.

Oleg is questioned about his time in America. He met with Stan often. They talk about his relationship with Nina. The Russians want to know if he was angry about Nina’s death and tried to do something about it. He asks what he could have done. Oleg and his father talk about his mother’s time in a prison camp. Elizabeth finds Tuan but doesn’t speak to him. Oleg brings an apple to Dmitri in his cell. He threatens his wife and son and Dmitri gives him a name. Tuan returns home and Phillip and Elizabeth confront him. He says he goes out of state to talk to his parents because his brother is sick. He hasn’t turned on them. He begs them not to tell anyone. They don’t know if they can believe him.