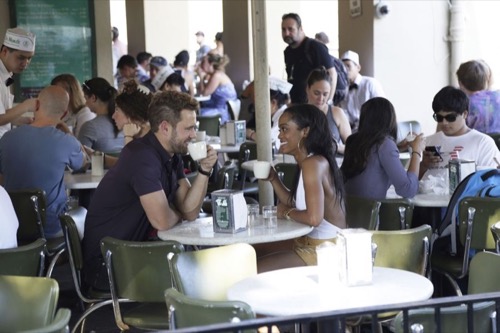 The Bachelor 2017 airs on ABC this evening with an all new Monday, January 30, 2017, season 21 episode 5 and we have your The Bachelor recap below. On tonight’s The Bachelor season 21 episode 5 as per the ABC synopsis, “The 13 remaining bachelorettes visit New Orleans, where Nick selects one lucky lady to accompany him on a date. Later, 10 women are chosen for a night of thrills at a haunted plantation; and two vengeful rivals go on the dreaded two-on-one date in the Big Easy’s mystical bayou, where the trio encounter a group of voodoo worshipers.”

Tonight’s episode of The Bachelor kicks off where we left off last week – the girls are all gathered with Nick Viall for a cocktail party before the rose ceremony.

Corinne and Taylor are sitting outside arguing, for a solid 10 minutes they bicker over who has more “emotional intelligence” and who has more friends in the house. Corinne rants that she’s sick of Taylor talking to her like she’s dumb and storms off.

Corinne corners Nick Viall and throws Taylor all the way under the bus. Corinne tells Nick that Taylor is on the show for the wrong reasons, she isn’t ready to get engaged, and Taylor is just plain mean and the girls in the house are sick of Taylor being rude to them. Corinne even calls Taylor “entitled” which is laughably the word everyone uses to describe Corinne…not Taylor.

After their chat, Nick seems thoroughly brainwashed by Corinne and thanks her for being so mature and honest with him. How did he even say that with a straight face? Corinne is on cloud nine, she’s certain that Taylor is not getting a rose.

The girls line up for the rose ceremony. Nick Viall passes out roses to Whitney, Danielle, Jasmine, Rachel, Jaimi, Josephine, Vanessa, Alexis, Corinne, and Taylor. Sarah and Astrid don’t get a rose and they are officially eliminated from The Bachelor.

After the emotional rose, tensions are still running high between the girls, Nick Viall tries to lighten the mood and announces that they are going to New Orleans.

The girls arrive in New Orleans and get settled in to their hotel. Chris Harrison arrives and drops a bomb on them – while they are in New Orleans, two girls will be going on a dreaded 2-on-1 date. Chris delivers the first date card, Rachel is invited on a 1-on-1 date with Nick.

Rachel and Nick head out on the town and hit the street market to taste test some authentic New Orleans food. Then, they join in on a New Orleans custom, a “First Line.” Nick and Rachel join a group of musicians and dance down the street with umbrellas. Little do they know, some of the girls can see them from the hotel room window and they’re devastated by how much fun Nick and Rachel are having together.

Rachel and Nick spend the night together having a romantic dinner and getting to know each other. Rachel fills him in on her family, and reveals that the last time that she was in New Orleans was for a funeral, and she vowed to live life to the fullest ever since.

Nick is clearly smitten by Rachel, he already has given her a group date rose and the first impression rose, he ends the night by giving her another date rose and praising her and how much fun he had with her today. Nick raves that Rachel is “the total package,” and the type of girl that he wants to be with for the rest of his life.

Back at the hotel room, the next date card arrives. Josephine, Kristina, Alexis, Raven, Jaimi, Vanessa, Danielle M, Whitney, Jasmine, and Danielle L are all invited on the group date. That means that Taylor and Corinne are the two girls that are going on the 2-on-1 date card, and one of them won’t be coming back to the hotel.

The next day, the girls meet up with Nick Viall for their group date. The card teased, “Til Death Do Us Part,” and the girls have no idea what they are in for. Nick takes the women to one of the most haunted houses in all of Louisiana. On the exterior, the huge white mansion looks harmless, but who knows what is waiting for them inside?

They kick off the group date with some drinks, prepared by the host of Houmas House, a very animated guy named Boo. He teases the girls and tells them that the walls talk. Some of the girls are already creeped out by Boo, he’s a little eccentric.

Boo gives them a tour of the mansion, and tells them that there is a little ghost that roams the hall named May, and she is 8 years old. After it gets dark, they decide to have a séance in the house and play with an Ouija board. Of course, things get spooky and the lights go out and a chandelier falls on the floor.
Nick heads outside with Danielle L for some alone time while the girls continue to wander through the house with candles and get scared out of their minds.

Back at the hotel, Corinne and Taylor are spending the night prepping themselves for their big day tomorrow. Taylor does some yoga and breaks out her essential oils. Meanwhile, Corinne pops some champagne in a bubble bath and then orders some steak. Their 2-on-1 date card arrives and they learn that their date tomorrow will be in the bayou.

At the haunted house, it’s been a long and interesting night, and it’s time for Nick to pass out the group date rose. After careful consideration and some alone time with each of the girls, Nick passes the rose out to Danielle M. Of course, there are some disgruntled girls, especially Raven who just revealed to Nick that she is falling in love with him.

It’s time for Corinne and Taylor’s highly anticipated 2-on-1 date. The girls head to the bayou where Nick is waiting for them in a boat. They take an awkward trip through the swamp and alligators. Nick and the girls finally reach their destination, and after hiking through the woods, Nick has a surprise for them. He has set up tarot card readings and a truth ceremony.

While Taylor is getting her tarot card reading, Nick and Corinne go for a walk. Corinne whines to Nick that Taylor is an evil person and she has been bullying her in the house and even called her “stupid.”

Taylor is a bit taken aback when Nick confronts her about bullying Corinne. Taylor snarks that she never used the word stupid, but she does think that it is pretty concerning that Corinne doesn’t know what the word “emotional intelligence” even means. While Nick is talking to Taylor, Corinne learns how to make a voodoo doll, because the world is totally a safer place with Corinne running around with voodoo dolls.

Afterwards, Taylor is livid with Corinne. She accuses her of lying to Nick and twisting her words. Nick arrives, and it is time for him to pass out the date rose. Whoever doesn’t receive the rose will be going home.
Nick sits down with Corinne and Taylor and explains that he has decided to give the rose to Corinne because he feels a stronger emotional connection to her. Taylor is obviously furious and barely even says goodbye to Nick before he and Corinne hop in the boat and head back to the hotel together and have a romantic dinner.

Little do Corinne and Nick know, Taylor isn’t going home without speaking her mind and telling Nick who Corinne really is. She marches back in to the hotel and interrupts Taylor and Corinne’s date and announces that she needs to talk to Nick ASAP. To Be Continued …