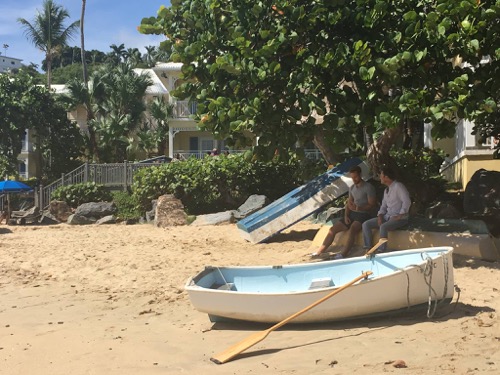 The Bachelor 2017 airs on ABC this evening with an all new Monday, February 13, 2017, season 21 episode 7 and we have your The Bachelor recap below. On tonight’s The Bachelor season 21 episode 7 as per the ABC synopsis, “All of Nick’s relationships are called into question as the remaining women deal with Nick’s admission that the process may not be working for him. Nick seeks council from Chris Harrison about his predicament.”

Tonight’s episode of The Bachelor kicks off where we left off last week – Nick Viall just sent home 3 girls unexpectedly, and then had a major meltdown and revealed that he is having second thoughts about being on the show.

After Nick’s meltdown, the remaining girls wake up bright and early in the Virgin Islands, they’re all scared that Nick is walking away from the show and he won’t choose any of them.

Meanwhile, Chris Harrison sits down with Nick on the beach to discuss last night’s events. Nick reveals that he is scared his relationships with the girls will fizzle out just like his relationship with Danielle did. Nick confesses that he is considering quitting the show and walking away.

Nick pays the girls a visit in their hotel room. He admits that he’s upset about sending Danielle home, but he sent her home because his relationship with her isn’t half as strong as it is with the girls left. Nick did a lot of thinking and decided that he is going to stay on the show and continue the journey with the final six. Since Nick sent home half the cast last week, they are going to skip the rose ceremony and head to their next location, Bimini.

The girls check in to their villa in Bimini, and the first date card arrives. It’s a 1-on-1 date, and Vanessa Grimaldi is the lucky girl. The date card teases, “Let’s get deeper.” Vanessa is thrilled, the other girls…not so much. Corinne is freaking out, the last thing she wants is Nick and Vanessa “getting deeper.”

Vanessa heads off on her date with Nick, and he surprises her with a yacht. While they are off on the ocean, Corinne is back at the hotel ranting about Vanessa. Now that Taylor is gone, Vanessa seems to be her new competition.

At the hotel, the next date card arrives. All of the girls are certain that they are getting a 1-on-1 date. But, it’s a group date card. Corinne, Raven, and Kristina are all going on the group date. Corinne is determined to get a group date rose so she can be sure that she gets a hometown date next week.

After an afternoon of scuba diving off from the yacht, Vanessa and Nick head back to land and settle down for a romantic dinner. Vanessa and Nick chat about hometown dates, she can’t wait for Nick to meet her family. She gets emotional, and confesses to Nick that she is falling in love with him.

Nick gives her a long-winded response about falling in love on the show, and doesn’t really confirm or deny his feelings for her. Vanessa doesn’t know how to take his answer – but the date definitely takes an awkward turn and she’s feeling discouraged.

The next day, Corinne, Kristina, and Raven head out on their group date with Nick. They board a boat and hit the ocean, Corinne’s jealous because Nick is focusing all of his attention on Kristina and not her. Nick surprises the girls and announces that he has arranged for them to swim with the sharks. Corinne and Raven are all for it, but after a few minutes in the water, Kristina begins crying and gets back on the boat. To Corinne’s dismay, Nick gets back on the boat to comfort Kristina.

After their day on the ocean, Nick and the girls have some drinks together. He spends some alone time with each of the girls, Corinne is certain that she is going to get the date rose at the end of the night. Nick surprises everyone and gives the group date rose to Raven. It looks like she is officially going to hometown dates. Nick sends Corinne and Kristina back to the hotel, and he and Raven head out for a night cap. Nick surprises her with a concert on the beach and they share a romantic dance.

The next day, Nick heads out on another 1-on-1 date with Danielle. The date gets off to an awkward and slow start. It’s apparently such a snoozefest that they only air about 5 minutes of it on the show. At the end of the date, Nick and Danielle sit down for a romantic dinner. Danielle professes her love to Nick at the dinner table, then Nick realizes that he doesn’t feel the same way about her.

Nick blindsides Danielle and tells her that he doesn’t see their relationship going any farther, and he sends her home. Danielle heads back to the hotel and packs her bags and shares an emotional goodbye with the other girls. While everyone is devastated that Danielle is leaving, Corinne begins plotting ways to ensure that she doesn’t get sent home and makes it to hometown dates.

Corinne sneaks out of the hotel room and visits Nick in his hotel room. They sit down and have drinks, Corinne jokes that she just wanted her 1-on-1 time since she didn’t get any. Corinne convinces Nick to go in his room with her, where the cameras can’t see them, but their mics are still on. Apparently, Nick learned his lesson after he hooked up with Kaitlyn, and he shuts Corinne down when she tries to unzip his pants.

Corinne is obviously upset, and feels totally shot down, she takes the walk of shame back to her hotel room. Her plan totally backfired. She was trying to ensure that she got a rose, but now she is scared that she totally blew it and won’t get one at all.

In the morning, Nick picks Rachel up for a short 1-on-1 date before the rose ceremony. They spend the afternoon hanging out at a local bar in Bimini and chatting about Rachel’s family and how excited she is for hometown dates.

At the hotel, the girls are getting ready for the rose ceremony. Everyone is nervous, then Nick Viall barges in and asks Kristina if they can talk in private. Everyone begins panicking and trying to figure out what Nick and Kristina are talking about.

Outside, Nick has a heart to heart with Kristina. Nick gets choked up, and Kristina can tell that he is getting ready to send her home. Nick explains that he has stronger relationships with the other girls, and he doesn’t want to keep stringing Kristina along. Kristina seems to hold it together, but Nick starts crying. They say their goodbyes and Kristina heads inside to pack her bags and leave. It looks like Nick skipped another rose ceremony. The final four remain: Raven, Corinne, Rachel, and Vanessa.