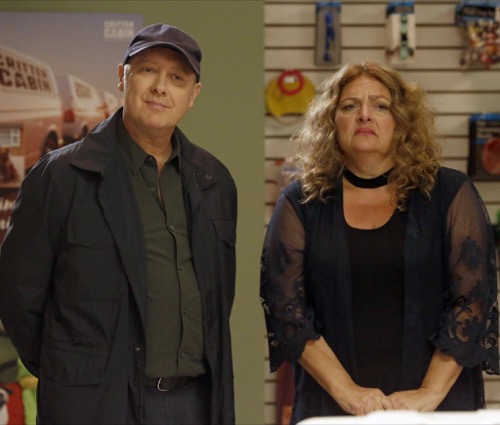 Tonight on NBC their hit drama The Blacklist starring James Spader airs with an all-new Thursday,  October 25, 2017, episode and we have your The Blacklist recap below. On tonight’s Blacklist Season 5 episode 5 called, “Ilyas Surkov,” as per the ABC synopsis, “When Red provides exclusive intel on an international terrorist, it puts Liz and the Task Force on a collision course with a rival unit from the CIA. Meanwhile, Red and Hawkins lay the groundwork for their new business venture; and Tom goes undercover in search of information.”

Tonight’s episode of The Blacklist kicks off with a woman at home on a summer day, her son Ethan begins yelling that it is snowing and runs outside and dances in the “snowflakes.” The adults make a startling discovery, the snow is actually ash, they rush the kids inside.

Elizabeth leaves a crime scene, distraught. She rushes home and tells Tom that Nick is dead – they found him strangled. Liz is convinced that Reddington is responsible.

At the FBI, they are investigating a bombing, the one that created snowflakes. They believe an international terrorist named Ilyas Surkov is responsible. Elizabeth and Ressler head to the explosion site, they meet with a member of MI-6 who is also working the case. They learn that a demolitionist named Raqqan Ghaffari is working for Surkov and may be able to lead them to him.

Agent Navabi goes undercover and meets with Raqqan, she convinces him to get her in contact with Surkov.

Meanwhile, Tom is at home with baby Agnes. He knows that the body he had Nick ID that he got from Kaplan is what got him killed. And, he is certain that Reddington is responsible. Tom decides to go undercover at a clinic where Nick and McGee were working to try and get more information.
Reddington is up to his old tricks. He corners a clerk from the evidence building and kidnaps his dog. He tells the clerk that he can have his dog back after he gets him some evidence that was just checked in.

Navabi leaves her top-secret meeting with Raqqan, as she walks out of the building men grab her and Raqqan and throw her in to a white van and speed off. Ressler and Aram chase after the van. They finally pull over and everyone draws their guns, it turns out that the men that kidnapped Navabi are CIA agents.
Tom arrives at the clinic with a fake ID and announces that he wants to volunteer for their clinical research. While he’s waiting to be injected with experimental drugs, he chats up the nurse.

The CIA agents are interrogating Raqqan, trying to get intel on Surkov. Elizabeth waits outside of the room and listens to the CIA officer trying to beat the truth out of him. She learns that the CIA team has been chasing Surkov for almost 6 years and have given up their entire lives to try and catch the international terrorist.

Red’s new criminal safe house business is flourishing. But, now he needs a front to ward off the IRS. He decides to start a non-profit dog grooming business and adoption agency for pups. Tom takes out the

Tom takes out the IV and stumbles through the clinic. He finds McGee’s office and begins rifling through his files and personal belongings.
Elizabeth and Navabi intervene with the CIA’s interrogations and get Raqqan to sing like a canary. Raqqan reveals that Surkov specifically ordered him to construct a bomb that could penetrate 3.5 centimeters of keflan.

While Raqqan is talking, Elizabeth gets a phone call from Harold. He warns her that the group that kidnapped Raqqan is not CIA, he spoke to his CIA contact and they have no idea what he is talking about. Elizabeth hangs up and before she can confront the CIA imposters, a shootout ensues. Elizabeth manages to capture the one female in the group.

The FBI has intel that Surkov is dead, and the bomb that Surkov supposedly ordered is going to be set off by a copycat bomber. Elizabeth believes that Reuther, the leader of the fake CIA agents is the copycat bomber. She interrogates the woman she captures, but she insists that Reuther recruited her for his CIA taskforce.
At the FBI, they learn that Reuther is actually a former agent named Brian Osterman. He cut ties with the CIA in 2008, and “went dark.” Reuther’s former partner is shocked when she learns that the CIA team was all a ruse, she agrees to take the FBI to their safe house and help them capture Reuther. Unfortunately, Reuther beat them there and scrubbed the house clean of any info they can use.

Back at FBI headquarters, Aram works his magic and comes up with a location that he thinks is Reuther/fake Surkov’s next target, a US ship located in West Virginia. Ressler and the team rush to the ship and are met by NCIS.

Elizabeth rushes to the site and finds Reuther on a building with a sniper gun pointed at the ship. Reuther begins rambling that the CIA officer he was answering to is dirty, Cox. Apparently, Cox kicked him out of the CIA for fear of being exposed.

Reuther says that Cox is the one that is blowing up the ship, and he is trying to stop it. Reuther is certain that one of Cox men is planting the bomb on the ship. Reuther refuses to put the gun down, so she shoots him in the arm. Elizabeth handcuffs Reuther and is shocked when the bomb goes off, it looks like Reuther was telling the truth after all.

An angry Harold confronts Cox back at the office. Cox admits that the CIA has been setting off bombs and pinning them on Surkov, but insists that every bomb is for the greater good of the country. Supposedly the bomb on the ship was to destroy an underwater cable that was carrying Chinese intel. Harold doesn’t want to hear it, what Cox has been doing is unacceptable, and he vows to report him to the proper authorities.

After work, Elizabeth heads to the cemetery and meets up with Reddington for Nick’s funeral. She confesses that Nick’s death is hitting her hard. She asks Red if he was able to find any information about how Nick died, he promises to he has a lead. Tom shows up to the cemetery and comforts Liz. The next day, Tom meets up with McGee’s girlfriend to try and find him and the missing body from Kaplan.

Tonight’s episode ends with Tom getting a phone call. It’s from Reddington. He got the number off from Nick’s phone in the evidence room. Now, Red knows that Tom was working with Nick behind his back.