The Bold and the Beautiful Spoilers: Comings and Goings – Casting News – Reactions To Major Role Recast 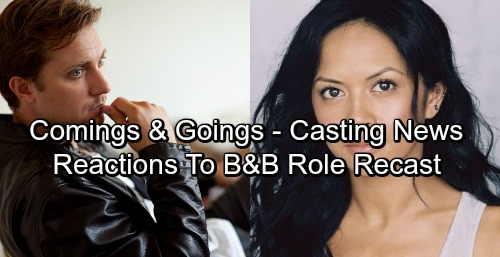 The Bold and the Beautiful (B&B) spoilers for the week of October 9 reveal information on comings and goings. Keep reading to get the latest casting news for the ABC soap. On Monday, October 9, fans will meet three architects. They will be portrayed by Maxfield Lund, Amielynn Abellera (first two stars pictured above) and Kamal Khan.

Now for the major B&B casting news. The Bold and the Beautiful spoilers confirm that Ingo Rademacher is joining the soap. Known for his role on General Hospital as Jasper Jacks, Rademacher will portray Eric Forrester’s (John McCook) son, Thorne Forrester.

There is one character that is making an exit. Fans said goodbye to Windsor Harmon III. He played Thorne Forrester on and off since 1996. It was a surprise casting move that created a reaction from fans. The actor reached out to viewers on social media to ask that they give his replacement a chance.

“We’ve been friends for a long time. He’s a great guy. I just everyone to give him a chance!! He will be a great, very talented actor!”

“Just spoke with Brad Bell and at this time he’s decided to RECAST THORNE. I wish the new actor and the show continued success.”

B&B spoilers reveal that fans are not the only ones talking about Harmon’s exit. Katherine Kelly Lang, who plays Brooke, said some words about it on social media.

“Thinking of all the fabulous years with u [sic] Windsor Dewey Harmon III on The Bold and the Beautiful! U [sic] will always be our dear friend! Can’t wait to see what you will do next!”

John McCook also chimed in and said a heartfelt farewell to the actor.

What do you think of the B&B comings and goings? Keep watching the CBS soap and check back often with CDL for the latest in The Bold and the Beautiful spoilers, updates and news.