The Bold and the Beautiful Spoilers: Eric Learns the Truth, Ridge Fired as Co-CEO 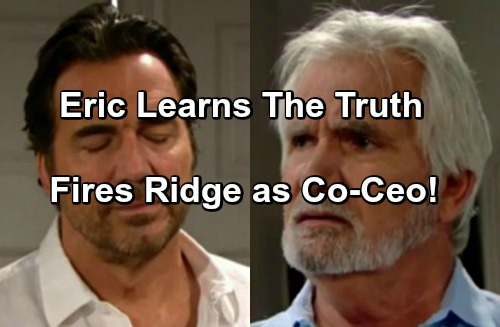 The Bold and the Beautiful (B&B) spoilers tease that Ridge (Thorsten Kaye) and Quinn (Rena Sofer) will struggle to keep their secret. Brooke (Katherine Kelly Lang) and Katie (Heather Tom) could blurt out the truth at any moment. Either one of them could fill Eric (John McCook) in on the crushing betrayals.

Ivy (Ashleigh Brewer) will probably put everything together once she hears the wedding is off. She’s definitely a threat as well. Even Charlie (Dick Christie) could pick up his search for answers in light of the failed nuptials. 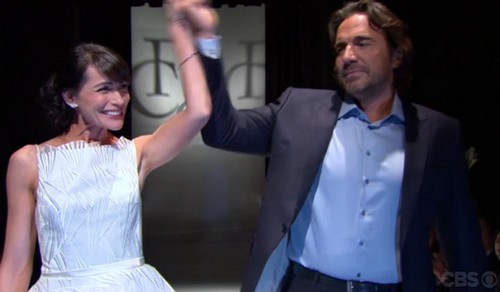 It’s clear that Ridge and Quinn have a huge problem, but The Bold and the Beautiful spoilers claim they have at least one thing working in their favor. Eric’s loved ones don’t want to blow up his life. They’ll be worried about how the cheating news could affect his health. Eric’s state of bliss is also a factor. He hasn’t been this happy in a long time and no one really wants to rob him of that.

Nevertheless, almost every B&B secret is revealed sooner or later. Eric will find out what happened eventually and Ridge will pay the price! The Bold and the Beautiful fans can expect some explosive drama. It seems like a no-brainer that Eric will demote Ridge. He can’t let his lying scoundrel of a son remain in the co-CEO spot. 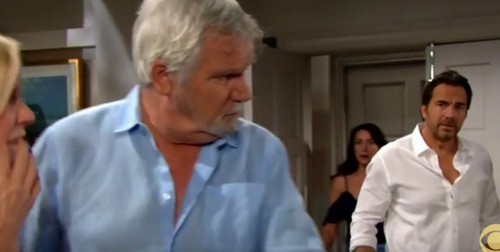 Eric might even toss Ridge out of Forrester Creations entirely. Whatever the case, Steffy (Jacqueline MacInnes Wood) would be left as the sole CEO. She might like that idea, but Eric could insist that two heads are better than one. Perhaps Steffy will get a new partner at the top.

Rick (Jacob Young) and Thomas (Pierson Fode) have both made their desires known. They would love a chance to run the company in any way, shape or form. Of course, there would be major backlash no matter who Eric picked – that’s how it is with ambitious and greedy people. 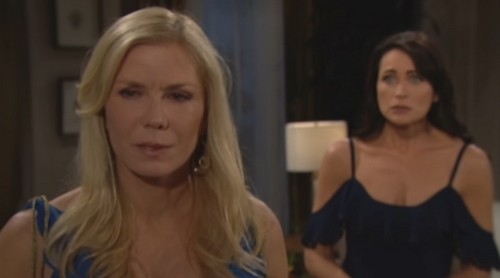 Thomas is seemingly the angriest about being snubbed. The Bold and the Beautiful spoilers say that if he gets passed over again, his pride probably won’t let him stick around. Thomas might end up at Spectra Fashions with Sally (Courtney Hope). They could become a new power couple and compete with Forrester Creations.

However, Rick’s head will likely explode if he gets ignored once more. He could sabotage those he deems unworthy of the throne. B&B fans would like to see Rick take down Thomas and Steffy for selfish gain.

What would you like to see on The Bold and the Beautiful? Should Eric kick Ridge to the curb? Would Thomas or Rick be the best fit as Steffy’s co-CEO? We’ll give you updates as other details emerge. Stay tuned to B&B and don’t forget to check CDL often for the latest Bold and the Beautiful spoilers, updates and news. Come and join the conversation on our Bold and Beautiful Facebook Group!