BY Heather Hughes on November 16, 2017 | Comments: one comment
Related : Soap Opera, Spoiler, Television, The Bold and the Beautiful 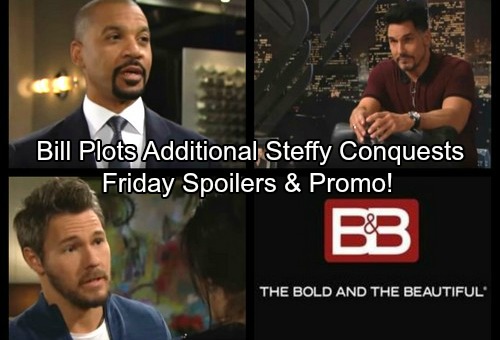 The Bold and the Beautiful (B&B) spoilers for Friday, November 17, tease that Steffy (Jacqueline MacInnes Wood) will struggle to get a grip on her emotions. She woke up in horror after sleeping with Bill (Don Diamont) and she’s been a mess ever since. Steffy will continue to blurt out apologies for how she treated Liam (Scott Clifton), but he’ll promise everything’s fine.

Of course, that should make Steffy’s guilt even worse. She’ll be ashamed of her actions, but she wouldn’t dare tell Liam. Steffy understands what a blow this would be. Instead, she’ll talk about regrets and wonder if they can really move on. Liam will assure Steffy that it’s possible. He’ll contend that they can get past this. In fact, he’ll think he has a strategy to make that happen.

Liam contacted Carter (Lawrence Saint-Victor) on Thursday. He has a surprise in store for Steffy and he needs Carter’s help with it. The Bold and the Beautiful spoilers suggest that Liam may want to renew his vows with Steffy. It sounds like Steffy will pretty much sob her way through Friday’s episode!

Meanwhile, Bill will feel hope for the future. Steffy was mortified by her sex session with Bill, but he seemed satisfied. Bill may have a hint of guilt deep down, but he can ignore it if it means being with Steffy. B&B spoilers say Bill will definitely be interested in more hot encounters.

Justin (Aaron D. Spears) will listen to Bill’s instructions and agree to carry them out. He’ll learn that Bill wants his luxurious yacht, the Stella Maris, stocked and ready. Justin will wonder how many people he should prepare for. He’ll flash a smile as he awaits the expected number. Bill will declare that it’s for a party of two.

It’s possible Bill will surprise us by setting up a romantic evening for Liam and Steffy. He could see that Steffy regretted going to bed with him. However, it seems more likely that Bill plans on another steamy night. Now that he’s had a taste of Steffy, there’s no going back.

Other Bold and the Beautiful spoilers say Katie (Heather Tom) and Wyatt (Darin Brooks) will spice things up in the bedroom. They’ll do some role-playing as they work to keep their romance interesting. We’ll give you updates as other B&B news comes in. Stay tuned to the CBS soap and don’t forget to check CDL often for the latest Bold and the Beautiful spoilers, updates and news.