The Bold and the Beautiful Spoilers: Hope Recast Clues Emerge – B&B Gears Up for Huge Comeback

BY Marcy Cohen on November 14, 2017 | Comments: one comment
Related : Soap Opera, Spoiler, Television, The Bold and the Beautiful 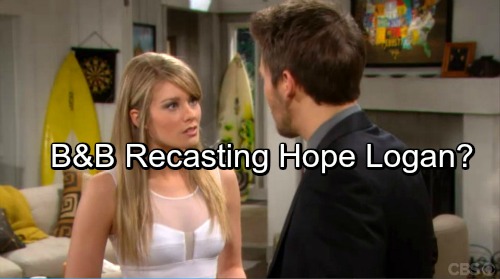 The Bold and the Beautiful (B&B) spoilers tease that the CBS soap could be gearing up for a big comeback. Bradley Bell, B&B’s head writer and executive producer, recently did an interview with TV Insider. Bell revealed that he didn’t have plans to recast Thomas (Pierson Fode) or Zende (Rome Flynn) yet, but he admitted “we might see some favorites from the past.”

Bell added that casting was in progress, so let’s put those clues together. If Bell’s possibly bringing back fan favorites and they’re going through the casting process, that means some recasts may be in the works. Soap Central also tweeted out a blind item that points in this direction. They suggested that one of the four soaps is recasting a major role that’s been MIA for a few years.

If that tweet is referring to The Bold and the Beautiful, Hope Logan might be a good option. Kim Matula made her official departure at the end of 2014. She’s made a handful of popup appearances since then, but she doesn’t seem interested in a full-time return to the show. B&B may want another actress to step in right about now.

It’s clear that B&B likes to keep Liam (Scott Clifton) front and center. Steffy (Jacqueline MacInnes Wood) is always a key player as well. They’ve been a popular couple, but soap relationships rarely last forever. Steffy and Liam are going through a rough patch and it’s only going to get worse. The Bold and the Beautiful spoilers say Bill (Don Diamont) and Steffy’s betrayal will leave Liam in a dark place.

Could Hope come back and lift Liam out of that darkness? This would be the perfect opportunity to set up another love triangle. Bell loves to write those, so we can always count on them. Steffy and Hope might end up revisiting their war for Liam.

Of course, there’s a chance Katie (Heather Tom) could have some competition for Wyatt’s (Darin Brooks) heart. The Spencer brothers were quite smitten with Hope, so it’d be interesting to see what they’d do if she came back in the picture. Hope’s return would definitely bring serious drama!

Would you like to see Hope again, even if a new actress is in the role? Do you think Hope is needed on canvas? We’ll give you updates as other B&B news comes in. Stay tuned to the CBS soap and don’t forget to check CDL often for the latest Bold and the Beautiful spoilers, updates and news.