The Bold and the Beautiful Spoilers: Liam Forced to Use Secret Weapon, Delivers a Shocker Bill Will Never See Coming 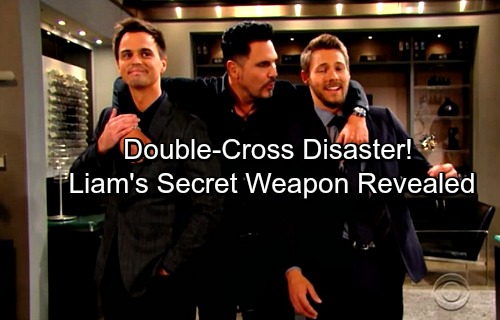 The Bold and the Beautiful (B&B) spoilers tease that Brooke (Katherine Kelly Lang) will have doubts about her divorce next week. Bill would welcome the repair of his marriage, but it looks like Brooke may not have his whole heart anymore. The ordeal with Liam led to Bill and Steffy’s (Jacqueline MacInnes Wood) reconnection.

Bill’s been making sure Steffy knows what an incredible woman she is. It’s clear that something’s brewing between them. When Bill made amends with Liam (Scott Clifton), he offered an intriguing warning. Bill suggested that there would be trouble if Liam didn’t treat Steffy right. The bond Steffy and Bill have established will be tough to break. In fact, it’s only going to grow stronger from here.

Meanwhile, Sally (Courtney Hope) will try to inch her way into Liam’s heart. With Shirley’s (Patrika Darbo) guidance, Sally might make some progress. Bill seemed genuinely interested in fixing his relationship with Liam. However, Bill has proven that he’s willing to follow his heart into dangerous territory. He may be waiting for Liam to mess up so he can swoop in and take what he wants.

Bill might even work behind the scenes to move Liam and Sally’s romance along. If they cheat, Bill may take that as a free pass to cheat with Steffy. If Brooke gets hurt, then so be it. Bill won’t care in that moment. B&B fans know he’s a passionate man with impulsive tendencies.

Of course, Bill may not want to underestimate Liam. The Bold and the Beautiful spoilers hint that the Spencer war could be reignited with terrible consequences. How can Bill be certain he deleted all copies of the recording? This isn’t Liam’s first rodeo with his sneaky father. He must’ve known Bill would try to get rid of the evidence.

If you were in Liam’s position, wouldn’t you keep a secret copy tucked away somewhere? Liam could easily be playing Bill right now. He’s going along with this peace idea, but it’d be wise to have a backup plan.

Let’s say Sally kisses Liam and he turns her away. Bill could easily turn that into a much bigger deal, especially with a well placed camera and doctored photo. He could relay the news to Steffy and comfort her all the way into the bedroom. Bill could be setting himself up for a huge fall. If he dares to make his move with Steffy, Liam could pull off a true shocker.