The Bold and the Beautiful Spoilers: Mateo Spills All to Quinn – Sheila’s Accusations Infuriate Eric – Liam Takes Sally’s Side 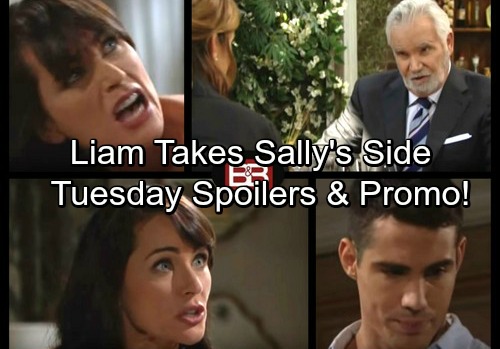 The Bold and the Beautiful (B&B) spoilers for Tuesday, October 24, tease that Sheila (Kimberlin Brown) will try to stir up some doubts for Eric (John McCook). She’ll insist that Quinn (Rena Sofer) cheated once and she’ll do it again. Sheila will point out that Mateo (Francisco San Martin) and Quinn are getting awfully close. She’ll urge Eric to open his eyes and see what’s right in front of him.

Eric will refuse to let Sheila disparage his wife. He’ll contend that Sheila needs to butt out and worry about her own business. The Bold and the Beautiful spoilers say Eric will talk about how hard Quinn’s worked to prove herself. He’ll declare that he’s forgiven Quinn completely.

Sheila will be frustrated by Eric’s loyalty, but she won’t lose hope. She’ll be certain that her plan will pay off soon enough. However, Sheila doesn’t realize that things are already falling apart at the Forrester mansion. Mateo will find himself in a tricky position on Tuesday’s B&B episode.

Quinn will shout at Mateo for crossing the line during her massage. She’ll note that the Mateo was promoted because Eric trusted him. In an effort to keep his job, Mateo will spill everything. He’ll reveal that this was all Sheila’s twisted idea. Mateo will want Quinn to understand that he just needed the money. He didn’t want to destroy Quinn’s marriage, but Sheila was putting a lot of pressure of him.

It sounds like Mateo will find himself unemployed anyway. The Bold and the Beautiful spoilers say Quinn will yell that Mateo’s fired. She’ll turn her attention to Sheila and how she’s going to handle this growing threat. Sheila stooped pretty low, but Quinn will believe she can stoop even lower. This battle is heating up and the fallout is going to be ugly! 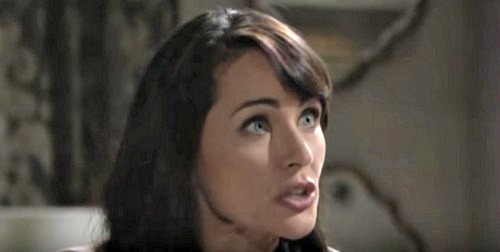 Elsewhere, Liam (Scott Clifton) will dismiss Steffy’s (Jacqueline MacInnes Wood) request. She’ll ask him to stop offering Sally (Courtney Hope) assistance, but Liam just won’t be willing to do that. B&B spoilers say Sally will continue to be a big issue for this couple.

Steffy and Liam’s relationship could be in jeopardy down the road. We’ll give you updates as other news comes in. Stay tuned to the CBS soap and don’t forget to check CDL often for the latest Bold and the Beautiful spoilers, updates and news.