BY Heather Hughes on December 8, 2017 | Comments: one comment
Related : Soap Opera, Spoiler, Television, The Bold and the Beautiful 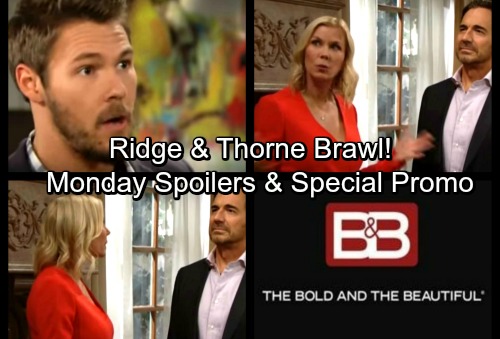 The Bold and the Beautiful (B&B) spoilers for Monday, December 11, tease that Brooke (Katherine Kelly Lang) will try to help Thorne (Ingo Rademacher) and Ridge (Thorsten Kaye) get along. She’ll urge them to show some maturity and deal with their issues without violence. Thorne already got a little aggressive with Ridge, but Brooke will hope she can prevent another incident.

Ridge and Thorne won’t be interested in attempting to understand each other. They can barely handle being in the same room together. The Bold and the Beautiful spoilers say Brooke will wonder why they can’t see what she sees. She’ll contend that they’re both great men with big dreams. Brooke will think they should aid each other’s goals instead of creating drama. 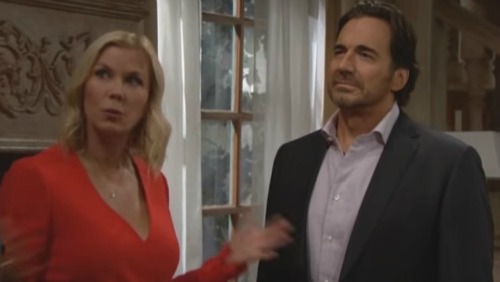 Unfortunately, Brooke won’t make any progress with these hostile brothers. B&B fans can expect the tension to erupt once again. It looks like a full-on brawl will break out, but Brooke will do her best to get it under control. She might argue that if they can’t make peace, they need to at least leave each other alone. It’d be better than hurling insults and causing injuries.

While Brooke tackles that crisis, Steffy (Jacqueline MacInnes Wood) will face one of her own. The Bold and the Beautiful spoilers state that Liam (Scott Clifton) will push for some answers. He knows Steffy lied about where she was the night they fought. What he doesn’t know is why. Liam will just want Steffy to come clean about what really happened and enlighten him on the reason for her fib.

When Steffy admits she stayed at the guesthouse, Liam will point out that she’s given him two stories. He’ll encourage Steffy to tell him the real one and she’ll undoubtedly reiterate that Quinn (Rena Sofer) was right. The Bold and the Beautiful spoilers say Steffy will try to offer a satisfactory explanation. She’ll hope to spin a tale that makes sense to Liam.

Steffy might lie that she was distraught and can barely even remember that evening. Then again, she could suggest that she just felt bad about abandoning Liam over something so small. Whatever the case, Liam will end up feeling like the guilty party in all of this.

Steffy will hate herself for making Liam out to be the loser, but she has no choice. There’s no way she can blab about sex with Bill (Don Diamont). We’ll give you updates as other B&B news comes in. Stick with the CBS soap and don’t forget to check CDL often for the latest Bold and the Beautiful spoilers, updates and news.