BY Heather Hughes on November 19, 2017 | Comments: one comment
Related : Soap Opera, Spoiler, Television, The Bold and the Beautiful 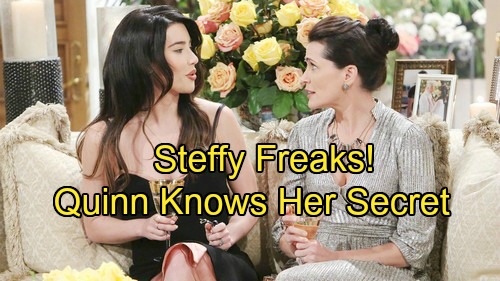 The Bold and the Beautiful (B&B) spoilers tease that Steffy (Jacqueline MacInnes Wood) is in for a rough Thanksgiving. She’ll do her best to hide her secret with Bill (Don Diamont), but Quinn (Rena Sofer) won’t make it easy. For starters, Quinn will seat Bill and Steffy next to each other at the dinner table. They’ll share some awkward moments, but Steffy will just try to focus on Liam (Scott Clifton).

Unfortunately, Quinn will make things worse a little later. During a private conversation, Quinn will suggest that she knows Steffy’s secret. The Bold and the Beautiful spoilers say Steffy will start to panic. She might pretend she doesn’t know what Quinn’s talking about, but the Forrester matriarch will insist that she’s in the loop. 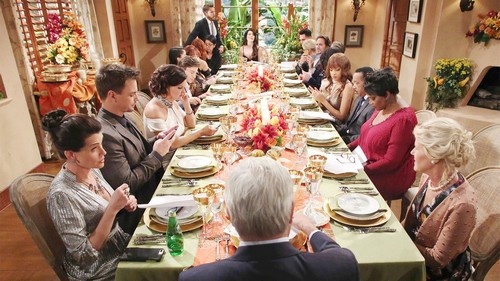 Steffy could easily start panicking here. She might beg Quinn to stay quiet for Liam’s sake. Steffy will certainly be a nervous wreck over Quinn’s claims. However, Steffy is undoubtedly worried over nothing. Quinn may point out that Steffy’s watch was found at the guesthouse. The secret she’s referring to is probably the fact that Liam and Steffy are having problems.

Once Steffy discovers this was a false alarm, she’ll breathe a huge sigh of relief. Steffy will assure Quinn that they’re all good now. Liam and Steffy renewed their vows, so they’re working on moving forward. Still, Quinn may pick up on Steffy’s weird behavior. She may sense that Steffy’s keeping a lid on something much bigger. 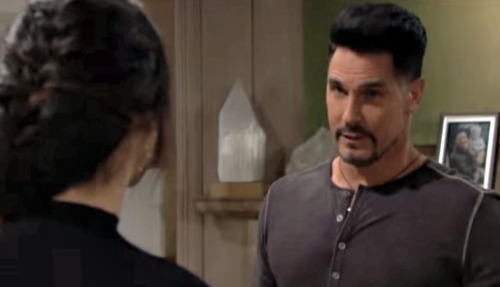 B&B fans know how Quinn can be when she gets an idea in her head. Now that Sheila’s (Kimberlin Brown) backed off, Quinn will need something to keep her busy. Perhaps Quinn will use this as her latest project. Curiosity could get the best of her, especially if Quinn thinks there’s something that could break up Liam and Steffy.

Quinn may still think Steffy could be an option for Wyatt (Darin Brooks). She definitely doesn’t want him with Katie (Heather Tom), so there’d be some motivation to dig up dirt. Quinn may not be turning back to the dark side right now, but she’ll never lose her sneakiness entirely.