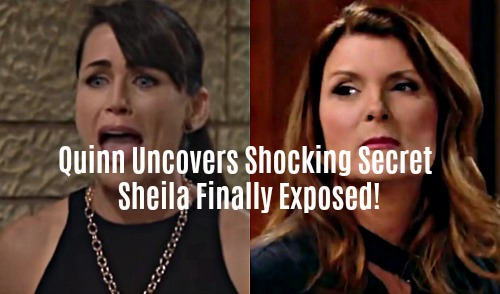 The Bold and the Beautiful (B&B) spoilers tease that Quinn (Rena Sofer) will fume as her enemy lurks. Sheila (Kimberlin Brown) will do her best to slither her way into Eric’s (John McCook) heart. She’ll make it clear that she’s not walking away from this battle. Quinn hoped she could get rid of this threat before it became a real problem. Since that’s not happening, Quinn will have to shift her strategy.

Sheila isn’t someone Quinn should take lightly. Despite Sheila’s monstrous past, Eric has softened toward her considerably. Quinn’s betrayal gave Sheila an opening and now the damage is done. If Quinn wants to defeat her rival, she’ll have to accept the challenge and get sneaky. Anger will only get Quinn so far. She needs to channel that raging energy into a ruthlesss plan to bring Sheila down. 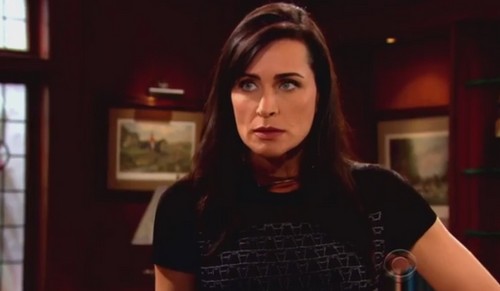 Quinn can’t go overboard, but she needs to tap into her inner crazy just a bit. She has to beat Sheila at her own game! The Bold and the Beautiful spoilers suggest that Quinn will soon be off to a nice start. After she does some digging next week, Quinn will learn a secret Sheila has been hiding.

What will Quinn become privy to? Will she find out about Sheila’s blackmail plot? Since Sheila has major dirt on James (Ian Buchanan), he’s been forced to go along with her wishes. That’s something Eric would obviously want to know.

However, there might be something that keeps Quinn from revealing that news. James might beg her to stay quiet for the sake of his career. Quinn could also decide she needs solid evidence before she takes anything to Eric.

The Bold and the Beautiful loves to use videos and security footage in their storylines. Could Quinn try to record this vicious side of Sheila? Will she provoke her in hopes of getting a reaction on tape?

That plan could go horribly wrong if Sheila behaves violently and later erases the footage. She could turn this all around on Quinn. If Sheila pushes too hard, she may bring out the wild side of Quinn we’ve been waiting for. This B&B war is sure to come with many more epic outbursts.

What drastic action could Quinn ultimately take? Will Sheila drive Quinn to the edge? Is a murder plot brewing? We’ll give you updates as other B&B details emerge. Stick with the CBS soap and don’t forget to check CDL often for the latest Bold and the Beautiful spoilers, updates and news.