The Bold and the Beautiful Spoilers: Wednesday, August 23 – Sally’s Preview Has a Fiery Conclusion, Liam Saves the Day 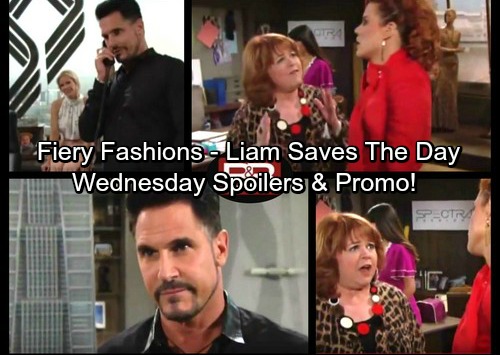 The Bold and the Beautiful (B&B) spoilers for Wednesday, August 23, tease that Bill (Don Diamont) will call Jarrett (Andrew Collins) to his office before the Spectra preview. He’ll hope to get a few things straight about how the company’s going to be portrayed. It’s clear that Bill has big plans, but he has to take down Spectra Fashions first.

Naturally, Bill wants to tarnish Spectra’s reputation and make them look like a joke in the fashion industry. He’ll want Jarrett to follow his orders, but he’ll definitely get some resistance. Liam (Scott Clifton) will also be attending this event, so Jarrett will have someone else in his corner. They’ll do whatever they can to shift Bill’s nasty agenda.

Bill will be furious when Liam and Jarrett take a stand. He’ll realize that plotting Spectra’s downfall won’t be as easy as he’d hoped. Nevertheless, Bill won’t give up. He’ll vow to build his skyscraper exactly where he said he would. Bill will intend on wiping Spectra from the face of the earth, but his scheme could hit a few snags.

Meanwhile, Sally (Courtney Hope) will fret over the debut of her new looks. She’ll worry that she’ll fail without Thomas (Pierson Fode) by her side, but Shirley (Patrika Darbo) will offer reassurance. The Bold and the Beautiful spoilers hint that Shirley will boost Sally’s confidence with some encouraging comments.

Shirley will argue that this is the best work Sally has ever done. She’ll feel like Sally is about to become a fashion force in this town. The Bold and the Beautiful spoilers state that Sally will still have her doubts, but she’ll manage to regain her confidence once the show gets underway. The critics will definitely approve of Sally’s vision.

Unfortunately, Sally’s presentation will come with a showstopper she didn’t expect. When an electrical fire breaks out, the crowd will panic. B&B fans can expect Liam to leap into action. He’ll save the day, but another fire is brewing down the road. It sounds like mean ol’ “Dollar Bill” will try to burn Spectra to a crisp!