The Bold and the Beautiful Spoilers: Sally Declares Her Love, Kisses Liam 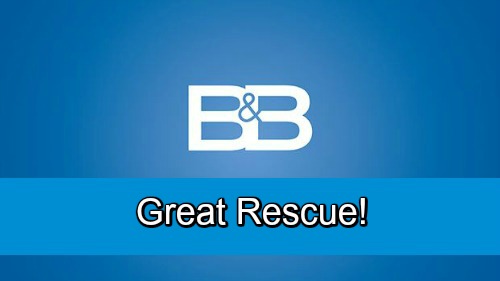 The Bold and the Beautiful (B&B) spoilers for the week of November 6-10 tease that Bill’s (Don Diamont) decision will lead to major consequences. He chose to blow up the Spectra building, so he’ll have to deal with the fallout. Liam (Scott Clifton) and Sally (Courtney Hope) are trapped underneath plenty of debris. They’ll just hope that some heroes can get to them or else they’ll be goners.

Steffy (Jacqueline MacInnes Wood) will join Bill in a desperate race against time. They’ll try to get Liam and Sally out of the rubble before the rest of the building caves in. The Bold and the Beautiful spoilers say they’ll don some hardhats and head into dangerous territory. Bill and Steffy will may have trouble locating the explosion victims in this mess.

Meanwhile, Liam and Sally will find themselves pinned under a huge chunk of the building. They’ll hear creaks when other fragments will fall around them. As the situation grows increasingly dire, B&B spoilers state that Sally will make an emotional confession. She’ll cry as she reveals something she wants Liam to hear.

Sally will suggest that if they don’t make it out of there, Liam should know that she loves him. The Bold and the Beautiful spoilers say they’ll lean in for a sweet kiss and it looks like they’ll lose consciousness.

Nearby, Bill will pull Steffy out of the way when some wreckage heads toward her. Once they find Liam and Sally, the rescue duo will likely call for backup. Steffy and Bill will hope that the injuries aren’t too severe. They’ll urge Sally and Liam to stay with them as they try to get to the hospital.

The good news is everyone will make it out of this disaster alive. The bad news is Sally and Liam’s connection will cause issues. It’s only a matter of time until Steffy finds out about that kiss and Sally’s love declaration.

Of course, Steffy and Bill’s bond could present a problem as well. Forbidden love’s about to bloom on the CBS soap. We’ll give you updates as other details emerge. Stick with B&B and don’t forget to check CDL often for the latest Bold and the Beautiful spoilers, updates and news.