BY Sean O'Brien on November 10, 2017 | Comments: one comment
Related : Soap Opera, Spoiler, Television, The Bold and the Beautiful 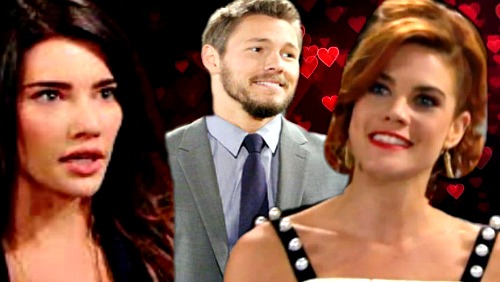 The Bold and the Beautiful spoilers tease that Bill’s (Don Diamont) prediction about nothing good coming from Liam’s (Scott Clifton) interest in Sally (Courtney Hope) will come true. Both conflicted characters will grow closer until they cross the line, again.

Liam feels compelled to tell Steffy (Jacqueline MacInnes Wood) that he kissed Sally (twice) while trapped in the Spectra Fashions’ building rubble. “Not a good idea!”, shouted countless B&B fans after the idealist made that statement.

It doesn’t seem that Liam is in totally love with Sally, at least he isn’t right now. If he was, then it would be best for him to tell his wife what he was feeling, as their marriage would be shaky. His fondness for Sally could become more if he lets it, however.

There are times in life where one can unnecessarily upset a loved one or friend. That can happen when someone feels compelled to bear his (her) soul. The need to do that overrides the logical area of the brain, as resulting outcomes apparently aren’t considered.

Steffy will be absolutely crushed if Liam tells her that he kissed her nemesis. Mrs. Spencer rejected Bill’s past assertion that there was anything going on between Sally and her husband.

Steffy later realized that Bill was right, but chose to think that Sally was the only puppy in love. That’s why Steffy has urged her husband to cut ties with Sally now.

There’s no telling what fallout will result if Liam tells Steffy the details of what happened before she and Bill found him and Sally. At the very least Steffy will feel betrayed and likely uncertain about what Liam’s true feelings are.

Meanwhile, Bill feels that his reunion with Liam has ended and that his son is done with him. It appears as though that sentiment is accurate, as Liam’s conversation with his dad at the hospital didn’t center on the rescue. Instead, he lambasted Bill about Spectra Fashions’ issues, again.

Whether Liam realizes it, or not, he has been falling for Sally. That’s the subconscious reason why he’s become her champion. No married guy is as effusive in his praise for a woman, other than his wife, unless he finds her to be romantically appealing.

Yes, Liam and Steffy thought they were going to die. But the kisses they shared represented attraction, rather than friendship. Friends would have held hands. These characters went beyond that because they are into each other, though to varying degrees.

That seeming end-of-life moment forced out feelings that Sally admitted to. A marriage will end if Liam expresses the same thoughts.

Siam, Steam, or Leffy if one prefers, won’t last long. How can it when all the momentum is moving in a different direction and has been wrapped in a cause that continues?