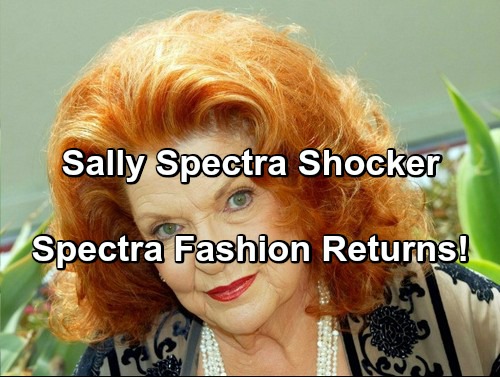 The Bold and the Beautiful (B&B) spoilers tease that another leaked audition video has surfaced on Vimeo and it provides some crucial storyline clues. Whenever any kind of clip pops up, B&B fans are always anxious to see what’s in store. We can often gather interesting tidbits from the dialogue.

This one is for a receptionist named Dora, who’s seems a bit scatter-brained. She mentions the condemned Spectra Fashions building during a chat with the duo who apparently took over. They point out that it was saved from the wrecking ball. Dora wonders if she can rent a room, but they don’t understand why she would want to live in a condemned building.

Dora loses her train of thought and notes that a reporter was looking for Sally Spectra. She suggests that she got rid of him, which causes one of her employers to flip out. The person states that she’s Sally Spectra, but Dora asks if anyone will believe that.

Is someone is posing as Sally Spectra in an attempt to capitalize on some potential revenue? The people running this joint obviously don’t have any cash right now. Dora is being paid through a profit-sharing plan. They have to get some buzz going to generate business.

That’s why it’s important to never turn away the press and Dora is quickly reminded of that fact. She’s ordered to track down the reporter immediately. Of course, there’s always a chance that B&B is bringing back Sally Spectra in the form of a recast. It would be surprising since Darlene Conley was so beloved, but you never know. Regardless, this sounds like a hot plot for 2017.

Many Bold and the Beautiful watchers are hoping to see something new on the CBS soap. They’re expecting more than a tug of war over a love interest. Bringing in a rival fashion house could certainly shake things up. Forrester Creations could use some fierce competition.

With Sally or at least a faux Sally leading the charge, the company could put a serious dent in Forrester’s profits. Even if the rival crashes and burns, it would still be a fun storyline to stir up some excitement among viewers. Entertainment is the key on The Bold and the Beautiful!

So B&B fans, would you like to see Forrester Creations compete with another fashion house? Are you glad to hear about Sally again, even if it’s a just a publicity stunt? We’ll give you updates as other news comes in. Voice your opinion in the comments below and don’t forget to check CDL often for the latest Bold and the Beautiful spoilers, updates and news. Come and join the conversation on our Bold and Beautiful Facebook Group!