The Bold and the Beautiful Spoilers: Sheila and Thorne Scheme – Ridge’s Engagement and Forrester Role In Jeopardy 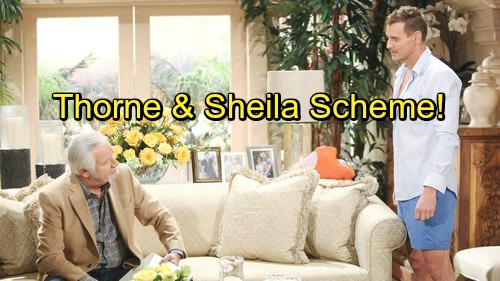 The Bold and the Beautiful spoilers tease that Sheila (Kimberlin Brown) realizes that her goal of getting Eric (John McCook) back might not be immediately (or ever) within reach, so she’s recalculated and has formed new alliances. Meanwhile, Thorne (Ingo Rademacher) is determined to win Brooke’s (Katherine Kelly Lang) hand and push his lout of a brother out of her life. Yes, Sheila’s agenda and Thorne’s are dovetailing on B&B.

Their recent meeting at the restaurant provided fortuitous for Thorne. After Brooke was lassoed by Ridge (Thorsten Kaye), Sheila stopped by to dish Forrester dirt. Quinn (Rena Sofer) was Miss Carter’s target once again. 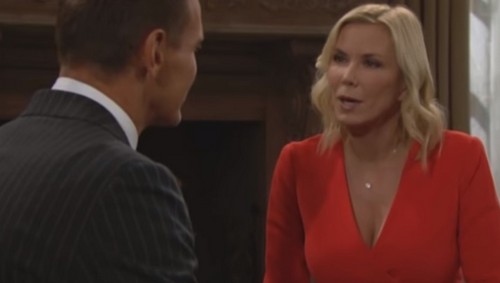 Sheila gleefully told Thorne that Ridge had an affair with Quinn, which is what disrupted Brooke’s remarriage plans and also most recently upset Queric. Thorne was dumbfounded at first, but accepted what Sheila said and later questioned Ridge about it. He also pushed Marone to the floor, which was quite satisfying.

Of course it was a stretch for Sheila to say that Ridge and Quinn were having a full-blown affair because they weren’t. However, they did smooch on a variety of occasions. That high-schoolish term was purposely used as Quidge behaved like tenth graders instead of middle-aged adults.

Sheila and Thorne would love if Quidge revived their crush as soon as possible. Doing so could likely subtract both people from the lives of Eric and Brooke as soon as Sheila and Thorne gossiped to everyone about them during gym class. This intertwined storyline feels rather juvenile, doesn’t it?

Now, back to the soapy points that are being made. Sheila remains a threat to Eric simply because she’s remained in Los Angeles and continues to intentionally interact with people that he’s close to. Her new link to Thorne followed Pam’s (Alley Mills) recent agreement to become friends. Both connections are troubling and potentially dangerous, as Sheila has always been and remains a wild card. 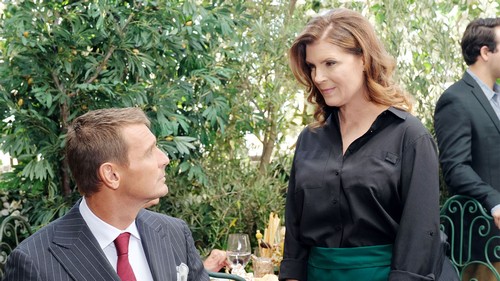 Thorne is an absolute thorn (sorry, this phrase had to be used at least once) in Ridge’s side. Kaye’s character was working his way back to Brooke after she finally give Bill (Don Diamont) the boot. But Thorne’s return home and interest in the woman who is an ex-wife to both has created a personal dilemma.

Eric has twice stated that he favors Thorne, who’s become Brooke’s house guest, standing up to his brother. That appears to telegraph McCook’s character allowing Thorne to run the company with Ridge in the near future. That business move would provoke major drama, which is why B&B airs and remains popular.