The Bold and the Beautiful Spoilers: Sheila Remarries Eric – 3 Reasons Why She Succeeds 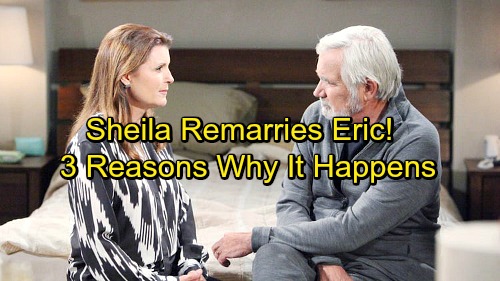 The Bold and the Beautiful spoilers tease three reasons why Sheila (Kimberlin Brown) will remarry Eric (John McCook). As far-fetched as it may seem, Brown’s character is positioning herself to tip the balance of power from Quinn (Rena Sofer) to herself.

Each reason shown below could independently lead to renewed nuptials between Eric and Sheila, or they could all blend together to create Sheric.

Believe it and then achieve it. That has long been Sheila’s outlook on life. It’s why she commissioned a striking painting of herself, the oil-based version of which is outfitted in a Hades’ red dress. Sheila’s goal is to have that curious work of art hung above the mantel in the small living room at the main Forrester estate. Hey, soap sets only occupy so much space.

Quinn’s portrait will be recycled by Mateo (Francisco San Martin), who is environmentally conscious. Of course, he’s amoral when it comes to her marriage vows. But human beings have always practiced subjectivity.

Sheila has survived countless battles against numerous foes. Heck, she’s still alive which is incredible. Combine all factors and Quinn’s days are numbered. 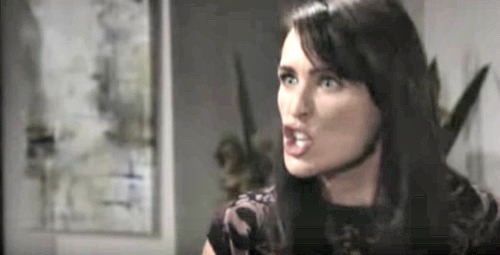 Now that Quinn discovered Kwyatt she’ll be fixated on her son, thereby leaving space for Sheila to make a move on her husband. Katie (Heather Tom) is one of Quinn’s various enemies and the current Mrs. Forrester is always up for a fight.

The resulting tension will play into building problems between Eric and Quinn. He decided to overlook her indiscretion with Ridge (Thorsten Kaye), but also doesn’t want his trust to ever be violated again.

However, what if Eric betrays Quinn’s trust? Will she be as forgiving? No.

Sheila addressed the crazy rumors about her identity upon returning to Los Angeles. Apparently, residents in some Wisconsin town that doesn’t appear on any map believed that a woman who looked like Phyllis (then played by Michelle Stafford in a very unusual dual role) was claiming to be Sheila more than 10 years ago. That sounds like something a soap opera would concoct, but no it really happened within Y&R’s fictional reality.

Lauren (Tracey Bregman), the woman who killed the apparent fake Sheila, was Sheila’s main nemesis long before Quinn grabbed that title. That’s why Eric’s choice to not immediately call Lauren the day Sheila returned to Los Angeles didn’t match B&B’s or Y&R’s connected backstories. Fans of both shows know that Eric also flew to GC about a year ago to help Lauren bluff Jack (Peter Bergman) during the Fenmore’s investment negotiation, which made Eric’s non-action strange.

When Lauren is told, or learns about Sheila being alive she’ll jet to LA. The fuss she’ll raise will serve to up Eric’s sympathy level for Sheila, who he once deeply loved.

After that door opens, Miss Carter will make a successful move. Eventually, she’ll wear Eric’s ring as well. CDL is a leading source for everything linked to The Bold and the Beautiful. Check back regularly for B&B spoilers and news!