The Bold and the Beautiful Spoilers: Steffy Battles Her Bad Conscience – Cheating Secret Hangs in the Balance

BY Sean O'Brien on December 4, 2017 | Comments: one comment
Related : Soap Opera, Spoiler, Television, The Bold and the Beautiful 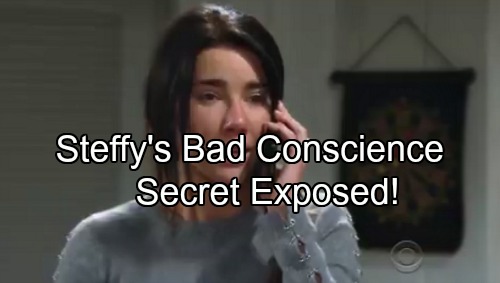 The Bold and the Beautiful spoilers tease that Steffy (Jacqueline MacInnes Wood) will remain mum about her tryst with Dollar Bill (Don Diamont) for the moment. However, her emotions are frazzled and maintaining this incredible secret will create an increasingly weighty mental burden. However, B&B fans wonder if Steffy will eventually pull a Liam (Scott Clifton) and spill her guts about what happened?

Liam made a boneheaded choice when he felt compelled to come clean with his wife. If he had been having an affair with Sally (Courtney Hope), or chose to passionately kiss her in her office under normal circumstances, then his admission would have been advisable. In those scenarios he would have been unburdening his soul. 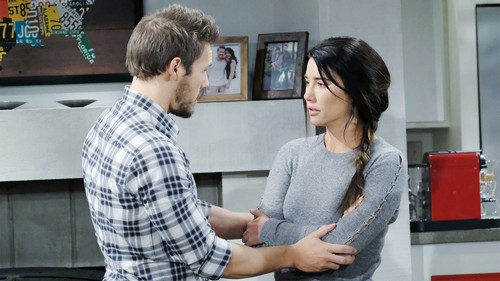 Yes, Sally and Liam did kiss each other twice on the Spectra Fashions’ grounds. As viewers know, those characters were literally lying on the grounds, pinned by fallen debris after the building was brought down. They thought their lives were about to end and shared an understandable moment.

If Liam wouldn’t be such an analytical goof he would have realized that Steffy would be instantly devastated by his dramatic description of said circumstances. His presentation of the event naturally pushed Steffy’s buttons because of who he specifically kissed.

Steffy then ran to Bill, a former flame who she’d been consoling in recent months. Dollar Still was revived, which reminded the momentary lovers that they were seemingly better-paired then Bill was with Brooke (Katherine Kelly Lang) or Steffy was with Liam.

But upon awaking after the physical workout, Steffy realized what she’d done and was horrified. Bill, had a different reaction. He was convinced that Steffy would tell Liam what happened and leave her husband. Dollar Still would then leave the country to celebrate their long-delayed pairing.

Steffy felt differently and was further overwhelmed by Liam’s pop-up remarriage plan. Leffy renewed their vows and that was that, until Steffy’s guilt burrowed deeper into her soul within the last week-plus.

Only Dollar Still fans, or those who think Liam is a jerk want Steffy to tell her husband what she did. But maybe there’s one person who actually wants that scene to play out as well?

If Steffy believes, underneath it all, that Diamont’s character is her actual better half, then she will tell Liam what happened. Yes, Steffy may purposely sabotage her marriage in order to open the door to Bill without even fully realizing that her subconscious had driven her to do so.