The Bold and the Beautiful Spoilers: Steffy’s Joy Turns To Horror – Liam Learns The Truth

BY Sean O'Brien on December 22, 2017 | Comments: one comment
Related : Soap Opera, Spoiler, Television, The Bold and the Beautiful 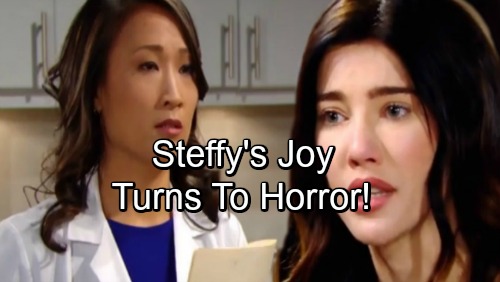 The Bold and the Beautiful spoilers tease that Steffy’s (Jacqueline MacInnes Wood) initial joy will turn to horror when Liam (Scott Clifton) accidentally learns that his wife and father slept together. The good news about Liam being tagged as the father of Steffy’s baby will be upended by a reveal that will totally upend B&B.

Steffy and Bill (Don Diamont) were rightly panicked. They knew there was a chance that their night of passion was going to result in Bill fathering another child.

The implications of that anticipated paternity result were frightening, as Bill believed that the child should be raised by her, or his biological father. So Steffy is understandably relieved to learn on next week’s new B&B episodes, December 26-29, that the rushed paternity test she had done yielded the answer she wanted; Liam is the dad. Tragically for Steffy, subsequent developments will show that these initial paternity rest results are invalid and in fact Bill could be the baby daddy.

As B&B fans recall, Steffy submitted two DNA samples (Liam’s and Bill’s), along with her own blood sample so that the paternity test could be conducted. Steffy asked the doctor to be very careful when drawing blood so that a mark wouldn’t show.

Risk is applied whenever any one person allows another human being, or more than one, to know anything personal. So it’s not as though Liam will see a needle prick on Steffy’s arm and suddenly conclude that she had a paternity test because she slept with Dollar Bill.

However, Liam has been asking his wife a lot of questions in recent weeks. He’s observant, curious and persistent, which would be good for Steffy if Liam were her watch dog, instead of a committed husband.

Whenever Liam asks whatever he will, Steffy will lie again. She has to distract, dissuade or outright fib in order to close off any holes in the number of stories she’s been telling. And then there are all those people who are connected to the referenced paternity test.

One of them could leave a message for Steffy that Liam intercepts. Liam could somehow run into a nurse, or lab tech, or whoever that he knows from somewhere. That person will reference Steffy’s recent tests, thereby sending him on an information search mission. Although, this inevitable reveal could develop in a far simpler way as well.

Bill and Steffy are talking about what they did, as they’ve done ad nauseam. Someone will overhear them and eventually spill the beans to Liam. Wyatt (Darin Brooks) is a likely candidate in this regard.

Of course, the ubiquitous Sheila Carter (Kimberlin Brown) could gain this scandalous knowledge as well because she’s B&B’s resident villain. Just imagine how she would use and manipulate that news!