The Bold and the Beautiful Spoilers: Thorne Strives To Break Ridge and Brooke’s Engagement – Will He Succeed?

BY Sean O'Brien on December 17, 2017 | Comments: one comment
Related : Soap Opera, Spoiler, Television, The Bold and the Beautiful 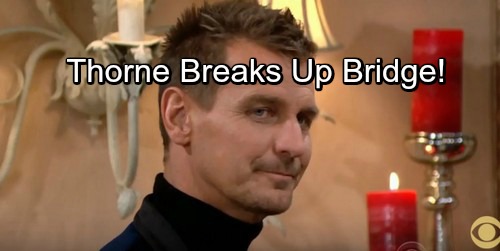 Thorne’s recent interaction with Sheila (Kimberlin Brown) will prove to be useful. They have mutual interests, which will be used to further separate agendas.

As B&B viewers have seen, Sheila’s return to Los Angeles wasn’t intended to establish Brown’s character as central to any storyline (to-date). It’s possible this scribe missed it, but Brown’s face doesn’t appear in any open credit’s sequence. That alone makes Miss Carter a secondary player. 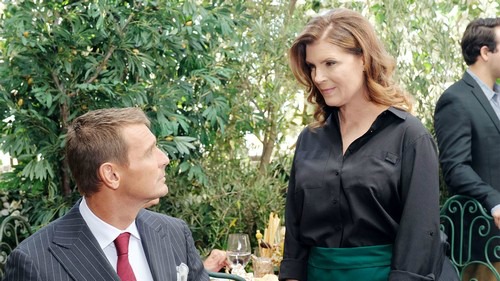 However, Sheila was eager to serve as Thorne’s information ally. She’s the reason he knows Quinn (Rena Sofer) and Ridge kissed. Sheila’s open offer of assistance will surely be tapped by Thorne moving forward. How, or if, she’s able to leverage that help for her own purposes remains to be seen, as Thorne would never willingly put his father in danger. As B&B fans know, Eric (John McCook) remains Sheila’s focus.

Regarding Quinn, one point needs to be underscored. Ridge’s use of his somewhat girlfriend to prepare Brooke’s engagement ring was outrageous. Why would big brother task the woman he foolishly kissed the day before his proposed wedding to Brooke in Australia with creating something so personal?

Thorne believes that Brooke allows Ridge to talk his way out of anything. Possibly, when Quinn is revealed as the ring’s creator, Ridge will claim that they (Quidge) wanted to do something to correct the past. Yes, in their minds they were redeeming themselves. Let’s go with that.

Just moments prior to proposing to Brooke, Ridge acknowledged that he had behaved like a child in the past. It’s not that he was acting childishly in tasking Quinn as his ring-maker. But only a naive person would think that Brooke would somehow be okay with his decision.

Thorne wasted no time in expressing his feelings to Brooke, Ridge and Eric since returning from Paris. He’s told Brooke that he wants to marry her, although he didn’t formally propose. He’s confronted Ridge about their sibling rivalry and warned big brother that his days as king of the hill are over. Thorne also told Eric that he wants to be a designer and shared his intent to remarry Brooke.

Savvy soap fans may believe that Brooke and Ridge won’t have a quickie wedding, as Thorne’s insertion into the wedding picture can easily be mined for months. B&B viewers would then also assume that an engagement period will unfold, which would then allow Thorne to attempt to overcome Ridge’s charm.

It does seem like Brooke is most enchanted with Ridge. The bond of their son and the multiple past nuptials further indicates that Bridge was, is and will be a couple. But Thorne is bound and determined to create a better future for the woman he claims to love more than anyone. So the devoted audience will see what transpires in Los Angeles.