BY Heather Hughes on November 8, 2017 | Comments: one comment
Related : Soap Opera, Spoiler, Television, The Bold and the Beautiful 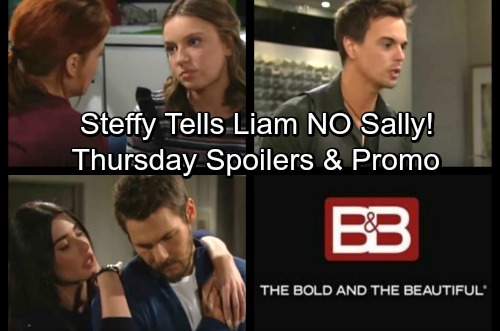 The Bold and the Beautiful (B&B) spoilers for Thursday, November 9, tease that Wyatt (Darin Brooks) will offer Bill (Don Diamont) his support. Bill will be busy beating himself up over what happened with Liam (Scott Clifton). He’ll tell Wyatt that he destroyed all the progress he made.

Bill will fret over breaking Liam’s trust and obliterating any chance of reuniting with Brooke (Katherine Kelly Lang). Wyatt will admit that the Spectra incident was unfortunate, but he won’t think Bill should feel guilty about it. He’ll argue that Sally (Courtney Hope) and Liam’s ordeal wasn’t Bill’s fault.

Bill had no idea they went back in the building. It was a pretty idiotic move on Liam and Sally’s part. However, they wouldn’t have been in that situation if Bill hadn’t been so stubborn. Wyatt won’t see why Bill should have to change for Liam. He’ll praise Bill’s great business sense and promise to be behind him no matter what.

Wyatt definitely has Bill’s back, so that could lead to more conflict with Liam. For now, Liam will have to deal with Steffy’s (Jacqueline MacInnes Wood) drama. She’ll once again try to get through to her husband. Steffy will push Liam to cut ties with Sally and let her figure out her own future. She won’t think Liam needs to keep derailing his own life just so Sally can be happy.

Liam will likely refuse to turn his back on Sally, especially after enduring those scary moments together. Their bond should be tough to break. Meanwhile, Sally will have a chat with Coco (Courtney Grosbeck). The Bold and the Beautiful spoilers say Coco will rant about Bill’s actions and insist she’ll never forgive him for tearing down Sally’s dreams.

Coco will also pick up on her sister’s growing feelings. She’ll call Sally out on her love for Liam in Thursday’s B&B episode. Sally will likely confess that she cares about Liam more than she should. She’ll even come clean about that kiss at some point.