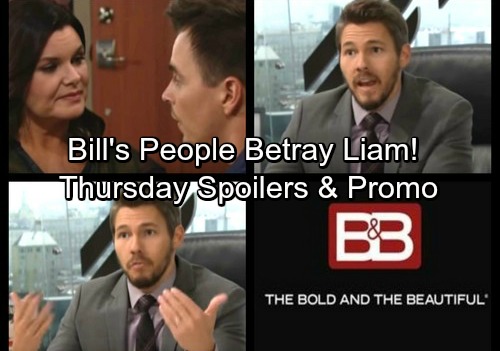 The Bold and the Beautiful (B&B) spoilers for Thursday, October 19, tease that Justin (Aaron D. Spears) will swipe important info from Liam’s (Scott Clifton) office. He’ll be looking for a password or anything else that could help Bill (Don Clifton) reclaim the throne. Justin may work for Spencer Publications, but he’ll always be Bill’s right-hand man.

Liam won’t be in the loop on Justin’s digging, but he’ll definitely have doubts about his loyalty. The Bold and the Beautiful spoilers say Liam will bring up Bill’s revenge scheme. Justin might fib that he has no idea what Bill has in mind, but Liam will know better. He’ll insist that he’s going to be keeping a close eye on Justin. 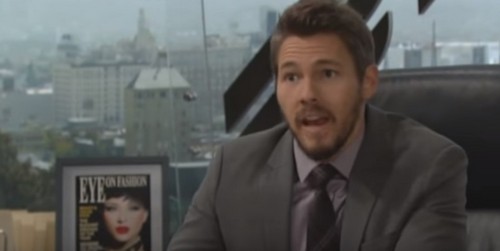 Liam will offer a reminder about who’s in charge now. He’ll point out that Justin is a Spencer employee, so he needs to obey the rules and follow instructions. Liam will contend that if Justin makes a move against him, he’ll be out of the company. One strike is all it’ll take to leave Justin unemployed.

Of course, Bill’s got plenty of money to toss around. He’ll undoubtedly reward Justin for his loyalty no matter what. Besides, the last thing Justin wants to do is provoke Bill’s wrath. He’s known Bill long enough to predict a comeback. Like Bill, Justin believes that Liam’s power trip is only temporary.

The Bold and the Beautiful spoilers state that Justin will ignore Liam’s warning and focus on helping Bill succeed. Bill will also get some help from a tech guy named Ken (Danny Woodburn). This eccentric character will do whatever he can to delete the incriminating evidence. Bill’s counting on him to make his problem disappear!

Meanwhile, Katie (Heather Tom) will give Wyatt (Darin Brooks) updates on her chat with Brooke (Katherine Kelly Lang). After she shares the divorce news, B&B spoilers say Wyatt will grow concerned. Bill’s officially losing Brooke, so Wyatt will assume vengeance is on the way. He’ll think that one day soon, Liam will wish he’d never set this in motion.

It sounds like some great scenes are coming up. We’ll keep you posted as other B&B details emerge. Stay tuned to the CBS soap and don’t forget to check CDL often for the latest Bold and the Beautiful spoilers, updates and news.