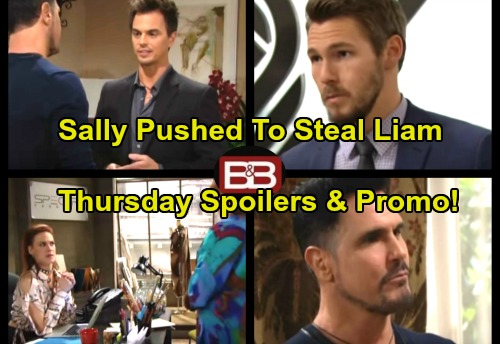 The Bold and the Beautiful (B&B) spoilers for Thursday, October 5, tease that Liam (Scott Clifton) will defend his decision. Steffy (Jacqueline MacInnes Wood) just found out about Liam’s trip companion and she’s not happy. Sally (Courtney Hope) is going to San Francisco with Liam, but not before Steffy gives her husband a stern lecture.

Liam might point out that the theft was basically Bill’s (Don Diamont) fault, too. He drove Sally to it with sabotage. Besides, Sally has shown remorse and is trying to head down a new path. Steffy will undoubtedly wish Liam could be that forgiving with Bill. She feels like her father-in-law deserves a second chance, but Liam just isn’t willing to give him one. 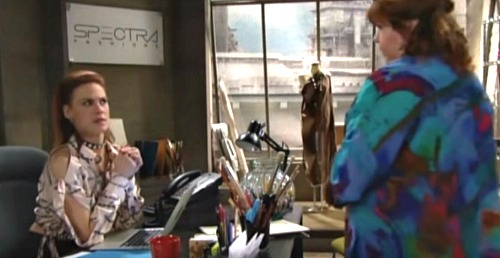 The Bold and the Beautiful spoilers say Liam will make a passionate speech. He’ll note that taking over Spencer Publications was about something important. This isn’t just a vengeful tactic. Liam truly wants to make a difference and lead the company in another direction.

While Liam and Steffy’s conflict heats up, Shirley (Patrika Darbo) will push Sally toward her new hero. She’ll contend that Sally is a much better match for Liam than Steffy. Sally will suggest that she has no intention of stealing from the Forresters again. That includes taking their husbands.

Of course, things could change as Liam and Sally’s connection grows stronger. It should be interesting to see just how close they get. Elsewhere, Wyatt (Darin Brooks) will have a confession to make. He’ll tell Bill that Liam asked him to help run Spencer. Naturally, Wyatt will promise that he’s not accepting the offer. He’ll insist that Bill’s the one who needs to be in charge.

Wyatt will also look the other way when Bill gets rid of some incriminating documents. He’ll do everything he can to prove his loyalty. The Bold and the Beautiful spoilers state that Bill’s revenge will hit Liam hard, so Wyatt may be glad he supported his old man. Perhaps he can avoid getting caught in the fallout.

More excitement is brewing, so B&B fans should stay tuned! We’ll give you updates as other news comes in. Stick with the CBS soap and don’t forget to check CDL often for the latest Bold and the Beautiful spoilers, updates and news.